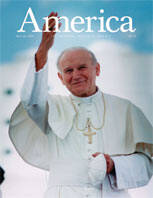 Because Karol Joseph Wojtyla was Polish-born, his election as pope on Oct. 16, 1978, was met with widespread skepticism within the Jewish community. There was concern that the new pope would reflect the traditional anti-Semitism that marked much of Jewish history in Poland. But John Paul II proved the skeptics wrong. His extraordinary contributions to building mutual respect and understanding between Catholics and Jews are historic in nature, and he will be remembered as the best pope the Jews ever had.

In addition to the pope’s own theology, both geography and chronology were partly responsible for his unique relationship with Jews and Judaism. On the eve of World War II in 1939, when the future pope was 19, the Polish Jewish community of three-and-a-half million was a center of rich spiritual, intellectual and cultural resources, and represented 10 percent of that country’s total population. In his native Wadowice, a quarter of young Karol’s schoolmates were Jews.

Wojtyla was a young man during the German occupation of Poland and was a personal witness to the Shoah (the Hebrew term for the Holocaust) in which six million Jews were murdered throughout Europe. But Poland was the Nazis’ chief killing field, and the monstrous Auschwitz-Birkenau death camp was not far from Wojtyla’s own hometown. By war’s end, over three million Polish Jews had been killed.

After that horrific experience, Pope John Paul II needed no academic seminars or scholarly papers to instruct him about the radical evil of the Holocaust. The tragedy was indelibly etched in both his head and his heart. During his first papal visit to Poland, in June 1979, John Paul II knelt in prayer before the stone marker that had been set up in memory of the Jews murdered at Auschwitz-Birkenau. In later years he called the Shoah an indelible stain on the history of the century.

In his travels, the pope actively sought visits with the Jewish communities in many lands, and he repeatedly condemned anti-Semitism, the hatred of Jews and Judaism, as a sin against God. John Paul II’s visit to Rome’s Grand Synagogue on April 13, 1986, was the first by a pope to a Jewish house of worship since the days of the Apostle Peter. In his synagogue address, the pope reminded Catholics that Jews are our elder brothers in faith and that the Jewish covenant with God is irrevocable. On April 7, 1994, the pope hosted a historic Vatican concert to commemorate the Shoah. I was present at that occasion and vividly remember John Paul II’s poignant plea never to forget the Jewish victims of the Holocaustamong whom were many of his childhood friends and classmates.

A few months earlier the Holy See and the State of Israel had established full and formal diplomatic relations. This important action, combined with the pope’s public denunciations of anti-Semitism and his reverent remembrance of the Holocaust, changed the initial Jewish perception of John Paul II. His personal intervention in 1995 satisfactorily resolved the decade-long crisis over the location of a convent in Auschwitz. As a result, the Carmelite nuns left the death camp building where the Germans once stored the poison gas used to kill Jews.

On March 12, 1998, the Vatican released We Remember: A Reflection on the Shoah. Although there was much criticism from both Catholics and Jews about the document itself, John Paul II’s brief introductory letter was universally praised. In it the pope urged Catholics to examine themselves on the responsibility which they too have for the evils of our time.

Two years later the pope visited Israel. Once again I was privileged to be present at an important event in his pontificate. Unlike Pope Paul VI’s brief visit to Israel in the mid-1960’s, when the pontiff never once mentioned the name of the Jewish state, John Paul II was an honored guest at the official residence of the Israeli president and in the offices of the Chief Rabbinate. The pope’s sorrowful visit to Yad Vashem, the Israeli Holocaust Memorial, where he met with Polish Jewish survivors, was televised around the world. The most lasting image of the entire pilgrimageperhaps of his entire pontificatewas John Paul II’s slow walk to the Western Wall in Jerusalem, Judaism’s holiest site, and his insertion of a prayer of reconciliation into one of the wall’s many crevices.

But there were also serious Catholic-Jewish flashpoints during John Paul II’s long reign. In June 1987 he accorded full diplomatic honors to President Kurt Waldheim of Austria during a visit to the Vatican. At the time of the visit, the United States had placed Waldheim on its watch list and had forbidden him entry into the United States because of his wartime activities in the Balkans. After years of hiding his record, Waldheim was accused of participating in war crimes against Jews and other groups. The intense negative reaction to the Waldheim visit nearly caused the cancellation of the pope’s scheduled meeting a few months later with American Jewish leaders in Miami. But the meeting took place, and the pope electrified his audience by declaring, Never again! in reference to the Shoah. John Paul II had yet another highly successful meeting with Jewish leaders during his visit to the United States in October 1995.

Toward the end of his long pontificate, however, some serious problems arose in Catholic-Jewish relations, most notably the question of making the appropriate wartime records of the Vatican available to a team of Catholic and Jewish historians. It is an issue John Paul II’s successor must confront if those relations are to grow in strength. When the Vatican document Dominus Iesus, issued in 2000, did not specifically mention Jews or Judaism, questions were raised as to whether the Holy See had abandoned the pope’s strong commitment to positive interreligious relations. In early 2004 there was another flashpoint when the pope appeared to offer an endorsement of Mel Gibson’s film The Passion of the Christ. John Paul II was reported to have seen it at a private screening and commented, It is as it was. Vatican sources were quick to deny any papal approval of the film, but the controversy remained. A year later the pope’s new book, Memory and Identity: Conversations Between the Millenniums, drew criticism from some European Jewish groups. They charged that he unfairly compared the evil of abortion with the horrors of the Shoah. Vatican officials claimed that this was a misinterpretation of the pope’s words.

But by the time those issues arose, John Paul II was already covered with the mists of legend. In death, he has earned an imperishable place in Jewish history, because under his gifted, indeed revolutionary leadership, the Catholic Church intensified the long overdue process of healing its relationship with its elder brother.

My most vivid memory, after 10 meetings with John Paul II, goes back to an encounter in the papal library in 1990. When he learned that our American Jewish Committee leadership delegation was flying from Rome to Warsaw the next day, John Paul II grew rhapsodic, began to sway and said, Ah, Friday afternoons, Sabbath candles in the windows, psalms being sung, children’s voices.... He was mentally back home among his Jewish neighbors and friends in Wadowice. I think he really never left them.

Rabbi A. James Rudin is a senior interreligious adviser for The American Jewish Committee.