Carrying On: One family's Christmas tradition 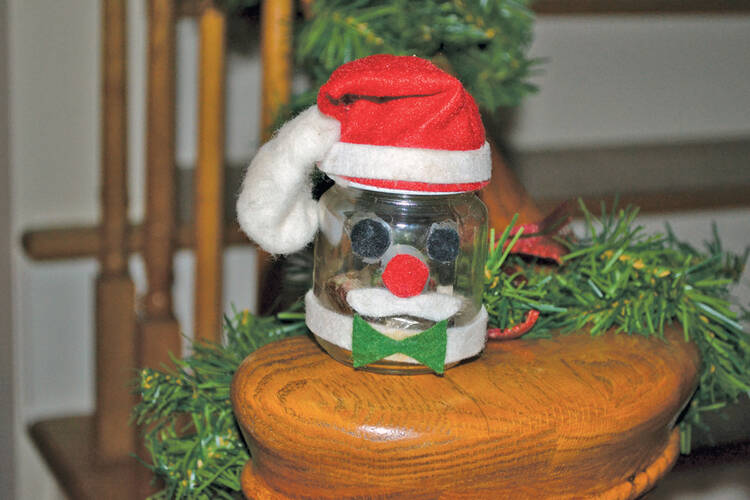 More than 25 years ago, I came home from pre-school and presented my mother with a cleaned-out baby food jar decorated to look like the face of Santa Claus. The jar contained three red and green starlight mints and bore a lopsided felt hat, vacuous felt eyes and a felt moustache and bow tie, but, inexplicably, no signature beard. It looked more like the old mascot for the Papa Gino’s pizza chain than it did Père Noël. Still, my mother proudly placed it on display in our home. Every year since, she has done the same.

Given its age, the creation has held up remarkably well, save for the starlight mints, which have turned a sickly, sticky brown. Yes, the mints are still there. This is partly because we are afraid to open the jar and partly because of: Tradition!

The Weber family takes our traditions seriously, and occasionally to the point of absurdity, especially where Christmas is involved. Consider, for instance, our dedication to watching the 1978 classic “Christmas Eve on Sesame Street” every Christmas Eve. I don’t recall which year, exactly, we started watching it, but I also can’t recall one when we didn’t. The tradition began sometime before “Sesame Street” acquired a kind of retro cool and has continued long after my siblings and I passed the drinking age.

The early viewings involved a version of the film we recorded ourselves with a Beta videotape recorder from a fuzzy PBS channel by way of an antenna. Sometime in the 1990s we broke down and purchased a legitimate copy on VHS. This is the version we currently watch because, once we pull out the old VCR and find the cords and figure out how to hook it up to the TV and rewind the tape, it still works. Like I said: Tradition!

The film’s main plotline revolves around Big Bird’s efforts to discover how Santa Claus gets down chimneys. Wackiness ensues. But the film’s best parts are in the secondary plots and smaller moments: Kermit the Frog interviewing children of the ’70s; Bert and Ernie living out their own version of O. Henry’s “The Gift of the Magi”; Cookie Monster’s efforts to write a letter to Santa, but instead eating every writing implement he gets his hands on.

Of course, like most films, there are a few flaws. My dad, an engineer, complains when Oscar the Grouch falls through a load-bearing wall that appears to be made of nothing more than a sheet of drywall. As a frequent rider on New York City public transit, I marvel at the width of the suspiciously spacious subway car onto which the Sesame Street residents manage to carry a full-sized Christmas tree without complaint. And we all grin at each other and mumble along with Patty, a friend of Big Bird, as the young actress sniffles through her saddest lines: “Big Bird’s gone.” (Spoiler alert: He’s on the roof of an apartment building, looking for Santa.) Despite our sympathy, we can’t help but be distracted by the fact that Patty’s lips barely move when she delivers the news.

Still, for the most part, our family watches the film without irony. So when the characters walk along the sidewalks of “Sesame Street’s” New York and onto the subway while singing about Christmas miracles, we Webers join in the song. (Once, on a relatively empty A train, my sister and I tried to recreate our own version of this scene, but it wasn’t quite the same without the Muppets or the ability to sing on key.) And when a crowd of “Sesame Street” kids launches into “Keep Christmas With You”—a song about maintaining the spirit of Christmas throughout the year—we join in both the sung lyrics and the accompanying gestures in American Sign Language. The film isn’t religious by any means, but its message of love and of belief in things we can’t quite explain is not lost on a Catholic imagination.

Despite the Weber family endorsement, I seldom come across an individual who is familiar with “Christmas Eve on Sesame Street,” and it rarely pops up on television. Which is why I was so thrilled last year when a friend told me about a showing of the film at a local museum. I immediately marked it on my calendar and began daydreaming of the theater as an enormous version of the Weber family living room (but with the luxury of a clearer, larger screen) filled with people who also have memorized every magical moment.

But, of the eight million people in New York City, only about 50—mostly hipsters and, appropriately, parents with young children—showed up to this Saturday afternoon screening. We settled in, scattered throughout the theater. The collective enthusiasm in the crowd barely matched that of any single member of my family. And when “Keep Christmas With You” blasted through the speakers, I started to sing along in American Sign Language, but no one joined in. This probably should have been less surprising to me than it was.

It wouldn’t be hard to criticize my family’s routine—five full-grown adults watching puppets—as childish. But I see it as a time when we simply come together, let go of the stresses of the season and allow ourselves to be present. We forget about the cynicisms and the blame, our faults and our fears. We aren’t children anymore, but once a year, for just an hour, each of us feels childlike.

In the end I know that as entertaining as the “Sesame Street” gang can be, it’s not the film itself that prompts this change so much as it is the desire to sit down and remember the importance of those things that we believe but cannot see. And in this sense, strange as it may sound, this family movie time echoes an hour we always spend together earlier in the evening, the Christmas Eve Mass—another Weber family favorite.

Sitting in a pew at the cathedral, we are reminded not only of the transformative power of one child, but also of the need to trust in the value of the childlike humility we are all called to embody. It is a time when we are asked, once again, not simply to remember Christ’s love, but to take up our place in the long line of those who have come after him—proclaiming a message of joy, peace and redemption—and to continue every day, in one voice, as one family in Christ, to carry on that tradition.

@Kerry_Weberweber@americamagazine.org
Show Comments (
1
)
Comments are automatically closed two weeks after an article's initial publication. See our comments policy for more.
John Swanson
9 years 1 month ago
Christmas traditions are really important. What my adult children remember amazes me. Years ago I composed dinner readings for the Advent wreath. (I am sure I "stole" many of the ideas from elsewhere.) My daughter now is 27 and I can't remember when she last went to Mass. As a young woman she is totally disenfranchised with the Church. Last night she came home for a Christmas visit. Tonight as we opened our Advent prayer books, she joined in with the special prayers we have for the O Antiphon days. And I almost cried when I heard her voice join in with singing the verse we do from O Come, O Come Emanuel—“O come, O come, Thou Wisdom, Son Divine . . .” What this means, I am not sure, but I sense that something stuck from our years of celebrating together God’s love.