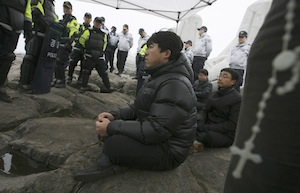 In a letter from jail, John Lee Young-chan, a Korean Jesuit priest, decried increasing military tensions in Northeast Asia and asked South Korea and other nations to “join in solidarity, not inciting war but in ameliorating the situation and in leading toward a reduction in weapons.” Father Lee Young-chan was arrested in October while protesting the use of excessive force against a female activist who had attempted—with more than 300 others in recent months, including several Jesuit priests—to protest nonviolently the construction of a Korean naval base on Jeju Island. He is currently imprisoned without bail as he awaits trial. “I pray that Jeju may avoid becoming a shrimp caught in a whale fight” between China and the United States, “but rather prevent the whale fight and become a place brimming with life and peace,” he wrote.

The Jeju naval base is proposed to become home to a fleet of 20 South Korean warships, set to patrol the sea between China and Japan. The justice and peace committee of the South Korean bishops’ conference has released a statement opposing construction of the new base and demanding the immediate release of Father Lee Young-chan. The naval base “can only increase the sense of military tension…and thereby instigate a crisis,” wrote Bishop Matthias Ri Iong-hoon, who also expressed concern that “construction is destroying the coastal ecosystem.”

The United States, which operates more than a dozen military bases in Japan and South Korea, is partly responsible for this pattern of military aggression in the region, in which North Korea is also complicit. All sides must take meaningful steps to reduce the tension. “Why must there be more battleships and aircraft carriers?” asked Francis Mun-su Park, S.J., director of the Jesuit Research Center for Advocacy and Solidarity in Seoul. “There should be more cultural exchange and efforts for peace.” As a first step, the South Korean government should immediately release Father Lee Young-chan and stop base construction.

Pope Benedict XVI’s new book, Jesus of Nazareth: The Infancy Narratives, has already been translated into nine languages, with 11 more translations planned. This is the final book of a trilogy. The first volume focused on Jesus’ life and ministry, the second on his passion, death and resurrection. The books evince not only the pope’s deep personal love for Jesus Christ but also his flair for what might be called theological spirituality, combining exegesis of the Gospels with applications for the everyday Christian.

At the outset of this multiyear project, not everyone was convinced that it was a good idea for the pope to spend, as the papal spokesman Federico Lombardi, S.J., put it, “every free minute” of his spare time writing a book. Given the recent upheavals in the Roman Curia, including the “papal butler” scandal, some thought the pope might have better spent more of his time on church governance. Others were concerned that Catholics might be confused about the level of authority the books carry. Does what Benedict write about Jesus carry the full weight of papal authority?

Both critiques seem beside the point. In addition to the roles of governing and sanctifying, a bishop also assumes the role of teacher. And Joseph Ratzinger (this name appears on the book cover above “Pope Benedict XVI”) excels at theology. Why should he not share his reflections on the person who is the heart of our faith? As for the book’s authority, the author states clearly in the first volume, “It goes without saying that this book is in no way an exercise of the magisterium.... Everyone is free, then, to contradict me.” A few Scripture scholars have already done so; more will no doubt follow. Many other readers, however, will profit from the pope’s lifelong quest to understand the man whose vicar he is.

A priest set out on the road from Manhattan to Jersey City. As he was about to descend to the commuter rail, he saw a man sprawled out, still as if in death, face down on the sidewalk, his head pressed against a grate and the wire of his iPod entangled. The priest was used to seeing shabby, smelly, homeless men crumpled up asleep in doorways or sprawled under bushes in Central Park.

This was different. Five bystanders stood staring. None approached. The priest, knowing he could never again preach on the Gospel of Luke if he passed this man by, came up and took his hand. With a vacant stare, the man looked up. The priest pulled up, but the man pulled down. The priest tried to reposition the man’s legs, take both hands and heave back.

“Leave him be,” said a young man who stepped out of a restaurant. “He does this all the time.”

It was a con. The man amused himself by embarrassing gullible people of good will.

The priest had been “had.”

Fooled, he turned back to the subway stairs. As the priest glanced south, the fallen man was up and walking away; he had pulled off his trick again. The voice of the man from the restaurant followed the priest down the stairs: “Thank you. You were nice.” Better to be had than to pass by.

The Editors
Show Comments (
1
)
Comments are automatically closed two weeks after an article's initial publication. See our comments policy for more.
8 years 2 months ago
I just finished reading Jesus of Nazareth: From the Baptism to the Transfiguration.  I'm next dipping into this one on the infancy narratives as it's very close to Christmas.  I'll probably save the last volume for Lent as I prepare for Easter.  My first and I suspect lasting impression from reading Benedict XVI's masterful writing is awe.  I'm not so much awed by him or his writing but rather I felt that I was being introduced to Jesus of Nazareth himself. Many a life of Christ has been on my book shelf but this approach is more rich in biblical witness and  full ostraighforward commentary.