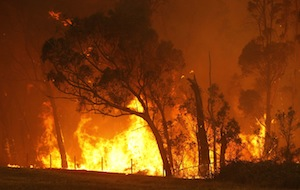 Massive forest fires, tornados and derechos, enormous glacial calving, extreme drought, melting of the Greenland ice sheet: Just weather? For climate skeptics, 2012 may prove a moment for conversion. This has been the warmest year in the warmest decade on record. Now James Hansen, the National Aeronautics and Space Administration climatologist who first warned about global warming, reports that scientists are convinced that these recent weather events are not a matter of natural variation. “We now know,” he said, “that the chance of these extreme weather events happening naturally is negligible.” The natural changes in weather from day to day, year to year, fail to explain the increasing incidence of extreme weather. Indeed, the extreme weather earth has been experiencing has occurred far faster than he had predicted.

The long-time climate-change skeptic Richard Muller, a physicist at the University of California, Berkeley, agrees. “Global warming is real,” he says, “and humans are almost entirely the cause.” The time has come to have a serious national debate, not about whether global warming is taking place, but rather what we are going to do about it.

The low-key exchanges about the U.S. energy future during the current political campaign, with the Romney camp pushing increased use of carbon fuels and the Obama team supporting greater use of renewables, may supply a starting point. Investing in alternative energy supplies is not only about jobs. It is also about the long-term costs of global warming, preserving a future for ranchers and farmers, preventing higher grocery prices and water rationing, minimizing the costs for re-engineering our coastal cities in the face of rising oceans and curbing the growing expenditures for rebuilding after weather emergencies.

In the film “The Body Snatcher” (1945), with Boris Karloff and Bela Lugosi, a 19th-century doctor collects bodies for his scientific experiments. The recent four-part award-winning report “Skin and Bone: The Shadowy Trade in Human Body Parts,” published by the Inter-national Consortium of Investigative Journalists in a variety of media, documents a horror worse than the film’s.

The humane practice of donating one’s organs for transplantation is admirable. Less admirable is what sometimes happens to the rest of the body without the donor family’s consent. Delivered to the mortician but then passed on to unscrupulous operatives, the corpse is dismembered and skinned, and the tissue is processed and sold by “corpse wranglers” on a market that involves over 2,500 companies.

In one case Michael Mastromarino, a dental surgeon in Brooklyn, N.Y., who owns a tissue recovery firm in New Jersey, received the corpse of a suicide, whose skin, bones and other parts were used to manufacture medical products. He lied about the manner of death and falsely claimed to have the family’s permission. He has stolen skin, bones and other body parts from grandmothers, factory workers and the notoriously despoiled body of Alistair Cooke. His business was registered on Nasdaq.

The trade in body parts is an out-of-control multimillion dollar industry. It deceives the original donors, who wished to give, not sell their bodies and commodifies the human corpse. New York’s Senator Charles Schumer proposed a law that new tissue banks meet minimum standards and undergo inspection by the Federal Drug Administration. The funeral home and tissue vendor industries killed the bill.

For years the baby boomer generation, those born between 1946 and 1964, has purchased more books than other generations. That is hardly surprising in light of its size, currently 75 million. The boomers’ lead in book buying has now been surpassed, according to the 2012 U.S. Book Consumer Demographics and Buying Behaviors Annual Review, a volume that book publishers consult to find out who buys what, where and for what reasons. (Confession: We have not bought a copy, which sells for $799, and cannot provide detailed figures.) But Publishers Weekly, a co-publisher, has broadcast this tidbit: Generation Y, those born between 1979 and 1989, outspent the baby boomers, who are mostly their parents, in 2011. GenY also surpassed the boomers in size, with a current population of 80 million. Their share of U.S. book purchases in 2011 rose to 30 percent. The boomers, by contrast, bought just a quarter of all books sold in 2011.

Online sales are also increasing, with 43 percent of GenY purchases made online. Whether buyers are seeking new or used books, self-published or traditionally published books, paper or e-books, they increasingly turn to online markets. That could bode ill for the future of real, not virtual bookstores, and it may reduce or markedly change the culture of browsing and socializing over books. Book buying is not the same as book reading, of course, since books are borrowed as well as purchased. The saddest number in the report is this: 51 percent of U.S. consumers neither buy nor borrow books.

Show Comments (
4
)
Comments are automatically closed two weeks after an article's initial publication. See our comments policy for more.
Stanley Kopacz
7 years 8 months ago
That human-induced climate change is still considered a topic for debate shows what a ship of fools this country's become.  The problem is, the science gets complex fast, which makes it less understandable to the public and vulnerable to propagandist liars.  Most people don't even know how their cars work, let alone how they're destroying the climate.
7 years 8 months ago

The growing season of 2010 into the  Fall, produced an abundant crop of large, luscious looking acorns, followed by a severe Winter that deposited   five feet of snow in NYC, larger amounts north and west of the City.

The growing season of 2011 into the   Fall, produced a meager crop of acorns, very small in size, followed by an unusually mild winter. A snowfall towards the end   of   October   gave the  false impression that we were in for a whopper of a winter, but in reality only a few inches of snow accumulated all season long and  some plant-life  even flowered  in February.

The growing season of 2012 is coming to an end and this year the acorns, like the previous year are small and of depleted quantity. Does this mean that we’re in for a mild winter like 2011?   Or, do the size and quantity of acorns mean nothing at all winter-wise?

I personally believe that natural predictive signs of the type of weather, or climate change to expect,  abound throughout creation. Like the size and quantity of acorns predictive of the kind of winter in store in a given year. Jesus too, pointed to natural predictive weather related  signs  and climate change indicators,  talking about “red sky” and “wind direction” signaling meteorlogical   variables.  As son of the Creator and also having a hand in it himself, Jesus certainly is a trustworthy observer!

So, what am I trying to say? I’m trying to say that Global Warming is not a disaster, but simply an intrinsically natural happening, having somewhat cyclical characteristics, allowing “unnaturally natural” weather patterns among other nanifestations to develope. Many others think the same way, including a sizeable number of reputable scientists, who do not talk loud enough. As always “he who talks loudest gets heard!” Thus, the “other side” gets heard and their voices are prevailing.

Is humanity a part of the problem? Considering that we add nothing to the atmosphere that is not already there, the answer is “No.” Maybe the earth is warming from the inside out by natural causes, not the other way around? To this  add forest fires, fires in general, increasing  volcanic eruptions, saline evaporations from oceans and seas and “Yes” to a degree, the  excessive  burning of fossil fuels, which releases into the atmosphere material not new  to the earth, but in greed-oriented amounts, and  have  some kind of damaging environmental effect.

If the latter is true,  then Global Warming is not just  an ecological problem but a moral one too! Does the Gospel contain the “good news” about the health of the earth that we should want to hear? St. Augustine said, “The Bible doesn’t tell you how the heavens go” that is, it is not a scientific textbook, but rather “how to go to heaven,” namely the Bible is a moral guide.

Well, might it be that the Bible (the New Testament) does tell us how the “heavens go” by providing moral insights on how to avoid the Capital Sin of Greed, thus helping to remove Global Warming as a man-made environmental threat, at least to some degree, assuming that WE are truly at fault. A ponderous thought pleading for additional ponderous thinking.
7 years 8 months ago
Just a note to Bruce Snowden:

"The intention of the Holy Spirit is to teach us how to go to heaven, and not to teach us how the heavens go."
--Galileo Galilei (1564-1642), in a letter to Cristina of Lorena,
grand duchess of Tuscany
7 years 8 months ago
# 3 Dear Larry,   Is it possible that G.G. borrowed from Augustine "fixing it up" to suite his purpose. If G.G. is the original source, then I've been giving Augustine credit for something he didn't say, for years. I'm assuming you're right, for which I say THANKS!
Advertisement

This article also appeared in print, under the headline “Current Comment,” in the September 10, 2012, issue.