'Balkanization' of the Congo Protested

'Balkanization' of the Congo Protested 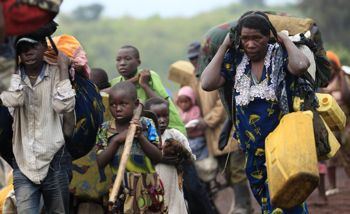 Congolese bishops urged Catholics to join countrywide demonstrations on Aug. 1 to protest again a "balkanization plan" that they say is dividing the country along ethnic and geographic lines. Father Leonard Santedi, conference general secretary, announced in a July 21 statement that the Catholic Church planned prayers for peace beginning on July 31 and invited the faithful to donate money and supplies to citizens suffering because of rebel incursions in the eastern part of the country. The rebel movement, known as M23, is made up of ethnic Tutsis and has fought the Congolese army in North Kivu and South Kivu departments. The fighting has displaced more than 260,000 people, according to the United Nations World Food Program. "Aug. 1, a holiday in Congo, is the feast of our parents and our ancestors who left us the heritage of this land," Father Santedi said. "We have only one land, and we must protect her. So, we will march to say no to the balkanization of the country." The priest also pointed to a July 6 statement from the bishops, who expressed concern that a plan to divide the country already was being executed. "On the economic front, by the presence of illegal networks for the exploitation of natural resources, and on the political front, by an intensification of an unacceptable presence of militias and foreign armed groups who kill, rape and loot, causing the forced displacement of the Congolese population and an irregular occupation of our territory," he said. The bishops have consistently affirmed the importance of protecting the Congolese borders as established when the country became independent in 1960. Since achieving independence, several provinces have attempted to secede with the backing of neighboring countries and other governments around the world with an eye to accessing the country's mineral wealth. The Kivu departments are rich in minerals including tungsten, tin and coltan, a metallic ore. Many mines which produce minerals used in the production of cell phones, laptop computers and state-of-the-art medical equipment are controlled by armed groups backed by neighboring countries. Rwanda has been singled out by a United Nations panel for supporting the latest armed insurgency by the M23 group. The gravity of the accusations were underlined when the United States, usually a staunch ally of Rwanda, froze $200,000 in military aid to the country July 21 because of its support for the rebels. Father Santedi also announced that the Congolese church intended to work internationally to preserve peace and Congo's borders. "We know that the challenges that we face for a unified and peaceful Congo are real, serious and many. It will not be easy," Father Santedi said. "It is time for awareness that we must choose hope over fear, unity over conflicts, time to defend the integrality of our territory. These are the actions that the church proposes, in this choice to act for a unified and prosperous Congo," the priest's statement said.

This article also appeared in print, under the headline “'Balkanization' of the Congo Protested,” in the July 30, 2012, issue.