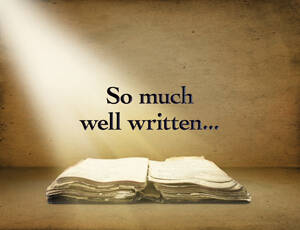 God’s plenty—that is how lovers of English literature have referred to “The Canterbury Tales,” by Geoffrey Chaucer. And that is the sense I have this year from the heavy flow of entries to the Foley poetry contest. Often one would strike me with its poignancy or its sharp observation, and I would put the poem aside, regretting that I could not tell the writer in person, “Nice going.” Often, too, my judgment would be: “This poem’s complete. It does its job—not a world-beater perhaps, but admirable.”

For meritorious phrasing, consider the following. An elderly sister (Lois Houlihan, F.M.M.) says back to the Lord, “This is my body given for you.” Brenda McLaughlin reminds us “a centurion’s spear cut between God’s ribs.” Raymonde Motil observes ruefully, “When I become queen of the world,/ I will have much work to do.” Conchita Ryan Collins illustrates “the familiar hush” of snowfall by the quietness when straw was strewn on the streets around the house of the dying Giuseppe Verdi. Dorothy LaMantia says in “Desert Wisdom,” “Teach us, O Saguaro,” as you “sip water welled in secret.” William O’Leary says of modern poetry, “So much well written,/ so few well read.”

“Mortality touches the mind,” said Virgil long ago, Mentem mortalia tangunt. It certainly does amid these poems, many of them by caregivers. In “A Short Visit,” Kenneth Feltges records with gratitude the sudden clarity of an Alzheimer’s patient just before dying. The Rev. Joseph Oblinger of Bozeman, Mont., in his 65th year of ministry, composes a poetic obituary for a parishioner. Patricia O’Neill Hoying says to someone unidentified: “Fare thee well/ on thy journey/ past the flesh./ All are bending that way/ though not beckoned yet.”

Florence Bruce admits, “Growing up, I often wondered/ what my young mother’s reaction was/ when she discovered herself suddenly dead.” “I hear her screaming, ‘No! No! No!’/ still motivated by earth’s business.” Mortality touches me also in the recent death of the Oregonian poet, Leonard John Cirino, a fruitful contributor to America. With his Pygmy Forest Press, Cirino was an encourager, one of those heroes of modern poetry.

Jennifer Homan, by contrast, gives us a lift in “I Love the Spoons,” a catalogue of their variety. Anne Harman surprises as much by her photographs as by the poem “Hummingbird,” which they accompany. Esthel Na, a “freshwoman at Immaculate Heart High School,” in Los Angeles, prays that “those who can’t fathom happiness,” at least “not yet,” will eventually do so. Her poem is called “Someday.”

Poems arrived from overseas, as usual—from Macau, Greece, India, Kenya, along with England and Ireland. Arpad Fekete writes from Kiskunfelegy-haza in Hungary. From Croatia Walter William Sofar sends in a paean to the United States. At least somewhere we are appreciated! The contest heard from 25 religious brothers and priests, and a record 50 religious sisters, plus a half dozen prison inmates, always welcome.

Our winner this year is Gary J. Boelhower, for his poem “Jacob’s Ladder,” printed here, for which we warmly congratulate him. We also laud the runners-up: first of all, Susan Bucci Mockler for “The Wedding Suit”; then Elizabeh Claverie for “Waiting for the Father”; and finally Gerald McCarthy for “Praise Song for My Father.” These fine poems will appear soon in America. 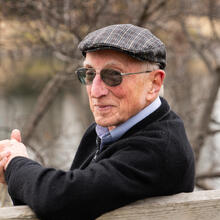 Show Comments (
1
)
Comments are automatically closed two weeks after an article's initial publication. See our comments policy for more.
Michael Saso
9 years 6 months ago
Wonderful article of Fr Jim Torrens, SJ. Praising all poets, is itself an inspiration. May we suggest that "Art is itself a sacred encounter", whether the art is in words, colors, dance, or no-word communication. Look forward to reading all the other poems as well.