Skip to main content
Signs Of the TimesMarch 26, 2012 issue 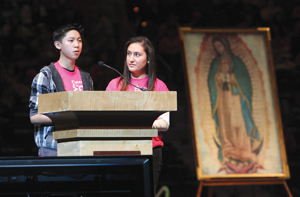 The adult face of the Catholic Church in the United States has changed markedly over the last 25 years. Demographic data show the U.S. church is younger and more ethnically diverse, though increasingly Latino. “That the Catholic Church crosses all lines of gender, race, social class and generation is a gift, a strength,” said Mary Johnson, a Sister of Notre Dame de Namur and professor of sociology and religious studies at Emmanuel College in Boston.

“Do church organizations reflect these demographic changes?” Sister Johnson asked during her keynote address at the Catholic Common Ground Initiative’s annual Bernardin Conference, titled “Ecclesial Communion in Light of Generational Diversity.” Sister Johnson was speaking to an ethnically diverse mix of student leaders, professors, theologians and other professionals, mostly under age 50, an audience that indeed reflected some of these changes. The event was held this year on March 2 to 4 at Mundelein Seminary near Chicago.

Reviewing the data, Sister Johnson suggested that within the church there remain fertile possibilities for cross-generational ministry, prayer, service and decision-making. She also said that the geographical migration of some Catholics away from the Northeast and upper Midwest to the South and West explains why parishes and schools are being closed and merged in the former areas and newly built in the latter two regions. That migration also contributes to “regional differences in optimism and despair,” said Sister Johnson.

Some conference attendees noted that structures to foster the cross-generational church are not yet in place and worried that the generations do not have enough opportunities to get to know each other. Younger members expressed a yearning to be mentored and “to share the podium” of leadership, rather than being relegated merely to youth activities.

Dylan Corbett, a millennial who works for the U.S. bishops’ Campaign for Human Development, spoke of the young being threatened by a “consumerist” understanding of communion. “We see the church as a product or service that we can select to ‘purchase,’ use and discard at will,” he said.

Members of the post-Vatican II cohort spoke of a “middle child” syndrome. “There is a lot of attention given to the millennials for their new energy and needs,” said Kevin Ahern, a doctoral candidate in theological ethics at Boston College. “There is also still a lot of attention on the Vatican II generation, who lead the church now. But what about those of us in between?”

Members of the pre-Vatican II group wanted to know from the others: What is your dream for the church? What are you willing to do to see it through, and how can we help? That offer appeared to draw the generations in the room closer together. “The energy of the young, together with the wisdom of the older leaders, could really vitalize a lot of our exhausted church leaders and programs,” said Dee Bernhardt, a pastoral associate and director of campus ministry for St. Augustine University Parish in Platteville, Wis.

View video interviews with attendees of the Common Ground conference.