The French Connection: The Academy Award winning 'The Artist' 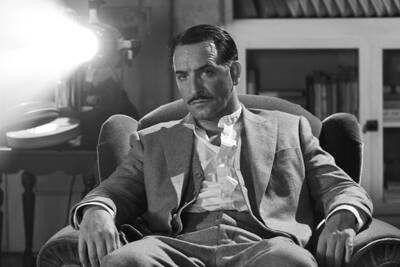 Silent movies came to an end in the 1920s. As talkies took over, a whole generation of celebrated actors were culled from the studios and tossed aside. The Wall Street crash of 1929 emptied their bank accounts and humbled their souls. The early days of Hollywood did not prepare them for the harsh reality of the American Dream. Success, they discovered, does not necessarily lead to grace.

It takes a French director, Michel Hazanavicius, and a French cast to bring this cautionary tale to life in The Artist. Despite the old-fashioned format—the film is almost entirely silent, leaving the viewers to read facial expressions and intertitles—it has received three Golden Globes and five Academy Awards, including Best Actor for Jean Dujardin, the new star du jour.

Like most silent films, music is a seminal part of this cinematographic experience. So is a palpable sense of theatricality, as the movie starts with a film-within-a-film in which George Valentin, a successful actor played by Dujardin, attends a screening of his latest movie. Outside the theater, he meets Peppy Miller (Berenice Bejo), a young woman who accidentally trips over him while asking for an autograph. Shortly after they are photographed together on the front page of Variety, she decides to audition as an extra in his next movie, and they start a dreamy, if desultory, flirtation. Eventually, Peppy becomes a movie star in talkies as George’s career as a silent actor comes to an end. Still, their romantic bond grows stronger despite the ebb and flow of their careers. A spectacle of French sentimentality, the film upholds the glory of romance over petty careerist ambition. It is at once a confrontation and an assimilation of French and American values.

The director takes us into the rosy neighborhood of Beverly Hills where the two main characters live, surrounded by rustling palm trees and grandiose mansions. Still, it is not financial success that matters, but the artist’s introspective bent, which aims for grace in a town ruled by wolves. “The Artist” is the epitome of a tragi-comedy, with the sound of music moving George and Peppy’s love forward, leaving Hollywood’s money-obsessed wolves to recede from memory.

As his career comes to a close and he slowly loses all of his belongings, George toys with the idea of suicide, not once but three times. He takes to drinking and is saved by his butler, though their companionship is not sufficient to see him through his next tragic endeavors. After he burns most of his films and nearly dies in a fire, he is rescued by Peppy. This happens again as he returns to his old house and puts a loaded gun into his mouth. To be sure, the image of a struggling, suicidal artist is something of a cliché. Yet Peppy is always there to remind us of the importance of maternal grace to assuage the fears of a man alone—a surprisingly conservative perspective, miles away from the celebration of devil-may-care male individualism usually embraced by Hollywood.

Still, not an ounce of judgment is passed on George's marital status, which is treated as a nagging footnote easily dismissed. True, the flirtation between George and Peppy remains innocent enough—there are no scenes depicting bedroom activities—and George’s wife abandons him as soon as his career founders. But Peppy’s dazzling performance glorifies the allure of the femme fatale. Through the course of her meteoric rise to stardom, she is portrayed as the paragon of a seductive flapper, a loose woman emblematic of the roaring twenties, coiffed and dressed accordingly, laughing loudly and dancing in public. As for George, he starts off as an impeccably dressed lady's man, sporting a mustache reminiscent of the era and wooing Peppy by fooling around with his small dog. Yet he ends up having to sell his smart suits and rely on her entirely, turning into a hopeless victim. He is a grown man who behaves like a child, albeit one who manages to win us over with his slapstick humor and swashbuckling demeanor.

Beyond the idyllic Californian setting, the actors evince starkly French characteristics. At times, this makes for an unconvincing movie. This is especially true of Bejo, whose on-screen name leads us to believe she is playing an American actress. The way she holds her arms and in her facial expressions, details unusually magnified by the format of the silent movie, would be better off on the terrace of a Parisian cafe than on a movie set in Burbank.

This may explain why Jean Dujardin's performance is remarkable in comparison. If we are to believe the few words he pronounces in the last scene, then he is playing a French actor living in California. Thus, the actor is in synch with the storyline. In the end, his charms carry the film, while Bejo makes it look like a parody of an old silent movie. “The Artist” is an appealing tale, made more so by its unlikely journey to the Academy Awards. Director Michel Hazanavicius intended the film for a French audience, and it was only picked up by Hollywood maven Harvey Weinstein late in the process. Not bad for a nostalgic piece of cinema.

Victor Stepien is a writer based in England. He is writing his first novel, My Southern Purgatory.

Great review! I was skeptical about seeing a silent movie, but after the Oscars I decided to see it anyway. It wasn't as bad as I expected. I agree with Mr Stepien that Dujardin was very good.