Skip to main content
Signs Of the TimesFebruary 13, 2012 issue 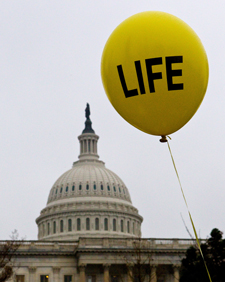 A poll sponsored by the Knights of Columbus indicates that a majority of Americans continue to support restrictions on abortion. Seventy-nine percent said they would not allow abortion after the first trimester, and 51 percent said they would allow abortion only in cases of rape, incest or to save the mother’s life—or not at all. The survey responses were released in Washington on Jan. 23, the date of the 2012 March for Life. Almost four decades after Supreme Court decisions “resulted in the almost totally unrestricted abortion regime of today, these decisions continue to be out of step with the vast majority of Americans,” said Supreme Knight Carl Anderson. “Far from being settled law, the inadequacy of the court’s reasoning on abortion...is readily apparent to most Americans. Once a survey moves beyond the labels of pro-life and pro-choice, we see a fundamental unity among Americans in favor of significant abortion restrictions.”