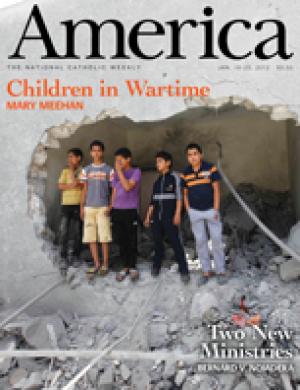 Good Returns: Can you follow your conscience and still beat the S&P 500?
Thomas J. HealeyJanuary 16, 2012

Can you follow your conscience and still beat the S&P 500?

'What has happened to you, Josh?' A fictional letter to a bishop.

Beware ‘Pastores Dabo Vobis’ Contrary to what Katarina Schuth, O.S.F., reports in “A Change in Formation” (1/2), there is no evidence to suggest that levels of sexual abuse by members of the Catholic clergy concentrated after 1960. Anecdotal evidence abounds of abuse and cove

Editorials
The Way of Life
The EditorsJanuary 16, 2012

Rethinking the goals and methods of the pro-life movement