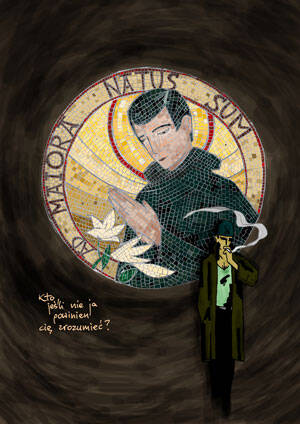 Can comic books and graphic novels tell religious stories in ways that reach young people without diluting the subject? A young Jesuit artist in Krakow, Poland, thinks so. Przemyslaw Wysoglad, S.J., known as Przemo, has combined rich color, clever images and deep reflection in producing his comic paperback Kostka, the story of St. Stanislaus Kostka. The saint, born to an aristocratic Polish family in 1550, attended the Jesuit school in Vienna along with his older brother, Pawel. Despite bullying by the worldly Pawel, Stanislaus kept the intense religious leanings he had had since childhood. He even had a vision of the Virgin Mary telling him to become a Jesuit, a vocation he pursued with heroic, holy zeal. Knowing his father would object, he fled to Germany, then to Rome, walking almost 1,000 miles. He became a Jesuit novice, but within a year he fell sick and died on Aug. 15, 1568. He was just 17.

Przemo recently spoke with me about his project. “In 2008 we were preparing Ignatian youth days at our novitiate, and the main topic was the life of Stanislaus Kostka,” he began. “It wasn’t my idea to make a comic book; that came from my novitiate friends. I started to think about the comic but didn’t get it done before these Ignatian days, only afterward. At first it was very short, eight pages, but my novice master gave me the mission to make a whole book about Stanislaus.”

Przemo was born to an artistic family in Wadowice, the hometown of John Paul II. “My whole family is connected with art,” he said. “My mother works as an artist; my father was a photographer. Many people from my family studied art. I grew up among artists, and so it was not hard for me to be interested in art.

“I’ve never studied art, only art history. Everything I learned I learned by myself. Of course, my mom and other members of my family showed me things. I like Art Nouveau (Secession style) and Art Deco, mostly because in this period art had a wide range of forms, mostly in design. My favorite artists are Gustav Klimt and Stanislaw Wyspianski [Am. 10/17/11]. I also like the comic book artist Mike Mignola (author of “Hellboy”); he inspires me most.” As for the comic book form, Przemo says, “I’ve always been interested in telling stories rather than just making pictures, so for me the comic book is the best way to combine telling the story and making pictures.” He went from Hellboy to a saint.

In “Kostka,”Przemo projects modern images and allusions back into scenes from the 1500s: the boys travel to Vienna by train; they go to a disco; the novices have computers; Stanislaus’s brother, Pawel is rarely without a cigarette. Hints of Elvis, Batman and pop music appear against 16th-century backgrounds. Readers have had various reactions. “At the beginning they were rather skeptical about putting Stanislaus in modern society,” says Przemo. “But after reading this book they said…it was a good idea, because I showed them that in the 16th century youngsters had the same problems as today. That was my main idea.”

How did Przemo come to admire the saint? “In the beginning of my novitiate time, pious Stanislaus with his rosy cheeks was very funny for me, but after a year I realized that he was a normal guy, like me and my friends.” And Przemo particularly likes his portrait of Stanislaus (p. 23, left): “It is very similar to a painting in our novitiate, and I prayed before this painting each day for almost two years. It’s very close to me, and I am very proud of it.”

His art connects to tradition. “This is for me a kind of prayer—you know, like orthodox icon painters or, even more, medieval scribes, as in The Name of the Rose. This is the best thing I can do, and I want to praise the Lord with that. And of course I want to make things that will lead people to God.”

Przemo came to know Jesuits through art history, and he sees art as part of his vocation. “I want as a Jesuit to make comic books—in the future maybe about Francis Xavier, Ignatius Loyola, etc.—and illustrations for books. I also want to work with artists, maybe retreats and formation for them. Right now I’m leading workshops about sacred art for children age 7 to 13: stained glass, icons, mosaics, etc.”

Przemo had some trouble getting the book published because the color requirements were greater than typical comic book art and printing costs would be higher. But the print run of 1,000 copies, published by the Jesuit publisher WAM in Krakow, quickly sold out. He has further plans. “Next year in Poland is the year of Peter Skarga, a famous Jesuit preacher at the royal court. Father Rector [the Jesuit superior] has missioned me to make a comic book about him.”

It will be fascinating to see how Przemo goes from telling the story of a lively teenage saint to that of a court preacher. No doubt he will make the move with grace.

View a video introduction to the comic book art of Przemyslaw Wysoglad, S.J.

Edward W. Schmidt, S.J., is an associate editor of America.

Way kewl! I hope he's getting some backing/funding for an English translation. Loyola Press???