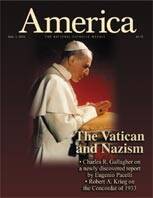 Recently The New York Times writer Peter Steinfels offered a considered examination of the dynamic tension between Pope John Paul II’s moral leadership during Operation Iraqi Freedom and the exercise of papal diplomacy. Morally and religiously, the pope could make sweeping public claims for peace while maintaining diplomatic relations with both belligerents as they prepared for battle.

“Rather than focusing largely on shaping the views of Catholics and their morally concerned fellow citizens,” Steinfels astutely wrote, the Vatican’s diplomatic apparatus “focuses more on addressing governments, usually behind closed doors.”

The practice of popes making peace through diplomacy perhaps reached its peak under Pope Pius XII, a career diplomat. As a man of his times, he witnessed the decline of the so-called old-world, or 19th-century, style of diplomacy and the emergence of modern diplomatic practice. For diplomats trained in 19th-century procedure, secrecy in negotiations was paramount, finalized treaties were inviolable, and rules of formality reigned supreme. In cases of import, governments and their heads of state were addressed almost exclusively behind closed doors.

By the end of World War II, an entirely new style of diplomacy materialized. It was exemplified by open conferences, lengthy debates grounded in the ideals of democracy and deep attention to personal relationships among leaders. In an astounding transformation, the success of negotiations was measured less by contractual substance and more by the “spirit” generated at the conference. Diplomats began to call one another by their first names.

It is somewhat symbolic that Eugenio Pacelli, who would later become the Vatican’s cardinal secretary of state and Pope Pius XII, received his diplomatic training during the years 1899 to 1901. His training in statecraft combined elements of both the old and the new diplomacy. One might say, in fact, that he struggled to understand and implement the two. As historians are finding out, for all his open diplomatic and political declarations there were also private and secret discussions.

For example, the recent discovery at Harvard University of a report filed in 1939 with the U.S. State Department offers a professional diplomat’s estimation of then Cardinal Pacelli’s anti-Nazi credentials. In this report of a 1937 three-hour meeting in Berlin “to discuss the situation in Germany” with Alfred W. Klieforth, the former U.S. consul general, Pacelli’s views are described: “He opposed unilaterally every compromise with National Socialism. He regarded Hitler not only as an untrustworthy scoundrel but as a fundamentally wicked person. He did not believe Hitler capable of moderation, in spite of appearances, and he fully supported the German bishops in their anti-Nazi stand.”

Although he protested the Nazi regime a number of times, these words may rank as the harshest anti-Nazi and anti-Hitlerian statements attributed to Cardinal Pacelli during his tenure as the Vatican’s secretary of state.

The report offers an extraordinary moral condemnation of Adolph Hitler. But it also shows that Pacelli preferred to make such remarks in private, only to high-ranking diplomats and within the context of formal discussion. Like many other diplomats of his time, he was not yet able to break completely from the old rules of diplomatic conduct.

From 1938 to 1940, Joseph P. Kennedy served as the U.S. Ambassador to Great Britain. In April of 1938, then Cardinal Pacelli met with Ambassador Kennedy in Rome and handed him a lengthy report on Nazism, which expressed his own “personal views, delivered for your confidential use.” Pacelli also gave Kennedy permission to pass “these personal private views of mine on to your Friend”—a cryptic yet clear allusion to President Franklin D. Roosevelt.

In his report, Pacelli made clear that the Nazi program struck at the “fundamental principle of the freedom of the practice of religion,” and indicated the emergence of a new Nazi Kulturkampf against the church. Sounding beleaguered and perhaps a bit frightened, Pacelli expressed the view that the church “at times felt powerless and isolated in its daily struggle against all sorts of political excesses from the Bolsheviks to the new pagans arising among the young ‘Aryan’ generations.” Nevertheless, he assured Kennedy that any political compromise with the Nazi regime was “out of the question.”

Essentially a Vatican policy paper and private blast at Nazi “pro-paganism,” the Pacelli report has been out of sight for 65 years. Until the opening of the Kennedy files, the document had been viewed only by three people—Ambassador Kennedy, President Franklin D. Roosevelt and British Prime Minister Neville Chamberlain. In terms of the old style of diplomacy, those were the statesmen who should have been apprized of such information.

At times, Pacelli’s employment of old and new diplomatic tactics seemed to conflict. In March 1939, for instance, Pacelli wrote to Hitler in response to a telegram of congratulations from the Führer, on the occasion of Pacelli’s elevation to the papal throne. Using open diplomacy and writing with standard statesmanlike largesse, Pius’s flowery prose gave to author John Cornwell the impression, as he relates in his best-selling book Hitler’s Pope, that Pius was genuinely affirming Hitler and his regime. But the recently discovered Pacelli report suggests that nearly a year before he became pope, and well before he wrote to Hitler, Pacelli employed private diplomacy to make clear to the Allied leadership his intense disdain of the Nazis.

The day after his coronation, Pius held a series of meetings with Kennedy, the contents of which have remained secret. After those meetings, Kennedy wrote to his superiors at the U.S. Department of State indicating that the new pope held a “subconscious prejudice that has arisen from his belief that Nazism and Fascism are pro-pagan, and as pro-pagan, they strike at the roots of religion.” Since Italy was only weeks away from signing its so-called Pact of Steel with Nazi Germany, both Kennedy and the new pope deemed it prudent to keep such sentiments out of the public sphere.

“Long ago,” U.S. Ambassador William Macomber wrote, “it was believed that the first diplomats were angels.” Their task, the ancients believed, was to carry messages between heaven and earth. To glance at some of the recent literature about Pope Pius XII, one might assume that Eugenio Pacelli was far from an angel. Because of his alleged silence amid Nazi atrocities and the Holocaust, Pius has been accused of being morally ineffective, religiously weak and even anti-Semitic. While no pope possesses the purity of the angels, it is clear that at least diplomatically, during World War II Pope Pius XII engaged in an excruciating tussle between employing the secrecy of 19th-century practice with the principles of open dialogue and public discussion of the 20th.

Joseph Kennedy’s final meeting with Pope Pius XII took place six months before the outbreak of World War II. Pius indicated that he was greatly disturbed by the “trend of the times.” Nonetheless, Kennedy urged the pope to seek peace one more time, to enter into negotiations with the Reich, be they public or private, by the old rules or the new. The pope’s final remark certainly can be taken as a description of the man himself. “The church can only do so much,” he said, “but what it can do, it will.”

Charles R. Gallagher, S.J., who received his Ph.D. in American Catholic history from Marquette University, is now studying philosophy at St. Louis University in preparation for ordination. He is also writing a biography of the Vatican

On the other hand, the Cardinal Secretary of State was known to have been outspoken about the Nazis on a number of occasions before he passed on his “personal private views” to Kennedy in April of 1938. Three years previously, on April 28, 1935, Pacelli had publicly criticized the Nazis while addressing 250,000 pilgrims at Lourdes in France, as reported the following day in The New York Times. And a year before his meeting with Kennedy, there was Cardinal Pacelli’s role in the composition of the blistering encyclical, Mit Brennender Sorge, issued against the Nazis by Pope Pius XI on March 14, 1937.

Pacelli, then, came to the papacy as a seasoned diplomat with broad experience in dealing with the Nazis. As pope, his contacts with key opponents of the Nazis in Germany continued. One was Theodor Groppe (1882-1973), a Catholic and a lieutenant general on the German general staff, who had been dismissed from active duty because he had opposed the Nazi propaganda against the Catholic Church. Groppe had warned Pius XII early in his pontificate that Hitler had said, “I will crush Christianity under my heel as I would a toad.” Known as the “Black General,” Groppe survived the war even though he had been placed under the sentence of death; he lived to see his son, Lothar (b. 1927), ordained a Jesuit priest.

Although it took the horror of a world war to change Kennedy’s views about the Nazi leader, Pacelli was very perceptive and prophetic in his analysis of what the Catholic Church and humanity faced in Adolf Hitler. Perhaps that was one of the reasons why Franklin D. Roosevelt, who had read the document recently recovered by the young Jesuit historian, admired Pacelli (later Eleanor Roosevelt had reservations about the pope being too lenient with the Nazis) and sought to silence Kennedy as the president faced the challenge of a world at war on the eve of the 1940 election.