Art as Mission: The enamel work of Egino Weinert

Art as Mission: The enamel work of Egino Weinert 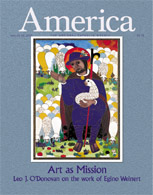 You can see a wonderful golden tabernacle and monstrance by Egino Weinert in the Gaukirche of Paderborn in Germany. You can pray his Stations of the Cross in the parish church of Strassen in Luxembourg or at St. Vincent de Paul’s in Huntington Beach, Calif. You can admire his decorations at a college in Portugal or a chapel in Cairo. There are many examples of his work scattered throughout Scandinavia. But you can also get a very good sense of his style and spirituality by visiting The Cloisters, the medieval division of New York’s Metropolitan Museum of Art. The Treasury there boasts the central plaque of a late 12th-century Limoges cross in champlevé enamel and copper gilt. Against a brilliant blue, green and golden background, the chalk-white torso of the crucified Christ and his startlingly rose-colored face display a matchless serenity. The bold color, simplified forms and emotional immediacy are entirely in the key of an artist who now, in his 83rd year, has crafted nothing more proudly than crosses.

Born on March 3, 1920, in Berlin to devout Catholic parents as the eldest of five children, the young Günter Przybylski had the good fortune to hear Romano Guardini preach and to see exhibitions of paintings by German Expressionists like Emil Nolde and Max Pechstein. While preparing to receive first Communion he was greatly attracted to the priesthood but then decided, in 1934, to enter the Benedictine abbey at Münsterschwarzach in Franconia. There he received the name Egino, and some years later his father changed the family name to Weinert. Egino’s dream, to be at once a painter and a missionary, yielded to a young monk’s service in the community, but he was gradually allowed to apprentice in sacred painting, and he passed his goldsmith’s examination with distinction in 1941.

Jailed for refusing to say “Heil Hitler,” Weinert was later drafted into military service and took every opportunity that presented itself during the difficult war years to work with other artists. While visiting his parents in Berlin in 1945, he lost his entire right hand when an electrical fuse proved to have explosives hidden in it. Undeterred, he taught himself to write and paint with his left hand and, having returned after the war to the monastery, was finally sent to attend art school in Cologne. In 1949 he was refused final vows, left the monastery and found himself, bitter but still believing, alone in the world.

But in 1951 he married Anneliese Leopold, who was to be the mother of his four children. Eventually he settled in Cologne in the Marzellenstrasse, not far from the cathedral, and built a house and studio where he remains to this day.

Commissions and honors gradually increased for the struggling artist. Early on he was helped by the great popularity of the small crosses he made for children receiving Communion. (He estimates that he has done designs for more than 300 larger crosses.) His enamel designs proved to reproduce beautifully on cards and calendars. He delighted in crafting chalices for young priests and became popular with American visitors to his shop. Pope Paul VI admired a cup-shaped chalice that Egino told him the cathedral chapter in Cologne had considered unacceptable—but that the pope declared blessed through his own use. In 1985, with his second wife, Waltraud, whom he had married after the death of Anneliese, he attended the consecration of the chapel of the Pontifical Academy of Sacred Music in Rome, which he had decorated and which Pope John Paul II said was among the most beautiful he had ever consecrated.

The continuity of Egino Weinert’s work, artistically and religiously, is remarkable. His simplified, sinuous forms recall Ernst Barlach and seem of themselves to demand the bold colors, dramatic and yet tender, of his unblended palette. His unerring sense of scale, indebted to medieval stained glass and Netherlandish primitives, enables him clearly to distinguish principal figures and onlookers in settings that are detailed but never crowded. He has a miniaturist’s sense of intimacy and yet the elemental feeling of Georges Rouault, whom he has long admired. Perhaps the lovely miracle of his art has been possible because it has indeed been his mission. “I want to see the whole Bible with the eyes of our time and let it become plastic,” he says. “For me Christ is not an otherworldly figure floating over humanity in a long robe. He is in our midst as a simple farmhand or a cabinet-maker”—or as a good shepherd, as were generations of Egino Weinert’s ancestors.

This article also appeared in print, under the headline “Art as Mission,” in the June 23, 2003, issue. 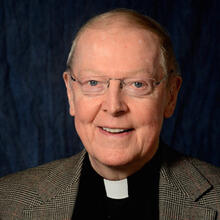 Leo J. O’Donovan, S.J., is president emeritus of Georgetown University, Washington, D.C. The artwork on these pages is available at www.creatormundi.com.