The Potential of a Plenary Council

The Potential of a Plenary Council 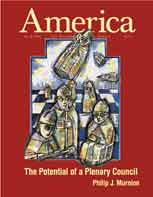 Eight bishops recently sent a proposal to the administrative committee of the U.S. Conference of Catholic Bishops for the convening of a plenary council of the bishops of the United States. Coincidentally, the editors of Church magazine, of whom I am one, circulated an editorial also calling for a plenary council. The two proposals were quite different. The first, enjoying some authority, rather narrowly focused on firming up the discipline of celibacy and the virtue of chastity. The latter, simply an editorial opinion, was directed toward what the editors see as a broader set of issues. Both derive, however, from the current crisis surrounding clergy sexual abuse. Partly because of the agenda proposed and partly because the United States has not seen a plenary council since 1884, many Catholics—bishops included—have been puzzled by the proposal. Many others prefer to support independent forums like those sponsored by Voice of the Faithful and many colleges and universities.

The council idea deserves consideration. It may be the best way to achieve some of the effect felt on the first morning of the bishops’ meeting in Dallas. The assembled bishops heard their president, Bishop Wilton Gregory, speak with extraordinary candor about the bishops’ own responsibility for the crisis, followed by sharp commentaries on the erosion of Catholic trust in episcopal leadership, poignant accounts of abuse by victims and a harrowing lesson by a psychotherapist on the effects of abuse on victims. The voices of the faithful, the voices of the vulnerable, and the voice of expertise filled out Bishop Gregory’s case for the bishops to take decisive action. It was an unprecedented moment in the history of the Catholic Church in the United States.

It seems to me that the convening of a plenary council promises to be a similarly profound occasion for joining the same voices and the collegial authority of the bishops for strengthening the community and mission of the church. A brief history of plenary councils in the United States, the documents of the Second Vatican Council and the Code of Canon Law about a plenary council and suggestions for a council agenda may help to make the case.

After meeting seven times in provincial councils during the 19th century, the bishops of the United States, with the approval of Rome and under the chairmanship of the archbishop of Baltimore, met in plenary council for the first time in 1852. They thought it necessary to achieve unity among the dioceses in various matters of church discipline. According to the Jesuit historian Gerald Fogarty, S.J., the council mostly “reenacted for the new provinces and dioceses of the country the legislation of the previous provincial councils.” The second plenary council convened in 1866. This time the bishops were reflecting on the implications for the United States of Pius IX’s Syllabus of Errors and addressed what they saw to be local dangers in the proliferation of sects, religious indifferentism and attempts to reach souls in the afterlife. In Father Fogarty’s judgment, “while they drew more heavily than their predecessors on papal encyclicals and other pronouncements, they retained a strong sense of collegiality.” However, according to Father Fogarty, “by 1884, when the Holy See summoned the Third Plenary Council, most of the bishops had lost that spirit, and the agenda was largely set in Rome.”

The bishops did, nonetheless, decide on a number of practical initiatives of considerable pastoral importance for the American church: parochial schools, a standard catechism, the establishment of The Catholic University of America and the naming of some pastors as “irremovable rectors,” who would have the right, along with diocesan consultors, to nominate bishops for their dioceses. (This right was removed by the Holy See in 1916.) This was the last of the plenary councils.

The spirit of collegiality seems to breathe through the statement of Vatican II regarding local councils. In the “Decree on the Ministry of Bishops” (No. 36), the bishops declared:

From the very first centuries of the church, bishops, as rulers of individual churches, were deeply moved by the communion of fraternal charity and zeal for the universal mission entrusted to the Apostles. And so they pooled their abilities and their wills for the common good and for the welfare of individual churches. Thus came into being synods, provincial councils and plenary councils in which bishops established for various churches the way to be followed in teaching the truths of the faith and ordering ecclesiastical discipline.

This sacred ecumenical synod earnestly desires that the venerable institution of synods and councils flourish with fresh vigor. In such a way faith will be deepened and discipline preserved more fittingly and efficaciously in the various churches, as the needs of the times require [italics added].

Nothing grudging about that. The triennial synods and the special synods convened by John Paul II have carried forward this desire for the universal church. As defined by Paul VI, however, they are technically not exercises in collegiality, but forums for consultation for the pope, who issues the resulting document. Councils, however, have not been convened.

The codification of this “earnest desire” occurs in Canons 439-46 of the revised Code of Canon Law. Canon 439 §1 states that “a plenary council for all the particular churches [dioceses] of the same episcopal conference is to be celebrated as often as the episcopal conference, with the approval of the Apostolic See, considers it necessary or advantageous.” The conference chooses the place, date and duration, elects the president (with approval of Rome) and sets the agenda. The purpose “is to ensure that the pastoral needs of the people of God in its territory are provided for [determining] whatever seems opportune for the increase of faith, for the ordering of common pastoral action, for the direction of morality and for the preservation, introduction and defense of a common ecclesiastical discipline” (Canon 445)—a broad agenda indeed.

Participating and having deliberative votes are all the active bishops in the territory as well as those retired (when invited). Also entitled to attend are all vicars general and episcopal vicars, rectors of ecclesiastical and Catholic universities and deans of theology and canon law, a representative group of religious superiors of men and women and seminary rectors. Other clergy, religious and laity may be invited, as many as half the number of those entitled to attend. That could mean as many as 750 people. All those who are not bishops have a consultative vote. It is not deliberative, but it is a vote. Any legislation needs Vatican approval, but the council can issue statements on its own and arrange common programs. Clearly, a plenary council provides for inclusion of the voices of Christ’s faithful (that lovely canonical term), representation of the various segments of the church, the presence of people with theological expertise, the collegial authority of the bishops and the oversight responsibility of the Holy See.

An Agenda for a Council

Conservatives tend to focus on issues of personal virtue and cultural life; liberals on the structures and processes of collective action. This has been somewhat true of reactions to the current crisis in the church, though many conservatives have been as forthright as liberals in calling for greater accountability by bishops regarding a whole range of matters—pastoral, organizational and financial. The twin dangers of a situation like ours is either adopting so narrow an approach to the problems as to miss serious issues, or exploiting the situation to promote causes not directly related to the crisis. It seems to many, however, that at the very least the crisis has exposed both failures of personal fidelity among clergy (priests and bishops) and failures in the exercise of authority and leadership by priests, bishops and their staffs. It has raised concern about the conduct and effectiveness of various structures required by church law, such as diocesan finance councils.

In his charter for the new millennium, Pope John Paul II calls for a review and strengthening of the various councils called for by the Code of Canon Law. He goes on to say, “The theology and spirituality of communion encourage a fruitful dialogue between pastors and faithful: on the one hand uniting them a priori in all that is essential, and on the other leading them to pondered agreement in matters open to discussion” (Novo Millennio Ineunte).

At the same time, there is mounting evidence of the need for Catholics to be united around and refreshed by a renewed sense of shared discipleship to Jesus Christ, a deepened experience of and commitment to solidarity with the poorest and most vulnerable in the world, and a more fully developed understanding of both the common vocation to holiness of all the baptized and the specific vocations for ministry and leadership as they are being reshaped by time and circumstance. In other words, chastened and instructed by the crisis, a council agenda should not be an exercise in further damage control. It could be a specially graced occasion, when the various needs of the church for both personal fidelity and public responsibility, individual virtue and structural integrity, find common ground.

Admittedly, a new council cannot address all the challenges facing the church in the United States, nor should it try to do so. But a council can be a sign that we are not simply responding to a crisis but fulfilling the vision of Vatican II according to which all the members of the church, according to the charism and role of each, share in responsibility for the life and mission of the church.

This article also appeared in print, under the headline “The Potential of a Plenary Council,” in the October 28, 2002, issue.