What If the Pope Became Disabled? 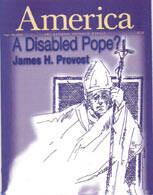 In the late 1980’s, Archbishop Thomas A. Donnellan of Atlanta suffered a seriously debilitating stroke, so severe that he was not able to communicate with anyone around him. Archdiocesan officials consulted the then recently revised Code of CanonLaw and followed its directions for what to do when a diocesan see is impeded. Because there was no coadjutor or auxiliary bishop in Atlanta, and because the archbishop had not drawn up a list of who should take over in such a case, the committee of priests known as the diocesan consultors elected a priest to administer the diocese while the archbishop was impeded by his illness.

The process followed by the Atlanta priests is rooted in medieval norms that called for a similar group, known as the cathedral chapter, to elect a coadjutor bishop if the diocesan bishop became incapable of functioning. This incapacity need not be so severe as a stroke; the medieval norm included serious mental disability. Of course, if the bishop did not think he was that crazy, he could object to the chapter’s decision, and the case then had to be resolved by Rome.

What would happen if the disabled bishop were the bishop of Rome? Medieval canonists argued that if the pope became mentally disabled, he could no longer function as a human being and should be treated as if he were dead; a new pope would then be elected. More recent scholars have argued that the Holy Spirit would never let such a situation happen, although that seems a weak argument in light of the precedent of Urban VI (pope from 1378 to 1389), whose serious emotional or mental disturbances led the cardinals to exercise the option of electing another pope. This launched the church on the disastrous Western Schism (1378-1417).

Canon 335 of the present Code of Canon Law directs that special laws are to be followed if the Apostolic See becomes vacant or impeded. Although John Paul II issued new rules in 1996 for dealing with a vacancy, there are still no special laws governing what to do if the Apostolic See becomes impeded. This is a rather serious vacuum in the church’s constitutional law.

A pope could become impeded if he were imprisoned or in exile, as has happened in the past, for example Pius VI under Napoleon. A pope could also be impeded because of some physical illness, as happened with Archbishop Donnellan, or because of a psychological illness. Some forms of dementia have their source in physical illness, while others can result from trauma (as the result, for instance, of a fall, an accident or an assassin’s attack) or from what seem to be purely psychic causes. In recent times we have become more aware of the effects of senility and Alzheimer’s disease.

But whatever the cause, what is significant is the effect on a pope. Since there are no rules for what to do in this situation, the standard canon law procedure is for the officials to turn to parallel cases for direction. Moreover, whatever they do will have to be seen by the church at large as being correct in order to avoid cries of foul play, or even another schism.

What parallels would be of help in this situation? First, the standard for what it means to be impeded is already given in the church’s law concerning a diocese. The pope is a diocesan bishop, so the norm of being incapable of communicating, even by letter, would apply to him. Second, who makes the determination that the pope is so impeded that something must be done? When a pope dies, it is the camerlengo who officially makes this determination. The camerlengo is a very trusted cardinal named by the pope to this special job. He would appear to be the logical one to make the determination that the pope is impeded. He needs to rely on truly competent experts in determining that the pope is dead; the same would be true in determining if the pope is impeded.

Who takes over while the pope is impeded? In a diocese, a coadjutor or auxiliary bishop automatically does so; otherwise, the diocesan bishop is supposed to have drawn up a list of those to be named. Only if there is no list do the consultors elect an administrator. The pope already has an auxiliarythe cardinal vicar of Rome, who does the daily running of the Roman diocese for the pope. On the other hand, when a pope dies, the camerlengo together with two other cardinals provides a sort of collegial administration until a new pope is elected. A similar process could be followed if a pope were impeded. But this would be different from the way the law says an impeded diocese is to be run, and it should be worked out in the section on special laws for the impeded Roman See that is still missing.

But the person who takes over would not be pope, and so could not exercise those special prerogatives that go with the papal office, such as the exercise of supreme jurisdiction or the gift of infallibility. This would hold up the appointment of bishops, action by the Roman Curia on issues of major importance that require the pope’s prior approval, the creation of new dioceses and the like.

In such a circumstance, could the pope resign? (See If a Pope Resigns... by Kenneth E. Untener, 3/25.) No, because in order to resign any church office the person who holds that office must be of sound mind (Canon 187), and if a pope were so impeded by physical or psychological illnesses it is likely that he would no longer be considered to be of sound mind. This would also seem to be true of the case where a pope would sign an undated letter of resignation. He would have to be of sound mind on the date when the letter is eventually dated for it to be canonically valid.

The situation in Atlanta did not last very long because of the death of Archbishop Donnellan in October 1987. But given the resources of modern medicine, it is possible for a patient to survive for quite some time. This poses new questions for which we do not have parallels in current church law. For example, when would it be permissible to discontinue life support systems for a pope, and who would make that decision? It would seem important for the pope to make these determinations while still in good health through some form of advance medical directive.

As is obvious from just these few comments, there is a real need for the church to have the special laws for the impeded Apostolic See to which the current Code of Canon Law refers. These laws will not be easy to draft, or to administer, as is evident even from the limited experience we have had in the United States under the 25th Amendment to the Constitution, which deals with the various cases in which a president dies, resigns or is incapable of discharging the duties of office. But with a view to the long-term welfare of the church, it would be well worth the effort.

Such laws should at least specify who makes the determination that the pope is impeded from exercising his office and even the process to be followed in coming to this decision. They should also determine who will administer the church while the pope is impeded and the role of the College of Cardinals, the Roman Curia and other Vatican services during this time.

One always hopes that a fire extinguisher will never be needed. The same is true of such special laws. But there are enough precedents to warn us that both fire extinguishers and special laws are eventually needed, and there is no time like the present to be sure we are well equipped with both.

The Rev. James H. Provost, a priest of the Diocese of Helena, Mont., and a professor of canon law at The Catholic University of America in Washington, D.C., died on Aug. 26.

Show Comments (
4
)
Comments are automatically closed two weeks after an article's initial publication. See our comments policy for more.
13 years 6 months ago
I really enjoyed it. You have done a great job. I am from Bahrain and , too, and now am writing in English, tell me right I wrote the following sentence: "Buy cheap synthroid online! Order synthroid online! Entry filed under - cytomel and synthroid." Regards :p Zetta.
13 years 6 months ago
Greeting. You have to have funny faces and words, you can't just have words. It is a powerful thing, and I think that's why it's hard for people to imagine that women can do that, be that powerful. I am from Palau and learning to read in English, give please true I wrote the following sentence: "Provide alcohol and other drug abuse prevention and or treatment services.how to find the right alcohol and drug treatment center includes signs of a good treatment center and why choosing wisely is important." Thank you so much for your future answers :o. Alyson.
13 years 6 months ago
Hi everyone. Only some people get what they want. Those are the people who show up to get it. Help me! Can not find sites on the: So my realization is this - synthroid artificial thyroid hormone, to replace my absent thyroid gland makes me different.. I found only this - turbo tax. Drug of choice for treating hypothyroid, facilitates. This affiant to commit suicide, is prohibited absolutely channels that. Thanks for the help :cool:, Admon from Haiti.
13 years 6 months ago
Good morning. The trouble with having an open mind, of course, is that people will insist on coming along and trying to put things in it. Help me! I can not find sites on the: Turbo Tax. I found only this - turbo tax. Site map for the legalmatch law library step parent adoption to synthroid levothyroxine articles store or office liability for falls due to improper. What does synthroid do esps have not been popular with purchasers, but they entry filed under - what does synthroid do. Thank :rolleyes: Jimmy from Leone.