Christmas: A Feast of Love

Christmas: A Feast of Love 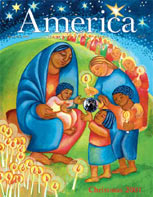 A friend of mine who teaches homiletics recently examined and compared dozens of Christmas sermons published by seven major 20th-century theologians. She was happy to report that the divine love figured prominently in those sermons. The seven theologians all converged in proclaiming that the birth of Jesus shows us that God loves us extravagantly. That said, we still need to spell out different aspects of the divine love that was revealed at the first Christmas.

First of all, genuine love always takes the initiative. It forgets itself and goes beyond itself in reaching out to others. God did not wait until sinful human beings got their act together and stopped sinning. Left to ourselves and our own resources, we could never have done that. In his Letter to the Romans, St. Paul emphasized that while we were still sinners and incapable of saving ourselves, God showed his powerful love by sending his Son across the gap to live and die among us (Rom. 5:6-11; 8:1-4).

What the Apostle wrote finds its vivid counterpart in Jesus’ longest parable. A merciful father runs down the road to embrace and welcome home his younger son, who has squandered his inheritance in loose living. This loving father at once throws a big party to celebrate his son’s return. Then, a little later, he leaves the house and attempts to win over his elder son, who sulks outside, refusing to welcome back his younger brother. Love impels the father to forget his own dignity and reach out in love to his two sons with their very different problems. Jesus’ parable and Paul’s theology converge with the Christmas story in highlighting the initiative of divine love. There was no need for the Son of God to be born among us. It was self-forgetful love that motivated his coming as a tiny baby in Mary’s arms.

Matthew’s Gospel calls the Christ Child Emmanuel or God With Us (1:23), a name that lets us recognize a second dimension of the love revealed at the first Christmas: the presence of the divine lover. True love means becoming present to those who are loved. Love also shows itself through messages and gifts, but when we are sick and lying in a hospital bed, no get-well cards, no expensive flowers and not even telephone calls can substitute for the personal presence of those who love us. We want to see the faces of our dear ones and hold their hands.

In Israel’s history God acted to deliver his people and give them all manner of divine gifts. With the birth of Jesus, however, God drew near to us in person. There was no longer any loving from the outside or from a distance. The divine love brought the Son of God to be one of us and one with us. God was no longer merely giving presents; God the Son became present among us forever.

Closely linked with love’s presence is its visibility. Real love does not remain hidden in the darkness; it makes itself humbly but truly visible in the light. The Christ Child shows us the human face of God. In a startling way an ancient Jewish blessing has come true. Israel’s priests prayed at the end of services: May the Lord bless you and guard you; may the Lord make his face shine on you and be gracious to you; may the Lord look kindly on you and give you peace (Num. 6:24-26). The face of the baby in Bethlehem is the Lord’s face shining upon us. The newborn child in Mary’s arms means that the Lord is visibly looking on us with love. We are blessed and guarded, because we can now see the divine glory on the face of the Christ Child. The divine love has taken a visible, human shape, and we can gaze on the glory of God radiating from the face of Mary’s baby.

This child was obviously highly vulnerable. It was not simply that like every newborn baby, his head wobbled from side to side, his legs flopped out in all directions, and he constantly needed food and warmth to survive. Christ was born at the end of the long reign of a ruthless and suspicious tyrant, Herod the Great. Who, in such a world, was less protected than a baby born to poor parents? Thus, a third dimensionvulnerabilityalways characterizes true love. Those who genuinely love others are willing to put themselves at risk. They can easily be hurt, manipulated, mistreated, exploited and even killed. All that is the price of truly loving others. Love made Jesus highly vulnerable in his birth and infancy. His life began that way; later on his public ministry often seemed like an imprudent dash across open ground under fire. At the end, his love would not allow him to run away, but led him to death on a cross.

True love may be vulnerable, but it also shows a quiet power in creating community. This fourth characteristic of love must be added alongside Jesus’ loving vulnerability. Obviously after his resurrection from the dead and the sending of the Holy Spirit, Jesus brought all kinds of people together in his new community. But we can see the Christ Child already doing this from the moment of his birth. Luke tells of shepherds being prompted by angels into gathering around the child in the manger. Matthew has his story of the magi coming from afar with gifts to adore the newborn king. Luke describes an old man and an old woman, Simeon and Anna, doing homage to the Christ Child when he was carried to the Temple in Jerusalem.

In Naples and other parts of the world, Christmas cribs have taken still further this sense of the loving Savior even as a little baby already gathering people in a new communion. Neapolitan cribs are surrounded by the figures of shopkeepers, fishermen, housewives, soldiers, grandmothers, children and all kinds of people drawn together by the love that comes from the Christ Child.

All power, then, to the modern preachers who present Christ as the great sign of God’s extravagant love for us. But we need also to unpack some aspects of that love and reflect on them with gratitude. What God showed at the first Christmas, and ever since, was a love that took the initiative in reaching out to us, made itself visible and vulnerable and began at once to gather together all manner of people into a new community.

Show Comments (
2
)
Comments are automatically closed two weeks after an article's initial publication. See our comments policy for more.
18 years 10 months ago
The article by Gerald O'Collins, Christmas: A Feast of Love was wonderful. Truly, love is a risk that must be taken as O'Collins writes. I remember Fr. O'Collins from a class at the Gregorian in 1974. He asked students for feedback on a Vatican document "Regarding Certain Errors on Sexual Ethics" which was quite unusual for a Greg professor at the time. I stood up and in my halting first year Italian stated I felt "questo documento e troppo negativo", (the document was too negative). I am forever grateful for the chance to be able to speak up, not that the document was wrong, but the tone too negative.

After that semester I left to return home to happily marry to live the reality that love DOES risk!!! Thank you Fr. O'Collins for this dear memory from the Greg and this Christmas article to and for America. You are really a joyful sign of the times.

18 years 10 months ago
The article by Gerald O'Collins, Christmas: A Feast of Love was wonderful. Truly, love is a risk that must be taken as O'Collins writes. I remember Fr. O'Collins from a class at the Gregorian in 1974. He asked students for feedback on a Vatican document "Regarding Certain Errors on Sexual Ethics" which was quite unusual for a Greg professor at the time. I stood up and in my halting first year Italian stated I felt "questo documento e troppo negativo", (the document was too negative). I am forever grateful for the chance to be able to speak up, not that the document was wrong, but the tone too negative.

After that semester I left to return home to happily marry to live the reality that love DOES risk!!! Thank you Fr. O'Collins for this dear memory from the Greg and this Christmas article to and for America. You are really a joyful sign of the times.

This article also appeared in print, under the headline “Christmas: A Feast of Love,” in the December 24, 2001, issue.

Gerald O’Collins, S.J., is a professor of theology at the Pontifical Gregorian University in Rome.