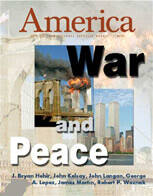 The United States is going to wage a war against terrorists, says President George W. Bush. Is this a just war according to the principles of the Catholic just war theory? For this issue we asked experts in the just war theory to examine this question and present their views.

Before looking at the U.S. response, it is important to make clear that the terrorists’ attacks violated almost every principle of the just war theory. First, wars can be waged only by legitimate authorities of a state. They cannot be declared by anyone who feels he has a just cause. The terrorists are not government officials. Second, the attack on the World Trade Center was directed at civilians who, according to the principle of civilian immunity, should not be targeted. And even if the Pentagon could be considered a military target, using a plane loaded with innocent civilians as a bomb is unacceptable.

By their actions, the terrorists have declared war on the United States, and we certainly have the right under the just war theory to defend ourselves with military force. But before we go too far down this path, we should ask if the use of the word war is apt. The use of the word by the president is rhetorically satisfying. It makes clear that this is a serious endeavor that will take great effort and sacrifice. But calling our response war gives the terrorists a stature that they do not deserve. It treats them like a government, when in fact they are more like organized criminalsmass murderers, not soldiers. Treating terrorists as criminals does not mean that the use of deadly force is ruled out. Police have the right to use deadly force to protect themselves and others from harm.

The rhetoric of war also makes it easier for the president to argue that we will treat nations that support terrorism in the same way that we deal with terrorists. This is easy to say, but difficult to carry out. If we discover that a foreign intelligence service gave money, arms or forged documents to Osama bin Laden, do we bomb the country? Do we bomb the offices of the intelligence service? What if the government did not know the resources were going to be used in the attack on the United States? Since the U.S. government has stated that a number of countries support terrorist groups, we could quickly be at war on many fronts.

But granting that the rhetoric of war has captured the day, it is appropriate to use the just war theory to guide us in our response. The fact that the terrorists acted immorally, against every standard of military conduct, does not mean that we have the right to do the same in response. We must not become what we hate. The just war theory emphasizes that waging war is a last resort, not a first option. Diplomatic efforts are to be preferred, not only because they are less violent, but also because, in the long run, only with the cooperation of other nations will we make the world safe from terrorism. Killing those responsible for these crimes will no more stop terrorism than killing some drug lords will stop drugs from flooding into our country.

The just war theory examines the legitimacy of the reasons for going to war (ad bellum) and the means that are used in war (in bello). The use of military forces by a country to defend itself and others from terrorist attack is legitimate if all else fails. But these forces must be directed against those responsible and not against civilian populations and civilian infrastructures (like power plants and water supplies).

During the Persian Gulf war, the U.S. military attempted to keep civilian casualties low, but the destruction of civil infrastructures, along with economic sanctions, resulted in the deaths of thousands of Iraqi civilians. Killing thousands of Afghan civilians would be a sacrilegious memorial to those killed in the United States. After decades of war and bad government, Afghanistan is already a basket case with millions of refugees. To bomb it back into the stone age, as some have suggested, would simply increase the suffering of a people who have little if any power over their rulers.

The terrorists should be brought to justice because of their crimes and because of the danger they pose to life in this country and elsewhere. If this cannot be done peacefully, then they are legitimate targets of military action. But in the use of military force we should not lose sight of our ultimate goal of rallying the world communityincluding the Islamic worldin a concerted effort to root out terrorism.

The importance of Islamic public opinion must not be underestimated if we are to achieve our long-term objective of eliminating terrorism. The president’s unfortunate use of the term crusade, for which he apologized, shows how ignorant Washington still can be when dealing with Muslim nations. Washington should instead be studying and using Islamic just war theory to isolate bin Laden and present a rationale for U.S. action. The United States has won worldwide sympathy as a result of these attacks. We must not dissipate that good will through intemperate action.

The Editors
Show Comments (
2
)
Comments are automatically closed two weeks after an article's initial publication. See our comments policy for more.
15 years 5 months ago
I have followed your reports on the just war theory and its application to the present conflict (10/8). When I think of the terrible weapons of contemporary war, when I think of the hundreds of thousands of refugees lacking shelter, food and water, subject to disease and the death of old and young, I cannot stomach any discussion of a “just” war. War is inevitable; it may even be necessary. But it is always very evil in contemporary times, demanding afterwards repentance and reconciliation on all sides. To link the word “just”—a weighty word indeed—with “war” is obscene.
15 years 5 months ago
The concentration of articles attempting to apply principles of the Christian “just war” (10/8) seem to have ignored a basic teaching of Jesus, “Love your enemies.” This Christian concept of love is not easily accepted by those who suffered the loss of loved ones or were injured by the Sept. 11 attack. But love prompted Jesus to offer his life on the cross so that we might share in his love. This love can permeate our lives when we allow it to be incorporated into our thoughts and actions. Then we are enabled to love our enemies. Jesus said, “Do good to those who hate you.” Probably the results would not be realized immediately.

Just imagine that we help people in any country to raise substantially their standard of living to relieve hunger, sickness, lack of education and unemployment. Of course, this would require that we lower our own standard of living. I suspect you are not accepting this idea enthusiastically. We would live simply so that others may simply live.

Jesus ends by saying, “The measure you measure with will be measured back to you.” This is obvious to Attorney General John Ashcroft, who recently warned that new terrorist attacks can be expected when our country takes military action.

We must explore the practicality of the ideal proposed by Jesus, “Love your enemies.” With God all things are possible. Our faith, hope and love need to be enkindled and enthused.