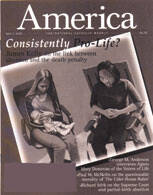 Cardinal Joseph Bernardin articulated a consistent ethic of life, which included opposition to both abortion and the death penalty, in 1985. Ten years later, in his encyclical The Gospel of Life, Pope John Paul II taught that opposing capital punishment should be part of a pro-life witness for a culture of life that promotes human dignity and solidarity. The National Conference of Catholic Bishops as well as individual bishops across the country have repeated the teaching.

Have Catholics in general and pro-lifers in particular been listening to this message from their church’s hierarchy? Are abortion opponents becoming less likely to support capital punishment? And what about pro-choice supporters? Where do they stand on the death penalty? Until recently, opposition to capital punishment was widely assumed to be part of any politics characterized as "progressive." Are pro-choice advocates consistently progressive? To answer these questions, we will review the data from the General Social Survey (G.S.S.) of the University of Michigan for the early 1980’s and more recently.

Abortion and the Death Penalty, 1982

Are these attitudes interconnected? While causality is difficult to prove, a society that makes killing fetal life less problematic probably makes the state killing of murderers less problematic as well. And vice versa. While we can argue about causality, it seems naïve to assume that widespread changes in how people feel about abortion would not eventually affect other judgments about life and death. Surveys show, for example, that supporters of elective legal abortion are especially likely to support euthanasia.

In an earlier essay in America (9/26/87) I reported that in 1982 Americans overwhelmingly supported capital punishment, with 73 percent in favor and 27 percent opposed. Then, as now, the data on abortion was more complicated and more difficult to summarize: Most Americans favored neither a legal prohibition of all abortions nor "abortion on demand." Of those who opposed all legal abortions in 1982, 45 percent also opposed the death penalty. In other words, Americans who opposed all legal abortion were twice as likely as other Americans to oppose the death penalty. On the other hand, those supporting legal abortion for any reason a woman might givethe pro-choice absolutistswere the least likely (only 21 percent) to oppose capital punishment. "In other words," I concluded in my article, "someone looking for allies in opposing capital punishment is far more likely to find them at a pro-life rally than at a pro-choice rally. About twice as likely. Yet, pro-choice is defined as a liberal’ position and pro-life as a conservative’ one. Once again we learn that life is more complicated than labels."

Abortion and the Death Penalty in the 1990’s

During the early 1990’s support for capital punishment continued to increase, with 77 percent supporting it in 1995. But as the decade continued, support began to falter. In 1998, 73 percent of the respondents said they favored the death penalty, a decline of almost four percent to about the levels found in the early 1980’s. Opposition to capital punishment among Catholics (27 percent) in 1998 was greater than it was among Protestants (24.2 percent). Catholics who attend church frequently (nearly every week or more often) are even more likely to oppose the death penalty (40 percent). The bishops’ message appears to be reaching Catholics in the pews.

Support for the absolutist pro-choice position also declined at the end of the 1990’s. In 1998 about 41 percent, four percent less than in 1996, said they approved of abortion for any reason a woman might give. Again, Catholics who attend church frequently are more likely to oppose abortion. Catholics who say they are strongly attached to their church are far more likely than strongly attached Protestants to disfavor both abortion and capital punishment.

The relationships found in the 1982 datathat pro-choice Americans were the most likely to support the death penalty and pro-lifers the least likelydeepened during the 1990’s. The tendency for consistency among Catholics has increased even more dramatically. In 1996, 62 percent of Catholics who opposed abortion for any reason (including rape and fetal defect) favored capital punishment; in 1998, 52.5 percent favored it. That is a noticeable dip. Pro-lifers, especially those who attend church frequently, are continuing to turn away from capital punishment. The same direction toward consistency, but weaker, is found among those Catholics opposed to abortion for "soft" (lack of money, unmarried) reasons. Clearly, pro-life Catholics are getting the message.

On the positive side, when compared with the rest of the population, Catholics are clearly hearing and responding to the pope’s and bishops’ consistent ethic of life. During the 1990’s, more Catholics became consistently both against abortion and capital punishment. On the other hand, the Catholic community as a whole has a long way to go before it is consistently pro-life. The survey facts remain daunting for those seeking to contribute a consistent ethic of life to American culture and politics. But, for perspective, the survey data are even more daunting for those still serious about what used to be called a progressive liberalism. Whereas opposition to abortion increasingly leads away from pro-death penalty sentiment, there is an increasing tendency of the most pro-choice to be the most favorable toward the death penalty.

Attachment to religious traditions leads to very clear anti-abortion sentiment, but it does not issue yet, except for Catholics and then only weakly, in a consistent ethic that connects opposing abortion and opposing the death penalty. Still, the survey data allow us to characterize a consistent ethic of life as a potentially important emergent trend. The adjectives "emergent" and "potentially" are necessary, for there is no nationally recognizable successor to Governor Robert Casey of Pennsylvania as the political standard-bearer for a consistent ethic approach to the life issues. The politics of the moment greatly impede it. Tax-cutting Republicans can tactically absorb anti-abortion sentiment and have been able so far to appease many who are sympathetic to what is called the religious right, but they cannot claim a consistent ethic that includes a federal role in reducing economic pressures toward abortion and expanding health care. And since President Reagan, a pure and undebated pro-choice position has been a litmus test for anyone seeking national prominence in the Democratic Party. Finally, both parties rush to demonstrate enthusiastic support for the death penalty.

Nevertheless, there are at least some empirical grounds to think that were a consistent ethic of life to receive more attention in the churches and elsewhere, the connection between opposing abortion and the death penalty would contribute to the sense of human solidarity that all authentically progressive movements require for their incremental growth. In his characterization of a consistent ethic, Cardinal Bernardin spoke of "the strength of a sustained moral vision." The only final failure for social movements is a loss of their idealism. While this seems to be the case for our national politics, it seems not at all the case for the grass-roots right to life movement. That these are thoughts for the long run should merely be obvious but, at the beginning of a millennium, they are hardly discouraging.