The State of Theological Education in Seminaries 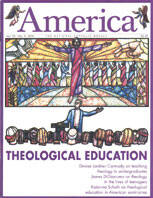 Tell me what seminaries and schools of theology are really like these days. How many students attend? Who are the faculty members, and do they enjoy their work? From what background do students come, and how do they approach their formation and education? What is their vision for future ministry? Since completing my study of theologates, Seminaries, Theologates, and the Future of Church Ministry (Liturgical Press, 1999), I am frequently asked such questions. Some people are merely curious, having few preconceptions; others suspect that these institutions are bastions of extremism on either the right or left. My findings suggest that neither of the latter two situations is the case. Rather, the 42 schools I studied represent a montage, a heterogeneous mix with schools as different from each other as the students and faculty within them.

How many students attend?

Who are on the faculty, and do they enjoy their work?

The number of faculty members is about 750, down from nearly 900 a decade ago. The losses have been entirely of priestsfrom 684 to 489. Women religious remain stable at 95, lay women have increased from 33 to 49, and lay men have increased from 88 to 108. Their average age is 51; more than 95 percent are Caucasian. The vocation of the seminary faculty has an enhanced communal dimension, with responsibility for involvement in the unique process of ministerial formation, including academic and pastoral, human and spiritual components. According to interviews and surveys, faculty members are on the whole extraordinarily satisfied with their day-to-day work, though they also report some distressing undercurrents.

On the positive side, by most measures faculty are highly satisfied with their situations. They believe, for example, that their institutions value their teaching and the work they do with students, they have high regard for their colleagues, and they are pleased about their particular working environment. Typical of remarks made by faculty members is this one: "This work for the whole church makes me realize how fortunate I am to be in a position to influence a future generation of priests and lay ministers. I get tremendous satisfaction when I see people I have taught doing well in their parishes. One of the best ways of spreading the spirit of Vatican II is to bring it alive in classes, showing those who were born after the close of the Council what it has meant for the life of the church."

On the negative side, faculty members complain most about excessive workload and lack of time for their own research and writing. In diocesan schools where responsibility for personal and spiritual formation of seminarians rests with the faculty, this complaint is heard more vociferously. As lay student enrollment grows, especially in schools conducted by members of religious orders, faculty members often assume the role of formation advisers to these students, and so the complaint is becoming more widespread. Faculty members are challenged too by the attitudes of some students. One long-term priest faculty member lamented: "Only in these past few years is the word of first-year theologians taken to be more credible than mine. Too often they find the sympathetic ear of our detractors, who are all too ready to believe the student’s negative judgment without even consulting with the faculty member." A few instances of individuals’ being dismissed from seminary faculties have unnerved many others. Also, more seasoned faculty members are noticing a fracture between themselves and some younger members who have less appreciation for Vatican II. These concerns may contribute to the more generalized feeling of uncertainty and uneasiness about the future that characterizes the attitude of many faculty members.

From what background do students come, and how do they approach their formation and education?

No question is asked more persistently than the one about characteristics of students preparing for priesthood, and, to a lesser extent, for lay ministry. The most accurate assessment is complexwhether considering ideological stance, religious and educational background or personal qualities. Although exact measures of these characteristics are not available, the experience of the large sample of faculty confirms that students cover the spectrum. Some outside observers are convinced that students are more rigid and traditionalist than 10 years ago. Most faculty members would not agree. They believe that, generally speaking, the same small proportion of these traditionalists (about 10 percent) can be found these days, but the impact of their views far outweighs their numerically small presence. One academic dean noted: "The students who come with a rigid and narrow understanding of their faith often have the support of people outside the seminary who agree with their positions. They feel quite free to defy faculty, realizing that faculty members have little recourse. The declining number of seminarians has led some dioceses to accept students who have neither the aptitude nor the personal qualities to be a priest; yet these are the very students who tend to challenge any thought that does not correspond to their preconceived notions of church teachings."

One perhaps surprising finding is the large proportion of seminariansapproximately halfwho enter seminary on the heels of a conversion. More often than not the conversion is a return to the Catholic faith of their childhood, but a significant number are also recent converts from another faith. These students pose a particular difficulty when it comes to teaching them in the same classes with students who have a rich educational and practical experience of the church. Depending on the individual’s intellectual capacity, the task may be made easier or more difficult. The majority of students fall into the categories of good to average academic ability, and 10 percent are highly qualified, as were their counterparts 10 years ago. For a growing proportion of seminarians (25 percent), English is their second language. Though many of these are quite intelligent, few have had the language training needed to study theology at the graduate level. The educational implications are obvious.

In the final analysis, faculty members agree that the vast majority of students are sincerely concerned about learning the theology and pastoral skills required to minister in an increasingly diverse church, and most have the capacity to learn well. Faculty members worry, however, about what they perceive as the lack of a match between seminarians’ understanding of the church and the understanding of today’s Catholic population. A pastoral theologian put it this way: "If we look at the range of seminarians, ideologically they tend to cluster to the right of center, while people in our parishes would be to the left. When the large number of priests approaching retirement are no longer present to ameliorate the situation, I think we may be heading for a clash of ideologies."

What is the vision for the future of ministry?

This discussion raises critical issues for the whole church. The most basic issue concerns the nature and identity of the church in a pluralistic and multicultural society. Two discordant views emerged from interviews: positive or negative response to the Second Vatican Council and a desire for engagement with the culture or separation from it.

Differences between faculty and students were striking, with more of the former insistent on a Vatican II stance that would engage the culture. While many students also supported those views, others were vehemently opposed to a "church in the modern world." All tended to be troubled by the discord they perceive surrounding these questions. Given the heterogeneity of the 62 million Catholics in the U.S.whether cultural, racial and ethnic, or age, economic and educationalthe task of responding to many different groups weighs heavily. These dissimilarities among Catholics lead to this fundamental concern about future ministry: how to deal with the extreme differences among Catholics and overcome the attitude of intolerance that pervades some groups and situations.

Another critical issue identified by faculty and students was the enormity and acuteness of ministerial needs. The increasing Catholic population includes many new immigrants whose requirements for evangelization and material care are vastly different from church members who are long established in this country. Further, the emerging generations of adult Catholics who were often poorly catechized now face the task of educating their own young children in a faith they feel they cannot adequately convey. At the same time the tremendous desire for spiritual care grows among many segments of Catholic churchgoers. Corresponding to these new predicaments is the declining number of ordained and religious ministersby over 110,000 in the past 30 years and 30,000 in the past 10 years. If these ministries are to flourish, church structures will need rebuilding so that they involve greater collaboration and incorporation of lay ministry.

Theological schools have endeavored to address these important issues and have made some progress, but the implications of a multicultural church, for example, are still poorly understood inside and outside seminaries. Furthermore, other issues having as great an impact continue to arise. How can the role of the church in public life be enhanced? Where will we find the leadership required to deepen the already valuable and pervasive influence of the church in matters of biomedical ethics, business ethics and globalization? Who will provide the intellectual leadership for the church in the future? How can lay Catholics who are highly educated in their fields contribute to the church’s discussion of these issues? Theologates have done well to prepare men and women for internal church ministry, but the future demands attention to these external affairs as well.

Katarina Schuth, O.S.F., holds the Chair for the Social Scientific Study of Religion at the Saint Paul Seminary School of Divinity, University of St. Thomas, in St. Paul, Minn.