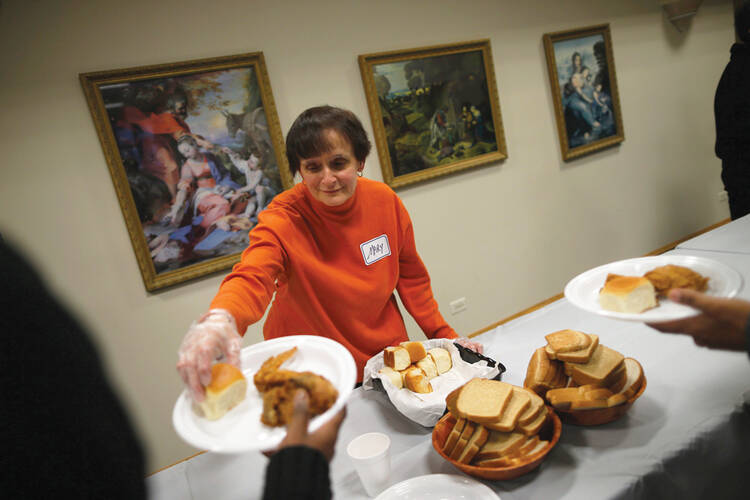 Concern for the poor is a major focus for Pope Francis, and it should be for each of us. The psalmist reminds us, “The Lord takes delight in his people, honors the poor with victory” (Ps 149:4). How many times have we heard Pope Francis say that he wants a church “that is poor and that is for the poor”? In his apostolic exhortation “The Joy of the Gospel,” he quotes an address by Pope Benedict XVI to the bishops of Brazil: “Today and always, ‘the poor are the privileged recipients of the Gospel.’” Even more directly, Francis goes on to explain: “We have to state, without mincing words, that there is an inseparable bond between our faith and the poor. May we never abandon them.”

The focus on charity and the poor not only is fundamental to the Gospel; it has been a consistent feature of Catholic social teaching from its modern advent. For example, in “Rerum Novarum” (1891) Pope Leo XIII wrote that the church “intervenes directly on behalf of the poor, by setting on foot and maintaining many associations which she knows to be efficient for the relief of poverty.” More recently, in “God Is Love” (2005), Pope Benedict wrote, “The Church cannot neglect the service of charity any more than she can neglect the Sacraments and the Word” and pointed out that these duties “presuppose each other and are inseparable.” He went so far as to write: “A Eucharist which does not pass over into the concrete practice of love is intrinsically fragmented.”

Each pope builds upon the teaching and example of those who preceded him. That is the way our church lives, breathes and grows.

When we speak of the poor and vulnerable in Catholic social teaching, unavoidably we look to Jesus himself. It begins and ends with him. St. Paul writes that for our sake, and out of love for us, Jesus “became poor” (2 Cor 8:9).

How can we forget, for example, the refrain in the Christmas story that there was no room for them in the inn? St. Paul writes that in his incarnation Jesus “emptied himself, taking the form of a slave” (Phil 2:7). He could have been born in a palace fit for a king, but he was a different kind of king. Salvation history reveals that reality in the daily details of Jesus’ life and in others involved in his salvific enterprise, like the lowly maiden who said, “May it be done to me according to your word” (Lk 1:38).

In a recent conversation, a man living on the streets asked me whether I thought Jesus had been homeless. I said that Jesus was certainly a man without an address. To a would-be follower, Jesus explained, “Foxes have dens and birds of the sky have nests, but the Son of Man has nowhere to rest his head” (Lk 9:58).

During his years of public ministry, Jesus was an itinerant preacher. As he journeyed from one town to another, his mission was supported by a group of followers. The Gospel of Luke tells us that Jesus was accompanied by the Twelve, some women (Mary Magdalene, Joanna and Susanna) and “many others who provided for them out of their resources” (8:3). We have no address for Jesus. According to the Catechism of the Catholic Church, Jesus “shares the life of the poor, from the cradle to the cross; he experiences hunger, thirst and privation” (No. 544). He had no home and died with no possessions.

Jesus Identifies With the Poor

In the same paragraph, the catechism continues: “Jesus identifies himself with the poor of every kind and makes active love toward them the condition for entering his kingdom.” In the Beatitudes, Jesus called the poor “blessed” and promised them entry into the kingdom of God.

The parable of the Last Judgment describes how Jesus, the king on a glorious throne, will judge people at the end of time (Mt 25:31-46). The yardstick for this judgment, of course, is how we treated the poor—those who are hungry, thirsty, strangers, naked, ill or in prison. Jesus identifies himself with the “least” of these brothers and sisters. There is no gap between Jesus, our king, and the poor and those in need. He fully identifies with them. He makes this crystal clear when he says, “I was hungry.... I was thirsty.... I was a stranger” and so on. And lest we fail to grasp Jesus’ appropriation of the pronoun “I” to refer to himself, he gets even more specific: “Amen, I say to you, whatever you did for one of these least brothers of mine, you did for me” (Mt 25:40).

To underscore his identification with the poor and his challenge to us to do the same, he says at the final judgment to those who fail the test: “Depart from me, you accursed, into the eternal fire prepared for the devil and his angels.... What you did not do for one of these least ones, you did not do for me” (Mt 25:41, 45). Thus there can be no greater solidarity and identification with the poor than that of Jesus.

The Challenge to Serve the Poor

As Jesus was born poor and thereafter identified himself with the poor, he also challenges each of us, as his followers and after his example, to serve the poor.

Truly to serve the poor is to heed the challenge of St. James, who insists: “If a brother or sister has nothing to wear and has no food for the day, and one of you says to them, ‘Go in peace, keep warm, and eat well,’ but you do not give them the necessities of the body, what good is it? So also faith of itself, if it does not have works, is dead” (2:15-17).

In recent decades, the church’s commitment to the poor is often referred to as our “preferential option for the poor.” In fact, it can be called a divine preference, for in the words of St. John Paul II, God shows the poor “his first mercy.” That is also our challenge as followers of Jesus. In “The Joy of the Gospel,” Francis again quotes Benedict XVI, who writes that the option for the poor “is implicit in our Christian faith in a God who became poor for us, so as to enrich us with his poverty.”

Pope Francis also challenges Catholics to see this preferential option for the poor as one mainly of “privileged and preferential religious care,” for he writes that “the worst discrimination which the poor suffer is the lack of spiritual care.” To walk with those who are poor, and accompany them both spiritually and materially, is integral to Christian discipleship. Not one of us is exempt.

And the work bears fruit; our faith is deepened and our spiritual journey enriched. As anyone who has been involved in any kind of outreach to the poor understands, the giver “receives” much more than what one “gives.” It is, after all, the work of God.

Though this truth is often ignored, it is essential to understand that the poor “have much to teach us,” Francis writes. “Not only do they share in the sensus fidei, but in their difficulties they know the suffering Christ. We need to let ourselves be evangelized by them. The new evangelization is an invitation to acknowledge the saving power [of God] at work in their lives and to put them at the center of the Church’s pilgrim way.” In and through our experiences with the poor, God shares his mysterious wisdom with us. It requires that we be close to the poor and to make them feel at home with us, especially in our parishes.

In a particular way, Pope Francis continually challenges us to walk with the poor in faith and charity. This means coming to know and serve the poor in our world and in our individual lives and to seek them out as “preferential.” It transforms love into action. In his first letter St. John writes, “If anyone says, ‘I love God,’ but hates his brother, he is a liar; for whoever does not love a brother whom he has seen cannot love God whom he has not seen” (4:20).

In the end, we will assuredly see in the faces of the poor the face of the suffering Christ and ultimately the light of the risen Lord, his abiding love for them and each of us. To be a Christian thus means to be like Christ and his church—a church that is poor and that is for the poor. It means following and imitating Jesus, who actively sought out the poor. 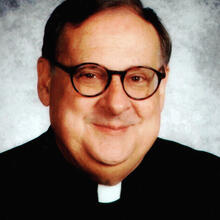 Msgr. Peter J. Vaghi is pastor of the Church of the Little Flower in Bethesda, Md., and chaplain of the John Carroll Society in Washington, D.C. His latest book is Encountering Jesus in Word, Sacraments, and Works of Charity (Ave Maria Press, 2013).

Show Comments (
1
)
Comments are automatically closed two weeks after an article's initial publication. See our comments policy for more.
Bruce Snowden
8 years 5 months ago
How poor was Jesus? As with everything there are levels, so was Jesus relatively poor, or absolutely poor? I think he was absolutely poor,no income and depending on the generosity of followers, especially compassionate women to look after his material needs, providing clothing, shelter, food, allowing him to "kick off his sandals" restfully, so to speak inbetween ministerial work. The Gospel tells that at one point he didn't have the necessary available cash to pay the Temple tax, apparently neither did Peter, so, enterprisingly Jesus used Omnipotence telling Peter to go catch a fish and take the money out of the fish's mouth to pay the Temple tax for both of them. The other Eleven had to shift for themselves lacking direct Divine intervention as we often have to do, trusting that somehow human intuition and Divine Providence will link together successfully. So then, while Jesus as a grown man in ministry was absolutely poor, it wasn't that way growing up How can I say that? Well, first of all, Joseph was a successful construction worker, building not only roads, but also was a skilled wood worker, very able to provide a decent living for his wife and Son. I find it impossible to believe it was a "paycheck to paycheck" existence which speaks of near destitution, something that the Heavenly Father would never allow his Spouse and the Second Person of the Blessed Trinity and God's trusted and competent provider, St. Joseph to endure. Besides Joseph's skills as husband, father and provider, there was also the likelihood that Mary pitched in in a womanly way, preparing and selling handmade products like embroidery and Preserves. Besides, all that Gold and other expensive gifts from the Magi, probably worth into the thousands of dollars, did a lot to provide for the Holy Family in Egypt until Joseph found work and also became a nest egg a "savings account" as needed. In short as far as I can see and suggest, while Jesus in ministry was absolutely poor by choice, he grew up in a pretty well-off family.