15 years after 9/11, are churches better prepared to respond to crises? 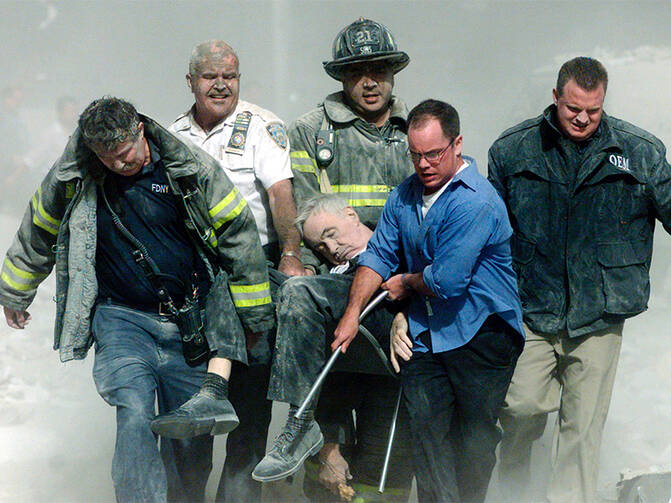 In late August, as the 15th anniversary of the 9/11 attacks loomed, religious leaders tuned into a webinar to prepare themselves for a possible future disaster.

“Who was the first official casualty of 9/11?" asked Monsignor Stephen Rossetti, a Catholic priest and psychologist who led the webinar on “Shepherding in Tragic Times.”

"Father Mychal Judge,” he said, answering his own question, and referring to the priest who was fatally injured while ministering amid the chaos of the North Tower lobby.

“We ourselves, too, are first responders," Rossetti continued. "People—sure they need firefighters, sure they need police. But we bring our faith and our compassion and our care and our community to help people.”

More than 150 participants—priests, lay people, Catholics, Protestants—listened, asked questions and took notes, in hopes of being in a better position to help others as well as themselves if a natural disaster or a terrorist attack hit their local area.

Rossetti, president emeritus of Saint Luke Institute, a Maryland-based treatment center for Catholic men and women, has held two in-person training sessions similar to the webinar. One was in Biloxi, Miss., after Hurricane Katrina. The second was in Orlando, Fla., months before the Pulse nightclub attack, unknowingly readying leaders in that diocese to help victims there.

But Rossetti said many still need training, and many don’t realize it. The webinar was offered for free and remains on the institute’s website in hopes of giving more people access to the information.

“I think we need to have a plan,” he said, “not only sort of a physical plan of who does what but also kind of an emotional plan—how we’re going to deal with this emotionally.”

Rossetti’s not the only one who’s concerned that there needs to be more preparation for possible disasters that will require a religious response.

Peter Gudaitis of the New York Disaster Interfaith Services, which was created after 9/11, said about 20 to 25 percent of New York City religious leaders have attended its training sessions.

He said there’s no question that more training has been available to faith leaders since 9/11, both in his metropolitan area and nationwide.

“What percentage of congregations and religious leaders take training versus don’t is still disproportionately in the 'don’t' category,” he said.

Gudaitis also is president of the National Disaster Interfaiths Network, which began in 2005 after Katrina and offers sessions that range from preparing congregations generally for emergencies to helping faith leaders consider how they’d help in a health pandemic or active shooter situation.

Since 2013, more than 1,500 people have attended Federal Emergency Management Agency workshops on protecting houses of worship and more than 12,000 people have signed up for similar FEMA webinars, a FEMA spokeswoman said.

The agency launched a web page in 2015 of resources on the topic, including playbooks for earthquakes, wildfires and tornadoes.

FEMA is set to honor Jamie Aten, founder of the Humanitarian Disaster Institute at Illinois’ Wheaton College, as a “community preparedness champion” at a Sept. 13 White House ceremony.

Although Aten has trained more than 2,000 individuals in churches and other religious organizations, he, too, said more needs to be done.

“We have found an alarming trend -- most churches realize there are threats, but few do anything ahead of time to actually prepare for disasters,” he said in a statement.

Gudaitis recommends that congregational leaders get to know local emergency managers and Red Cross officials before a crisis occurs. He also said religious organizations should do risk assessment, determining in what ways they are vulnerable, and they should have an action plan.

Just as police officers need to know that their families will be safe at home, congregations need to shore themselves up for possible eventualities before they do community outreach.

That means, he said, that a congregation's 12-step program, the food pantry and the sanctuary may suddenly be in more demand. So there should be a written “continuity of operation” plan.

In general, it’s the practical aspects of preparation that can be particularly challenging for congregation leaders to accomplish.

Gudaitis recently led a faith-based training in Arlington, Va., and only two out of the 40 or so congregations represented had practiced evacuating their sanctuaries in the event of an active shooter.

“To get a religious leader to agree to disrupt liturgy and do an evacuation seems like an inconvenience and I get that,” he said. “But what’s more inconvenient—a drill once a year, where everybody evacuates safely, or that tragedy that happens someday and far more people die or get injured than should have because they were unfamiliar with how to get out of the sanctuary quickly?”

Rossetti said a key part of his training is to help faith leaders prepare for the sometimes long emotional road after an incident.

While congregations may be able to offer a prayer vigil or worship service shortly after a community tragedy, he said spiritual leaders need to be patient as they help people after a profound traumatic event like the Sandy Hook Elementary School shooting in Connecticut or the fatal attack on members of Emanuel African Methodist Episcopal Church in South Carolina.

“Simple answers are usually not helpful,” he said in his webinar. “What they need is someone to walk with them in the process. Their faith is being questioned. Their faith has been challenged. They’re moving through this spiritual grieving process. … Help them move through that. Walk with them. Say, it’s OK, I’m here for you. Let’s pray this. Let’s tell the Lord how we feel.”

It was that lesson about the need for long-term assistance that webinar participant Karen Adams, the minister of music at an Evangelical Lutheran Church of America congregation in Salem, Va., hopes to carry with her.