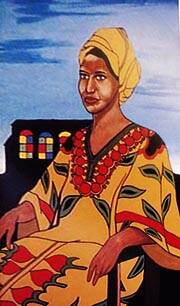 They streamed into Holy Child Jesus Church in Canton, Miss., and the following day into St. Marys in West Jackson much like the shepherds and kings of old sought out the balm of Gilead in the cave at Bethlehem. They had come to celebrate the life and death of one Sister Thea Bowman, a black Catholic Franciscan nun who had become nationally recognized for introducing black American culture, song and ritual into Catholic liturgy.

They came from the four corners of the United States—from the West Coast, from the East, from the Franciscan mother house in La Crosse, Wis., to Sister Theas hometown in Canton, where she received the roots and heart of her special evangelizing. They arrived in buses, cars and by train. Black, white, Catholic, Protestant, Jew. The hierarchy of the Catholic Church, the recognized and the unrecognized, men, women and children-especially the children. For they knew they were special in the eyes of Sister Thea. They were her hope, her joy, her pride, and it was for them that she established the Sister Thea Bowman Foundation for the Catholic education of youth in the state of Mississippi.

"Who was Sister Thea?" called out Father John Ford, her Franciscan brother who delivered the moving eulogy at her funeral Mass, April 3. We know what she accomplished but who was she? This black nun who touched so many, who showed us dimensions of our souls that we didnt know existed. Now that she has gone, we ask ourselves, “Who was she, this granddaughter of a slave?”

Her accomplishments are easy enough to itemize. She helped to found and served on the faculty of the Institute of Black Catholic Studies at Xavier University in New Orleans, the only black Catholic university in the Western hemisphere. She helped organize the 1987 Black Catholic Congress. She was the director of Intercultural Awareness for the Diocese of Jackson. She is credited with having incorporated African rituals and dances, as well as African-American folk songs into the Mass.

"We do not want to change the theology of the church," she explained to those made uneasy by any deviation from white, European liturgical expression. "We just want to express theology within the roots of our black spiritual culture."

So it was that a prominent member of the hierarchy, Cardinal Bernard F. Law of Boston, could proclaim her the true balm of Gilead at her African-American-inspired funeral Mass:

"At a time of much division in the church, Sister Thea possessed the charismatic gifts to heal, to bring joy to the church. She had no time for useless, destructive arguments. She was too busy celebrating life. Be woman. Be man. Be priest, Sister Thea would say. Be Irish¬American, be Italian-American, be Native-American, be African-American, but be one in Christ. She was poet, preacher, master teacher and blessed with an extraordinary voice. She challenged us to own our individuality, yet pleaded for us to be one in Christ. This was her song, and no one sang it more eloquently than Sister Thea Bowman."

Six days before dying of cancer on March 30, Sister Thea was named this years recipient of the prestigious Laetare Medal from Notre Dame University, the highest honor given to American Catholics. The award will be presented posthumously at the universitys May 20 commencement, said a spokesman of the university in South Bend, Ind.

Throughout the ceremonies of the wake and the three-hour funeral celebration, those whose lives were moved by Sister Thea struggled to answer Father Fords question, "Who was she?"

The Most Rev. John H. Ricard, S.S.J., Auxiliary Bishop of Baltimore, called her the "springtime in everyones life" and noted how appropriate that she die in the spring; “how fitting that we celebrate the new life of Sister Thea in this the spring."

The Most Rev. William H. Houck, Bishop of Jackson, Miss., who had known and worked with Sister Thea since 1979, said that she was "gifted, Spirit-filled and sometimes downright challenging." Mike Wallace of "60 Minutes" would have to agree since, despite his resistance, Sister Thea managed to get him to say on national television, "Black is beautiful."

The Rev. James A. Voelker, Pastor of St. Josephs Church in East St. Louis, Ill., put it another way. "I just dont know who Im going to get to mess in my business anymore."

"Thea means Of God," said Sister Francesca Thompson, Franciscan nun and assistant dean of Fordham University, Bronx, N. Y. "I dont know who Thea was, but I know she was sent by God. She was the God-gilded ice sent dancing, swaying, sashaying into our lives. She was song. She was the joyous Franciscan always." She even sashayed her way into the Presbyterian church in North Jackson. "Sister Thea conducted a one-hour service that our congregation will never forget," said the Presbyterian minister. "By the time it was over she had the whole place standing up, holding hands and belting out We Shall Overcome!"

She was as comfortable with the bishops of the church as her rhetorical "old lady on the bench." And even though Sister Dorothy Ann Kundinger, Sister Theas best friend, confidante, nurse and co-minister, placed the Kente cloth made for royalty over her coffin, Sister Dorothy knew as well as anyone that their friend was there, first and foremost, for the downtrodden, the poor, the suffering; the discouraged mother, the lost child, the wayward husband. She was there for the religious, the laity, the happy and the sorrowful. She was there to bring back that old-time religion "because old-time religion teaches us to love one another."

All her awards and recognition must have faded in the sight of her people manifesting their love for one another at her funeral services. One could almost hear her cheering, "Good news! Chariots a comin!"

Sister Thea was buried on Wednesday, April 4, next to her parents, Dr. Theon Bowman and his wife Mary Esther in Memphis, Tenn.

Mary Queen Donnelly is a columnist for The Times Picuyne and a native of Canton, Miss.

Show Comments (
1
)
Comments are automatically closed two weeks after an article's initial publication. See our comments policy for more.
13 years 8 months ago
Thanks for reminding us what a gift Sr. Thea Bowman was to all of us. I got to see her when she visited Denver. She had been diagnozed with cancer when she came to Denver, but she was vibrant as ever. Somehow, some of us visited her afterward in her hotel room while she rested in bed. She again joined us for a reception. Gaylene Watts Harris