The Future of Ecumenism 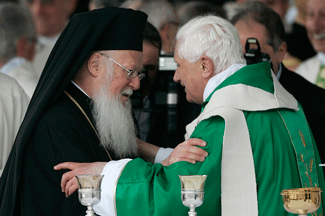 The November 8 issue of America features an article by theologian Christopher Ruddy on how the U.S. bishops can work toward Christian unity. America has taken up the issue of ecumenism many times over the years. Here are two notable articles on the subject.

In the August 27-Sept. 3, 2007 issue, theologian Richard Gaillardetz reflected on the history of ecumenism in light of the Vatican’s 2007 statement, Responses to Some Questions Regarding Certain Aspects of the Doctrine on the Church, which was issued in July by the Congregation for the Doctrine of the Faith.

In the October 28, 2000 issue, a group of scholars analyzed Dominus Iesus, another Vatican document on the Catholic Church’s relationship with other churches. Among the participants was Francis A. Sullivan, S.J., who was pleased by some elements of the document, but disappointed by others. The document, he wrote, "has some remarkably positive points that seek to improve relations with the Orthodox." Yet he also notes that "the positive assessment of other Christian communities expressed at Vatican II...would surely have warranted a more positive appreciation of the ecclesial character of the Anglican and Protestant communities." 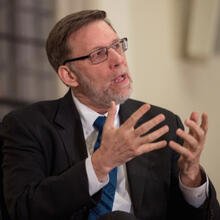 Francis A. Sullivan
Show Comments (
3
)
Comments are automatically closed two weeks after an article's initial publication. See our comments policy for more.
Craig McKee
10 years 3 months ago
Noted Boston University liturgical scholar Horace T Allen predicted the future of ecumenical relations in light of the new liturgical translations which have been foisted by the Vatican upon the English-speaking world:
Craig McKee
10 years 3 months ago
Link to Dr. Allen's comments:
http://www.abc.net.au/rn/talks/8.30/relrpt/stories/s1099662.htm
Michael Barberi
10 years 3 months ago
The Vatican's position on ecumenism is another example of an exaggerated fear of losing power and authority rather than seeking and embracing Christ's message and the truth. Many Catholics have left the Church over the past 40 years. Fortunately, many of them have found Jesus alive and well in other Christian Churhes.

Instead of writing artlcle after article (which I endorse), why not "do something more effective"?  Certainly a march on Rome would likely be consisted a heresy, perhaps a heresy for legitimate change.  Did not Jesus demonstrated his profound displeasure over the mismanagement of his father's house and the behavoir of Jewish Church Heirarchy 2000 years ago, despite consequences? Today we have a Church characterized by dissent, division, criticism and intransigence.

If Church leaders and theologians are waiting on the sidelines for a new pope that will align the mission of the Church more closely with Christ's message, it will wait another 50-100 years for such change. We tend to forget that Jesus was not just a polite soul filled with compassion and love; he also knew how to funnel his energies in very demonstrable ways in protest of those in religious authority. Some call this backbone. More current examples of rightious protest for change would include Martin Luther King and Martin Luther (I am not endorsing schism).

There may be more creative ways than a march on Rome to effect change. What we need is leadership. Such leaders will find the majority of the laity standing along side them, and in support of, such efforts for change that have backbone.