One of Us: How a death row inmate changed my outlook on life

One of Us: How a death row inmate changed my outlook on life 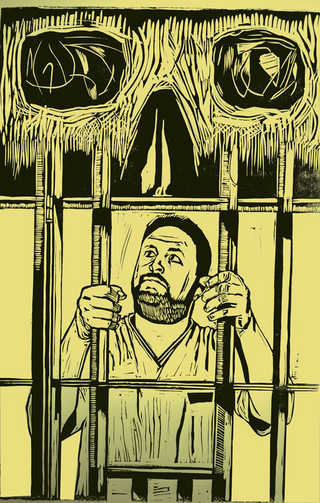 A few months ago, members of the Cherish Life Circle, a group that works to end the death penalty, had gathered to plan an event to mark our 20th anniversary. We sat down and immediately concentrated on practical elements of the celebration. We discussed guest speakers: Kevin Doyle, New York State’s last capital defender, and Helen Prejean, C.S.J., our country’s best-known death penalty opponent. We noted the support of our bishop, Nicholas DiMarzio of Brooklyln. We even secured the place, the Convent of Mercy, and we identified members willing to help with the details of funding and promotion. There was more: concerns about timing and publicity, literature to be distributed, information about our annual service for families of murder victims—the nitty gritty of planning such an event.

Then the phone rang. It was Providence calling to remind us of the why and wherefore of our event, which takes place this month. The voice came from a cell on death row in Terre Haute, Ind.

David first contacted the Cherish Life Circle in December 1998 after reading about our circulation of the Declaration of Life, a document that allows individuals to oppose the death penalty by insisting that, if murdered, they do not want their killer executed.

In the 15 years since he first asked for our prayerful support, David has faced—and been spared from—three execution dates: the first in 1994, the second in 2000, the third in 2004. Today he awaits a date for a new trial. Its timing is uncertain.

What is certain is the transformation in the man once considered “the most dangerous prisoner in Allenwood.” That Pennsylvania prison, far from his native Oklahoma, is where this longtime inmate took the life of a cellmate—a crime he regrets with all his heart and for which he blames only himself—not his childhood spent in poverty and abuse as a son of migrant workers, not the social systems that failed to protect him and not the power of the drugs that twisted his mind.

The year after David first contacted us in Brooklyn, he was transferred to Terre Haute. There he responded to encouragement from his devoted attorney and from a Protestant chaplain, a Sister of Providence from nearby St. Mary of the Woods and this writer.

A few months after our initial meeting, I sent David a small, beautiful autumn leaf from the Weston Priory in Vermont, only to have it returned in a big envelope stamped “UNAUTHORIZED MATERIAL.”

Much of what the prison system does authorize is ugly and dehumanizing. Some inmates are broken by the deprivation; others devise creative ways to compensate for the losses. Some will relieve their desire to have something to care for by capturing and adopting a mouse, as did the prisoner in Stephen King’s The Green Mile and as David did in real life.

Some death row inmates, like David, confined to a single cell, manage to think outside the box. With money sent to him, David has sponsored the schooling of a child in Haiti. He has used his artistic talent to help produce Christmas cards; the profits from their sale aid children in need. In a dozen years over $70,000 has found its way to child-care institutions as near as Indianapolis and as far away as the island of Jamaica.

David got his G.E.D. in prison through television courses, along with several associate degrees. One qualified him as a paralegal. He uses that competence to help death row inmates with their appeals and other legal concerns.

Before his second scheduled execution date, David asked to become a Catholic because, he explained, “In my life those who have been best to me have been Catholics, and I want to die one of you.”

David does his best to live as one of us. His prayer life is deep; his spiritual interests are many. Several years ago, he was accepted as an associate of the Sisters of Providence and is devoted to their foundress, St. Mother Theodore Guerin.

Because David’s life was spared, many have been helped. What he has been allowed is God’s gift of time; the opportunity to choose good over evil, hope instead of despair. Not surprisingly his favorite prayer is that of St. Francis, which includes, “where there is hatred, let me sow love.”

There is no guarantee that anyone so spared would make the choices that have transformed David. But no one has the right to deny another person the opportunity God offers. The mission statement of the Cherish Life Circle affirms its members’ commitment to “strive for a society that refuses to solve its problems by the willful termination of life at any stage by any means.”

Pope John Paul II understood this. He wrote in “The Gospel of Life” (1995), “Modern society has the means of effectively suppressing crime by rendering criminals harmless without definitively denying them the chance to reform.”

And so The Cherish Life Circle is happy to celebrate 20 years of opposing the death penalty that would deprive a person of the chance to reform. And something else has happened to us. We have been changed by what we have learned along the way, by the good people who support our efforts and by David, whose life has touched ours in unexpected ways.

This article also appeared in print, under the headline “One of Us,” in the October 14, 2013, issue.

Camille D’Arienzo, R.S.M., a member of the Mid-Atlantic Community of the Sisters of Mercy of the Americas, is a past president of the Leadership Conference of Women Religious.