Skip to main content
Signs Of the Times
November 4, 2013 issue

‘Nones’ on the Rise Among Hispanics

‘Nones’ on the Rise Among Hispanics 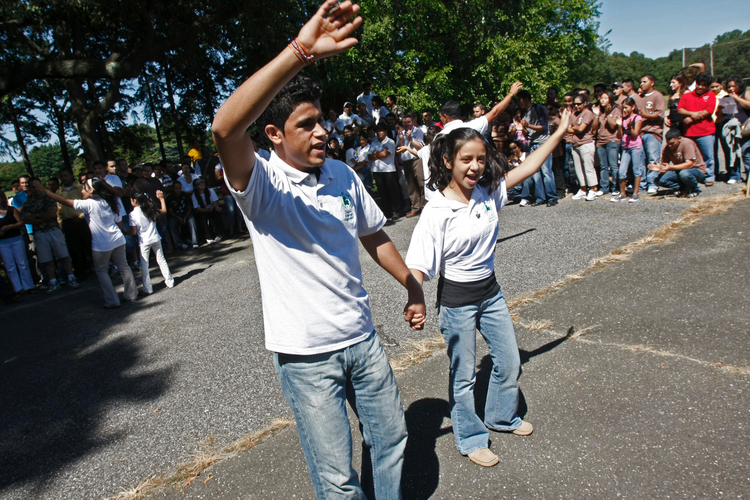 Most U.S. Hispanics identify themselves as Catholic (53 percent); 25 percent identify as Protestant; and few Hispanics (6 percent) identify with a non-Christian religion. But perhaps the fastest growing “religious” demographic among Hispanics, according to a new report from the Public Religion Research Institute, is the religiously unaffiliated—or the “nones” (for “none of the above”), as they are known in other surveys. While the media and academic literature have noted the declining proportion of U.S. Hispanic Catholics, the narrative has often emphasized Catholics converting to evangelical or charismatic forms of Protestantism. The institute’s Hispanic Values Survey of 2013 reveals that this is only half the story. When comparing the religious affiliation of Hispanic adults today with their religious affiliation as children, Catholic affiliation drops by 16 percentage points, but the ranks of both evangelical Protestants and the religiously unaffiliated have grown at roughly equal rates. Evangelical Protestant affiliation has increased by 6 percentage points (from 7 percent to 13 percent), while the percentage of those claiming no religious affiliation has increased by 7 percentage points—from 5 percent to 12 percent.

Show Comments (
2
)
Comments are automatically closed two weeks after an article's initial publication. See our comments policy for more.
Chris NUNEZ
6 years 8 months ago
This should not be surprising. A closer look will show that it's second and third generation Americans of 'Hispanic' origin who are leaving or have left the church. I've pointed this out to my bishop in the distant past. Bilingual, bicultural we no longer 'fit' with the monolingual Spanish-speaking mass-goers, nor are we welcome. And we are not welcome in the English-language mass Catholic population regardless of how well we speak English. Nor are we accepted or recognized as the potential leadership in either of these. Those of us who will never feel comfortable in the Evangelical camp, never feel comfortable outside our Catholic faith we either vote with our feet, or feel like orphans in our own home... Even in the Southwest, the natural historical home of the Latin American Catholic Church.
Robert O'Connell
6 years 8 months ago
There is a protestant church that has a weekly slogan posted in large letters on a sign saying, "Remember what is at the center of our church: UR." I suspect Jesus wants us to know that, but it ain't true unless we do our part.
Advertisement
Advertisement

This article also appeared in print, under the headline “‘Nones’ on the Rise Among Hispanics,” in the November 4, 2013, issue.