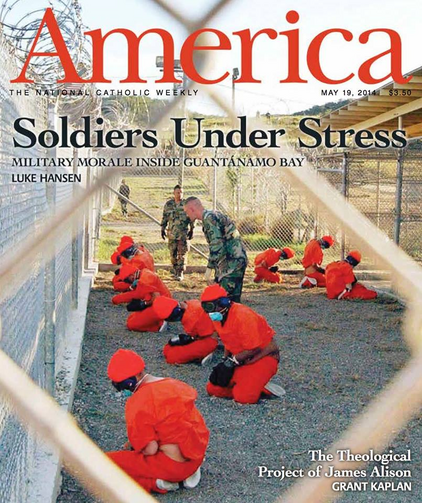 Last summer the Pentagon approved tours of the detention operations in Guantánamo Bay, Cuba, for only a few reporters. America had access from July 15-19, 2013.

Luke Hansen, S.J., an associate editor, toured Camps Five and Six (where most of the detainees are held), the detainee library, food preparation center, hospital and behavioral health unit.

He also interviewed the commander of U.S. Southern Command, the director of public affairs, two chaplains, a defense attorney, the Muslim cultural adviser, members of the guard force, the senior medical officer and the head psychiatrist.

Here is the latest news and commentary from America:

Morality and Morale: The experience of U.S. soldiers inside Guantánamo Bay, Luke Hansen, S.J. (May 19, 2014)

Viewexclusive photos of the detention facilities.

Watch Luke's report on July 18, 2013, from Camp X-Ray, where the first detainees were held in Guantánamo Bay.

Watch several detainees engaged in prayer on July 17, 2013, during Ramadan, in a communal living area in Camp Six.

Other news and commentary from America on the detention camps at Guantánamo Bay, Cuba.

The Rights of Detainees: Prisoners at Guantánamo are entitled to habeas corpus, Brian R. Farrell (Sept. 24, 2007)

In October 2012 America reported live from the military commissions in Guantánamo Bay, Cuba. These are Luke Hansen's daily reflections from the naval base.

A Jesuit in Guantánamo, podcast on Luke Hansen's trip to Guantánamo Bay (Nov. 12, 2012)