Formed in Latin America: Understanding the ecclesiology of Pope Francis 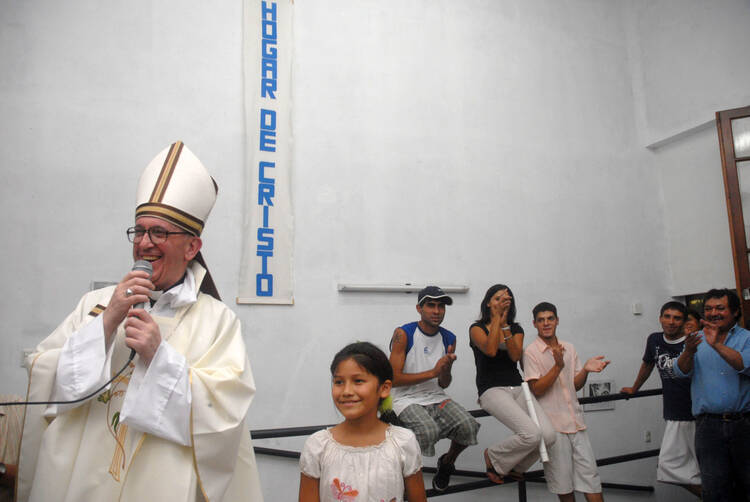 Fifteen months into his pontificate, Pope Francis continues to attract international attention. His gentle, welcoming demeanor and message of mercy and hope have enlivened the faithful and made even the hardest of heart take note. Not surprisingly, many observers try to understand Francis through traditional “conservative” or “liberal” lenses as he highlights a balance between individual moral issues (usually of a sexual nature) and the need to address social or structural sin (usually critical of wealth). But to better understand Pope Francis, we must take seriously his formation in the Latin America church. The church of Latin America is quite different from the Catholic Church of Europe and North America and has its own ecclesial narrative on justice, leadership and collegiality.

The main cathedral in the Archdiocese of San Salvador, El Salvador, provides an interesting contrast in what the people understand the “Catholic Church” to mean.  On the main level is a traditional cathedral constructed in the shape of a cross with large side altars and a main altar some distance away from the front pews. The seat for the archbishop is situated as far back toward the rear wall as possible. Liturgies in the main cathedral tend to be very traditional, with little input or participation from people in the pews.

Underneath this cathedral in the basement is a place of worship referred to as the Romero Chapel. Situated near the tomb of martyred Salvadoran Archbishop Oscar Romero, there is a raised altar in the middle of a circular configuration of simple chairs, which are brought out and set up every Sunday. The archbishop presides over the liturgy above on the main level, while below a different priest from a different part of the country has volunteered to travel to San Salvador to say Mass every Sunday of the year. Upstairs the distance between the archbishop and the people allows for a solemn Mass with very little participation outside of the traditional parameters. Downstairs the homily is usually interactive, with ordinary people standing up and conversing with the priest and each other as the meaning and application of the Gospel is worked out between them. “Participatory” homilies, where multiple parishioners may stand and contribute to the reflection on the readings, are the order of the day.

In many ways, these two churches within one church building represent the two Catholic churches of Latin America. These two understandings of “church” differ significantly in style, mission and substance. (Romero himself moved away from a preoccupation with the institutional church to accompany the popular church in the suffering it endured at the hands of government forces that were committed to preserving the privilege and power of the wealthy few.) These two types of Catholicism, “official” and “popular” have existed side-by-side for centuries. What has occurred in the papacy of Francis, in contrast especially to the papacy of Saint John Paul II, is a move toward the popular church with encouragement and acceptance.

From Vatican II to Medellín

While Vatican II has been recognized as a largely European endeavor, Latin American bishops and theologians had an important, if somewhat muted role toward the end of the council. Scholars such as John O’Malley, S.J., and Robert Pelton, C.S.C., argue convincingly that “Gaudium et spes,” the central pastoral statement of the council, had major input from Latin American bishops. Cardinal Raul Silva and Bishop Manuel Larraín, both of Chile, had numerous contacts with pastoral leaders in Belgium, Germany and France during the council. Later, Silva, Marcus McGrath (Panama), Larraín and theologians from Latin America would focus attention on the widespread poverty that underdeveloped nations faced and the challenges this situation posed for the church. The leadership of the church of Latin America knew that its greatest challenge was the vast majority of poor Catholics who struggled to live a dignified life due to poverty, inequality and oppression.

A mere three years after Vatican II, the Latin American bishops offered a definitive interpretation of the council that was concrete, historical, faithful and progressive. Building upon “Populorum progressio,” (1967) written by Paul VI, the voice of the Latin American church would finally emerge.

The meeting at Medellín was an extraordinary gathering of bishops and theologians that drew heavily upon regional consultations held by various bishops in their dioceses. In these consultations, bishops explored with their people the challenges and opportunities of what being church meant for them.

Four important developments were confirmed at Medellín for the Latin American church. First, the bishops established the relationship between social, political and economic progress in this world and the Kingdom of God for which the church works. Second, there was a call for structural change both in society and the church, to alleviate suffering and promote understanding. Third, the bishops confirmed their self-understanding of church as the people of God, with an explicit option for the poor. Finally, Medellin confirmed that the way in which the church followed its own exhortations would largely determine whether its people would listen to it. Action must accompany new commitments.

Much of the history of Francis and his ministry in Argentina is consistent with the bishop’s meeting at Medellín.

Francis encouraged the immersion of his priests in slums throughout the country, but especially in Buenos Aires. He embraced a “church of the poor” and not simply a church for the poor, which many in North America still do not understand. The church, like the Incarnate Savior it serves, must practice “downward mobility” from prestige and power to loving service in its movement of mercy into the lives of all people. Finally, there is an emphasis on “mercy over judgment,” something made very clear in Francis’ apostolic exhortation, “Evangelii gaudium,” when the image of the church becomes the house of the father of the prodigal son, unconditionally open to anyone who wishes to return.

Nearly all the main themes from Medellín and subsequent bishops conferences in Latin America are played out in one way or another in “Evangelii gaudium.” For example the theme of “action” over “thought” is present when Francis argues that “Ideas—conceptual elaborations—are at the service of communication, understanding, and praxis.”

There is an embrace of a deep and sincere collegiality when he articulates a “trust of the ‘periphery’ (the popular spirituality of the "people of God") as opposed to a centralizing tendency to only trust ‘Rome.’”

Finally, there is a focus on the human aspect of missionary activity and especially its concern for the poor. These emerge again and again in the exhortation as he quotes the Latin American bishops at Medellín (1968), Puebla (1979), Santo Domingo (1992) and finally Aparecida (2007). It is no coincidence that Cardinal Jorge Bergoglio edited and assembled the final documents at Aparecida.

Perhaps the Catholic Church of North America, conditioned as it is by a culture of individualistic meritocracy, has struggled to understand Pope Francis and the direction he is taking the church. The Eucharist is no longer something to be earned; the confessional can no longer be a “torture chamber;” and it is not only the devout who are welcome in our communities but anyone who needs God—which is everyone.

As Francis so beautifully puts it in his exhortation: “I prefer a Church which is bruised, hurting and dirty because it has been out on the streets, rath­er than a Church which is unhealthy from being confined and from clinging to its own security.”

So what might this mean for us, the North America reader? I think it means viewing “faith” as an action and not only as an idea or belief. If you care about the poor and suffering, reach out and encounter them through contact, volunteering, sharing. If you are concerned about immigration reach out to an immigrant, learn Spanish, accompany those without documents. If you are concerned about abortion, offer to house a teenage parent without judgment and walk with her on her path of responsibility, challenge, maybe even shame. Thinking and believing ideals are easy, acting upon them will make us part of that “bruised, hurting and dirty” community that lives out the compassion of Christ.

Show Comments (
2
)
Comments are automatically closed two weeks after an article's initial publication. See our comments policy for more.
Cody Serra
7 years 7 months ago
My faith was born and grew out of this church ecclesiology, with its different national nuances across Latin America rural and cosmopolitan environments. It formed my world view, whose roots remain while adapting to the modern times. "Thinking and believing ideals are easy, acting upon them will make us part of that “bruised, hurting and dirty” community that lives out the compassion of Christ" Rhetorical and theoretical propositions for evangelization are useful when they lead to action for changes in our hearts and minds, and sometimes, for changing some political and economic structures.
Paul Kelly
7 years 7 months ago
Fr. Kelly spoke to me in each word of his article "Understanding the ecclesiology of Pope Francis." For the first time, I put aside my hesitancy about Pope Francis, made super cautious by the recent Popes I thought were poor in both judgment and leadership; they were conservative politicians. Because of this great article, I registered to rejoin our parish Church, St.. Maximilian Kolbe, here in Scarborough, ME, after a long absence. Thank you, Fr. Kelly. Paul Kelly, Saco, ME