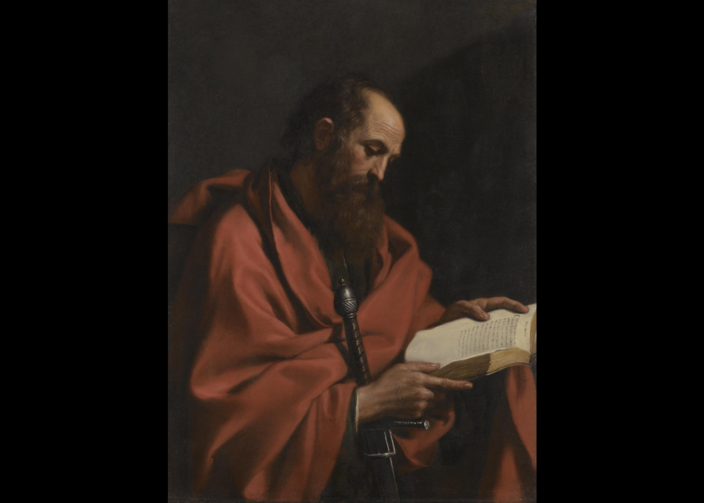 A Reflection for the Feast of the Conversion of St. Paul, Apostle

“On that journey as I drew near to Damascus,
about noon a great light from the sky suddenly shone around me.
I fell to the ground and heard a voice saying to me,
‘Saul, Saul, why are you persecuting me?’
I replied, ‘Who are you, sir?’
And he said to me,
‘I am Jesus the Nazorean whom you are persecuting.’
My companions saw the light
but did not hear the voice of the one who spoke to me.
I asked, ‘What shall I do, sir?’
The Lord answered me, ‘Get up and go into Damascus,
and there you will be told about everything
appointed for you to do.’
Since I could see nothing because of the brightness of that light,
I was led by hand by my companions and entered Damascus.
(Acts 22:6-11)

There is an old parlor trick played by good teachers when it comes to this passage in Acts (or the earlier account of Paul’s conversion in Acts 9:1-22). It is to ask one’s students a simple question: What is the name of Paul’s horse?

The answer: There is no horse. We’ve been so conditioned by famous paintings of the biblical scene of Paul’s conversion from Michelangelo to Caravaggio to Peter Paul Rubens that show him toppling from his steed that we don’t notice the scriptural accounts never mention Paul on horseback. We’ve included the horse into the scene as a kind of religious Mandela Effect, where we remember something that was never there in the telling.

There’s another group in the telling of this story, though, that isn’t often remembered but should be present to our imaginations: the early Christian community that Paul had been persecuting until the day of his conversion. Where are they in this story? It is Paul alone who hears Jesus speaking in both accounts in Acts; when he arrives in Damascus and meets the Christian community there, they have to take his word for it that Jesus appeared to him and called him to conversion.

We learn in Acts that Paul has a reputation for “breathing murderous threats” against Christians, imprisoning them and delivering them to Jerusalem to be punished or killed. We can imagine what the Christian community’s first impulse must have been when their greatest persecutor came before them, blind and weak, to claim that their Lord has chosen him, too, to be an apostle.

We can imagine what the Christian community’s first impulse must have been when their greatest persecutor came before them, blind and weak, to claim that their Lord has chosen him, too, to be an apostle.

Yet the community in Damascus does not exact revenge on Paul. They believe what they have not seen—that somehow Jesus the Lord has chosen the least likely of all people as his instrument. And something more must have happened, something not mentioned in the scriptural text but surely necessary for the future of Paul’s ministry and of the Christian community: At some point they had to forgive him.

We know from elsewhere in Scripture that Paul and his new community did not choose to “go along to get along,” because Paul later argues with Peter (“opposed him to his face,” Paul claims in the Letter to the Galatians) over unclean foods. And we know from Paul’s elevated place among the early communities that he was accepted as a leader and a teacher. That process, as we all know from our own lives, is not an uncomplicated one.

Was the greatest moment of God’s grace in the story of Paul’s conversion not Jesus’ appearance to Paul? Maybe instead it is the moment not mentioned—when those whom Paul treated the worst said “we forgive you” and accepted him into the fold. Hard to imagine; harder to do. But look at the great works that came after.