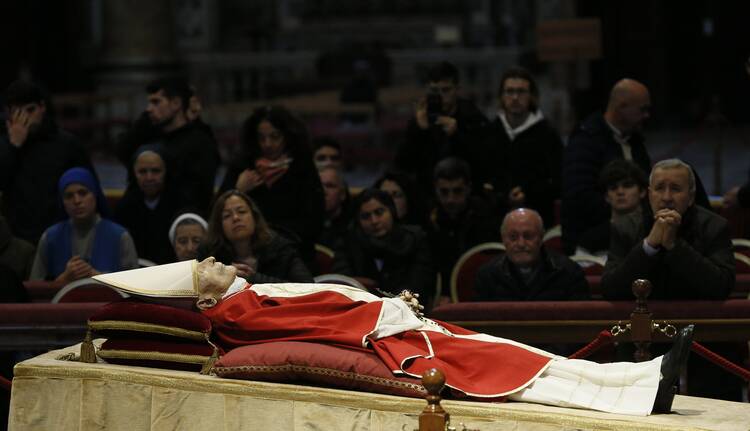 People pay their respects at the body of Pope Benedict XVI in St. Peter's Basilica at the Vatican Jan. 3, 2023. (CNS photo/Paul Haring)

Pope Francis will preside at the requiem Mass and impart the final blessing before the burial of Benedict XVI, his immediate predecessor, at a solemn ceremony marked by simplicity in St. Peter’s Square on the morning of Jan. 5.

The cypress coffin containing the mortal remains of Benedict will be brought from St. Peter’s Basilica onto the steps in front of the church, overlooking St. Peter’s Square, around 9 a.m. (Rome time) accompanied by choir and organ music.

Cardinals from many countries will be seated on one side of the altar, including the cardinals from the United States and Canada in Rome, when Benedict’s coffin is brought out. Most noteworthy among them will be the 90-year-old Chinese cardinal, Joseph Zen Ze-Kiun, who asked the courts in Hong Kong to give him a passport for the funeral. He was given a passport valid for four days to allow him to be present at the funeral of Benedict, with whom he had a close relationship and who gave him the red hat.

Pope Francis will impart the final blessing before the burial of Benedict XVI at a solemn ceremony marked by simplicity in St. Peter’s Square on the morning of Jan. 5.

On the other side of the altar, the only two official delegations—those from Germany (Benedict’s homeland) and Italy (where he had spent 40 years of his life)—will be seated. Germany will be represented by the country’s president, Frank-Walter Steinmeier, its prime minister, Olaf Scholz, and the governor of Bavaria (Benedict’s home state), Markus Söder. Italy will be represented by the country’s president and prime minister, Sergio Mattarella and Giorgia Meloni, respectively.

Several other heads of state will attend the funeral but in a private capacity, including the president and prime ministers of Poland and Hungary and the presidents of Slovenia and Portugal, together with government ministers from Croatia, France and Spain. The former Queen Sofia of Spain and King Philippe of Belgium will also be present. President Joe Biden will be represented by the U.S. ambassador to the Holy See, Joe Donnelly.

Pope Francis will lead a liturgical ceremony that is in essence that of a pope but less formal than that for a pope who has died in office.

Imam Pallavicini will attend the funeral, too, representing the Italian Muslim religious community. He was present when Benedict visited the site of the baptism of Jesus at the River Jordan in 2011.

Pope Francis will lead a liturgical ceremony that is in essence that of a pope but less formal than that for a pope who has died in office. Thus, for example, there will not be the two special prayers of intercession on behalf of the church of Rome and of the Eastern-rite churches for the dead pontiff. Instead, there will be a prayer for the deceased emeritus pope.

For that same reason, when Benedict lay in state in St. Peter’s Basilica over the past three days (Jan. 2-5), where more than 160,000 people paid their respects to him, he was dressed in the red vestments of papal mourning, but he did not have the crozier or the pallium, the symbols of papal office, since he had ceased to be pope on Feb. 28, 2013.

The Vatican has estimated that some 60,000 people will attend Benedict XVI’s funeral on Thursday morning.

At the end of Mass, Pope Francis will impart the final blessing over the coffin of his predecessor, and then pall bearers will carry the coffin from the square to the crypt of St. Peter’s Basilica. Once there, they will inter the coffin in what was once the tomb of John XXIII and later of John Paul II. (The remains of both popes were transferred into the basilica after their respective beatifications.) Benedict had chosen to be buried in this tomb, which was prepared for him for some time ago.

At the public audience in St. Peter’s Basilica on Jan. 4, the eve of the funeral, Pope Francis again spoke about Benedict. He told the large crowd in the audience hall:

I would like us to join with those here beside us who are paying their respects to Benedict XVI, and to turn my thoughts to him, a great master of catechesis. His acute and gentle thought was not self-referential, but ecclesial, because he always wanted to accompany us in the encounter with Jesus. Jesus, crucified and risen, the living one and the Lord, was the destination to which Pope Benedict led us, taking us by the hand. May he help us rediscover in Christ the joy of believing and the hope of living.

The Vatican has estimated that some 60,000 people will attend Benedict XVI’s funeral on Thursday morning. Since he was no longer pope, it will not be an official day of mourning in the Vatican City-State, but its yellow and white flags will be flown at half-staff.

The Italian government has decreed that flags will be flown at half-staff as a sign of respect for the late pontiff, who spent 40 years of his long life in this country, a land and people that he loved.

Throughout Germany the bells of churches will toll at 11 a.m. (local time) on Thursday morning, around the time that this eighth German pope in the history of the church will be laid to rest at St. Peter’s.

One thousand journalists from 30 countries have received accreditation to report on the funeral of the deceased pope, which will be presided over within days of his death by his successor, an event that appears to be without precedent in the history of the church.

Today’s funeral is significantly different from what happened in February 1802, when Pius VII presided over the funeral of his predecessor, Pius VI, in St. Peter’s Basilica. Pius VI had died in exile in France in August 1799; his funeral ceremony and burial in exile took place the following year. His body was later exhumed and brought to Rome, where Pius VII presided over a second funeral rite in the basilica in 1802.