Pope Francis isn’t slowing down in 2023 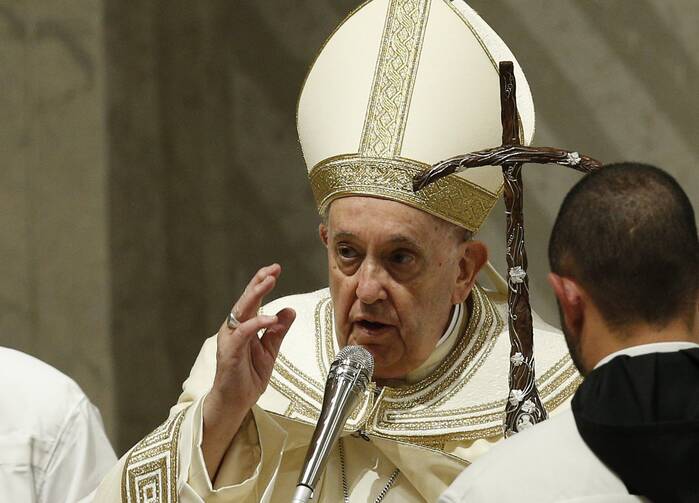 On Jan. 5, Pope Francis will preside at the requiem Mass and funeral ceremony of his predecessor, Pope Benedict XVI. The last time a pope did this was in 1802 when Pius VII celebrated a second funeral for Pius VI, whose body was exhumed and returned to the Vatican after his death and burial in exile three years prior.

On March 13, he will enter the 11th year of his pontificate. At the age of 86, he is already the third oldest pope to lead the church in the last 800 years, but he shows no signs of slowing down in terms of his agenda, notwithstanding problems of mobility due to ailments in his right knee.

His agenda appears daunting even for a younger man, but, as he has said on more than one occasion, “one governs from the head, not from the knee.” He is otherwise in good health and good spirits and has stated, in more than one interview over the past six months, that the thought of resignation has not entered his head.

For the first time since his election almost 10 years ago, there will be no emeritus pope in the church. It will mark the beginning of a new era for the Francis pontificate according to a cardinal who is close to him. Quite what impact that could have on Francis and on his decision making in the coming years remains to be seen.

Pope Francis will write a new page in the history of the church on Jan. 5 when he presides at the requiem Mass and funeral ceremony of his predecessor.

What follows are some of the major events in Francis’ agenda that are likely to occur over the next 12 months. Francis, of course, could surprise us in more ways than one.

Pope Francis has come to see visiting other countries as an important part of his effort at evangelization, promoting interfaith dialogue and fostering peace in the world. He is the second-most-traveled pope in history after John Paul II, having already made 39 foreign trips and visited 58 countries as pope. He plans to travel even more in 2023, depending on his physical mobility.

He is scheduled to set out on his 40th foreign journey on Jan. 31 when he makes his fifth visit to the African continent. He will travel first to the Democratic Republic of Congo—the country with the largest Catholic population in Africa—and from there fly to South Sudan, from Feb. 3 to Feb. 5. He will be the first pope to visit South Sudan, a country that only gained its independence in 2011.

Originally scheduled for July 2022, the Africa visit had to be postponed because of Francis’ problem with his right knee. The visit to South Sudan will be an “ecumenical pilgrimage of peace,” and he will be joined by the Archbishop of Canterbury, Justin Welby; and the moderator of the Church of Scotland, Iain Greenshields. Because of the security situation in both countries, Francis will only be able to visit their respective capital cities, Kinshasa and Juba.

There are several other foreign trips penciled in on his diary for 2023, but a senior Vatican source told America that which, if any, of these he will make depends on how well he fares on the African visit. If that trip goes without any major hitch related to mobility, he could then travel to other countries during the year.

His agenda appears daunting even for a younger man, but, as he has said on more than one occasion, “one governs from the head, not from the knee.”

Indeed, Francis could visit any one or even all of the following countries in 2023: Hungary (in the first part of the year); Lebanon (depending on the formation of a government there); Marseilles, France (a one-day visit to meet the bishops from port cities of the Mediterranean that are destinations for migrants); and Lisbon, Portugal, for World Youth Day (Aug. 5 and 6). A visit to Ukraine is still on his agenda, but that is more complicated because of political, logistical and security reasons.

On Oct. 30, 2021, India’s Prime Minister Narendra Modi visited Francis in the Vatican and invited him to visit his country. It was envisaged that this could happen in early 2023, but since then the Indian government has not yet taken the necessary steps to make it happen. On the other hand, the Mongolian authorities and church have invited Francis to visit Mongolia, and the country’s first cardinal, Giorgio Marengo, told La Croix that Francis “has accepted the offer.”

Synodality is a central plank of Francis’ pontificate; he sees it as the path to a major reform and conversion of the whole church. He launched the synodal process in October 2021, a journey on which the whole church will reflect on the theme “Towards a Synodal Church: Communion, Participation, Mission.” The first phase of the process began at the diocesan and national levels in countries worldwide. The second phase, at the continental level, will take place in the first quarter of 2023. The third phase will open in the Vatican on Oct. 4, 2023, with the first of the two synodal assemblies: cardinals, bishops and other members of the people of God, from all countries of the world will attend, as will Francis. The second synodal assembly is scheduled to take place at the Vatican in October 2024 on the eve of the Holy Year.

By the end of December 2023, the number of cardinal electors, that is, cardinals under the age of 80 with a right to vote in a conclave, will have decreased to 114, of whom only 44 will be European and 13 Italian. (Compare this to the 2013 conclave where 60 of the 115 electors were European and 28 Italian.)

Before that consistory he will already have created 79 of the 114 electors. With the new batch, more than two-thirds of the electors in a future conclave will have been created by him.

This means that Pope Francis could make a new batch of cardinals, at least 6 but probably many more, perhaps at the end of November.

Before that consistory he will already have created 79 of the 114 electors. With the new batch, more than two-thirds of the electors in a future conclave will have been created by him.

No fewer than seven Vatican officials in senior positions of responsibility have surpassed the official age of retirement, which is 75. Some of them are widely expected to be replaced in the first half of 2023, thus allowing Francis to continue reshaping the Roman Curia to reflect more fully his vision of a synodal church.

Among those most likely to be replaced in the coming months are the Spanish cardinal Luis Ladaria Ferrer, prefect of the Dicastery for the Doctrine of the Faith, who will celebrate his 79th birthday in April, the Canadian cardinal Marc Ouellet, the prefect of the Dicastery for Bishops who will turn 79 in June, and the Italian cardinal Mauro Piacenza, the major penitentiary, who will be 79 in September. Given the nature of these three offices, Francis will almost certainly appoint clerics as prefects to all of them.

The four other cardinal prefects who are over the age of 75 are expected to retain their positions for at least one more year, but when he decides to replace them he could opt for lay persons in one or more of those positions of responsibility.

At another level, Pope Francis will continue renewing the episcopate in countries around the world, including the United States and Canada, as diocesan bishops turn 75, and that too could change the face of the church in significant ways.

Francis is unlikely to slow down this year. He is expected to continue to hold public audiences on Wednesdays throughout 2023, as well as group or private audiences each week. He will likely continue to give interviews to representatives of the Italian and international media and to hold airborne press conferences on return journeys from foreign visits. In addition to all this, he will continue his practice of meeting individuals in the afternoons, encounters that seldom if ever are made known to the public. Indeed, his private agenda can often be more crowded than his public one. And he will continue to use the phone to communicate directly with people.

Correction (Jan. 4, 2023): An earlier version of this report misstated that Pope Francis would be the first pontiff to preside over the funeral Mass of his predecessor.