Thousands pay their final respects to Benedict XVI as his body lies in state in St. Peter's Basilica 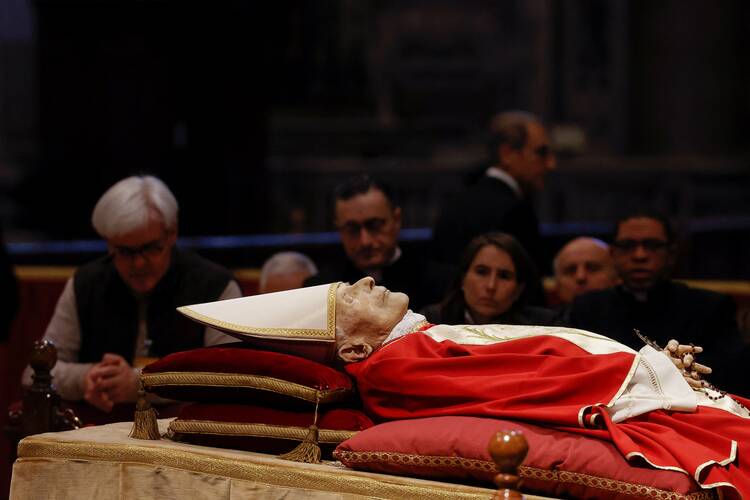 Tens of thousands of Romans, pilgrims and tourists filed past the body of Benedict XVI, the emeritus pope that was lying in state in St Peter’s Basilica Jan. 2. They came to pay their final respects to the eighth German pope who had led the Catholic Church from April 19, 2005, to Feb. 28, 2013.

The body was brought from the Mater Ecclesiae Monastery—situated in the Vatican Gardens behind St. Peter’s where Benedict lived soon after his resignation—to the basilica at 7 a.m. this morning. It was placed on a catafalque in front of the high altar that stands over the tomb of St. Peter. Then preparations were made for the faithful to come and view. His body will remain lying in state until the evening of Jan. 4.

Two Swiss Guards—the personal bodyguards of the pope—stood on either side of the body as a mark of respect, it seems at the wish of Pope Francis. They had stood guard for Benedict until 8 p.m. on Feb. 28, 2013, when his resignation took effect. But there was no other element of papal insignia beside the mortal remains of the former pope. He was dressed in red vestments, the liturgical robes of a bishop, and wore a miter, as former bishop of Rome.

There were kneelers on either side of the catafalque, and the first to kneel and pray there were the members of his household at the monastery—Archbishop Georg Gänswein, four consecrated women of Memores Domini community and the medics who cared for him. Next came the president of Italy, Sergio Mattarella, and the Italian prime minister, Georgia Meloni. After that, the public arrived, and the press were also given a special entry. When I visited, the German Cardinal Walter Kasper and the former president of the Italian bishops conference, Cardinal Camillo Ruini, were praying beside the catafalque.

People queued for around two hours in St. Peter’s Square and the Via della Conciliazione (the main road leading into the square), on this cold day with gray skies, to view the body and say a silent prayer. They had to go through several security checks before they were allowed to enter the basilica, and once inside they were told by Vatican ushers not to stop so as to give others a chance to visit.

It seems that the mourning for Benedict took place around the time of his resignation, not today.

There was not the air of sadness that pervaded those who paid their last respects to John Paul II when he died. It seems that the mourning for Benedict took place around the time of his resignation, not today. I remember seeing many people weep at midday on the Sunday in February when he appeared at the papal study window of the Apostolic Palace for the last time. I remember the powerful, raw emotions too that accompanied him as he left the Vatican by helicopter for Castel Gandolfo on the afternoon of Feb. 28. But today I did not see such an outpouring of emotion.

Although the situation may change over the next two days, there was no indication that the crowds would be anything like those that came to pay their respects to John Paul II in April 2005. On that occasion, one of my nieces queued for 24 hours to get into the basilica. Today, I met a group of tourists from Louisiana and New York in St Peter’s Square who told me they thought two hours was too long to wait to enter the basilica. A couple of Irish tourists told me the same. The Vatican Gendarmerie reported that 64,000 people had filed past the body between 9 a.m. and 7 p.m. today.

Vatican journalists estimated that perhaps as many as 80 percent of those going to pay their last respects were tourists, mostly Italians but also from many other countries, who happened to be in Rome for the holiday season which in Italy lasts until Jan. 6.

Among the international tourists who entered the basilica and walked past Benedict’s body were two young male engineering students rom Taiwan—Yu-Chī Shīh and Meng-Yu Līn. They are studying in Germany on an exchange program and told me they had decided to come to Rome to visit the Vatican because “it is one of only 14 states that has diplomatic relations with Taiwan today.” They are not Christian, they said, but they had heard of Benedict’s death and said they were “overcome with heavy emotion” as they entered the basilica and walked past the former pope’s body. “We have never seen anything like this before,” Mr. Shīh said. They were also greatly impressed by the architecture of the basilica. “It is so unreal.” They were unaware that Benedict XVI had written an important letter to Chinese Catholics in May 2007 but said they would now read it.

The Vatican Gendarmerie reported that 64,000 people had filed past the body between 9 a.m. and 7 p.m. today.

Kevin and Gabriel from Puerto Rico, both aged 25, said they had learned of Benedict’s death as they boarded the plane from London to Rome. They decided to visit the Vatican and after a 90-minute wait this morning they entered the basilica and could walk in front of the body of “the retired and good pope.” They said they remembered “the great impact his abdication made, and how it had opened the door for the election of a Latin American pope.”

Paul Raphael, a young Nigerian member of the Missionaries of Charity, told me that when he saw Benedict lying in state, “I was led to introspection. I thought to myself that here is the pope who was once the leader of the church, and I said one day I will be like him, in that condition.”

Elena, a young Italian woman, said she felt “really, really emotional” when she walked past the body of Benedict. Her friend Raffaela, an Italian architect, admitted that she was “not particularly attached” to the German pope but “as a believer, I think every pope has a special role, an important function, since he has been chosen by God. Francis is serving the church in this historic moment. Benedict served in a much different moment, and in a different way as the church has many aspects. Benedict loved Christ very much. So, I came to say farewell.”

Because Benedict was not pope when he died at the age of 95 on Dec. 31, the funeral service will not be the formal one that is reserved to a pope who dies in office. It will be solemn, but “marked by simplicity” as Benedict expressly wished. The Vatican has not invited any heads of state to participate except for the president of Germany, Frank-Walter Steinmeier, since Benedict was German, and the president of Italy, Sergio Mattarella. These are the only official delegations. Some other heads of state have made known that they will come, but in a private capacity, including the King of Belgium and the presidents of Poland and Portugal. Most of the 182 states that have diplomatic relations with the Holy See will be represented by their ambassadors. Many cardinals will attend the funeral too, but not all because of distance and the short notice.

The funeral will take place in St Peter’s Square on Thursday morning, Jan. 5, at 9.30 a.m. History will be made then because the former pope’s successor, Pope Francis, will preside over the funeral—something that appears not to have happened ever before in the history of the church.