Consistency and order might seem like boring qualities. But they were the reasons I loved Pope Benedict. 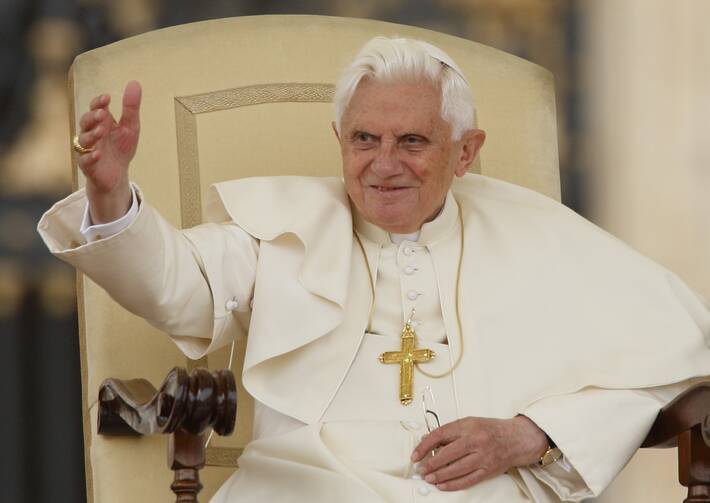 I was in grade school for the entirety of Pope Benedict XVI’s papacy and thus was blissfully unaware of church politics and knew little about the Vatican other than the pope’s name. Still, I ended up with a deep appreciation for the holy father because of the love my mother had for him.

My mom has a huge influence in my life, and she is definitely my best friend. She and my father taught me to value the things they value (and qualities in them I admire): being logical, rule-abiding, sensible. These may be somewhat boring qualities for a 22-year-old, but seeing those same qualities in Benedict are also what made me and my mom love him so much. He explained the church and its teachings in a straightforward and logical way, and even though that doesn’t usually inspire the warm fuzzies, it is something for which we will always remember him.

Pope Benedict explained and defended the Catholic Church in a clear and rational way, but he always did this with love, a love that is demonstrated in his first encyclical, “Deus Caritas Est.” Even though the rules of our church may seem stifling to a lot of people, through Benedict’s guidance, I have been able to see the ways in which they are outward signs of God’s love. Parents make a rule for their child that she is not allowed to touch a hot stove, not out of desire to curb her free will, but out of love and care for her.

Benedict’s strong defense of the church’s teachings are proclaimed with that same desire for our wellbeing. Although he was known as “God’s Rottweiler” to many, Pope Benedict still managed to show the loving side of God. And his life and writings for the church show this: that one can be a staunch defender of order in the church’s teaching while still respecting God’s infinite love and mercy.

In “Deus Caritas Est” he wrote, “Love is the light—and in the end, the only light—that can always illuminate a world grown dim and give us the courage needed to keep living and working. Love is possible, and we are able to practice it because we are created in the image of God. To experience love and in this way to cause the light of God to enter into the world—this is the invitation I would like to extend with the present Encyclical.”

As the prefect of the Congregation (now Dicastery) for the Doctrine of the Faith for 25 years before he became pope, then-Cardinal Ratzinger wrote extensively on church doctrine, affirming teachings and upholding the rules of the church. The specifics of these are not as important to me as the consistency and order that he put into his work.

Benedict also spent six years as the president of the Commission for Drafting the Catechism of the Catholic Church. I was not yet born when the Catechism was promulgated in 1992, and so only recently realized how new the text was (the official English version came out in 1997!). But while its words might be new, the sources from which the teachings are drawn are ancient and many. It is an apt example of then-Cardinal Ratzinger’s expansive knowledge and intellectual ability that he was able to oversee the synthesis of 2,000 years of church history and teaching into a relatively short book.

The Catechism is easily my favorite text unique to our church, and I have been known to quote catechetical paragraphs with some frequency. It all makes so much sense—a practical and orderly way to understand the what and why of the faith.

Benedict’s strong defense of the church’s teachings are proclaimed with that same desire for our wellbeing.

My mom was able to see Pope Benedict when he came to Washington, D.C., in 2008. She loved him before this, and even more afterward. She explained that after a papal Mass, as thousands of people made their way onto the Metro, anti-Catholic protesters lined the streets, shouting that the pope was the anti-Christ and that Catholics were going to hell. Instead of arguing with the protesters, the throng of people began to sing the hymn that had concluded the Mass.

This experience, she said, reinforced her desire to follow Pope Benedict’s call for us to embrace both faith and reason. The protesters were on the fanatical side of sola fide—and faith without reason can lead people there. Reason without faith leads to the opposite problem of relativism, which Benedict fought so strongly against. Pope Benedict taught us to use faith and reason together so that we might better explain church teaching, dialogue with other Christians, and to show God’s love for all people.

In his spiritual testament, bringing his thoughts from his papacy and his life together, Benedict wrote, “I have seen, and see, how, out of the tangle of hypotheses, the reasonableness of faith has emerged and is emerging anew.” He will be remembered for the way that both reason and faith factored into his understanding of the church.