Hope, disappointment and the future tense 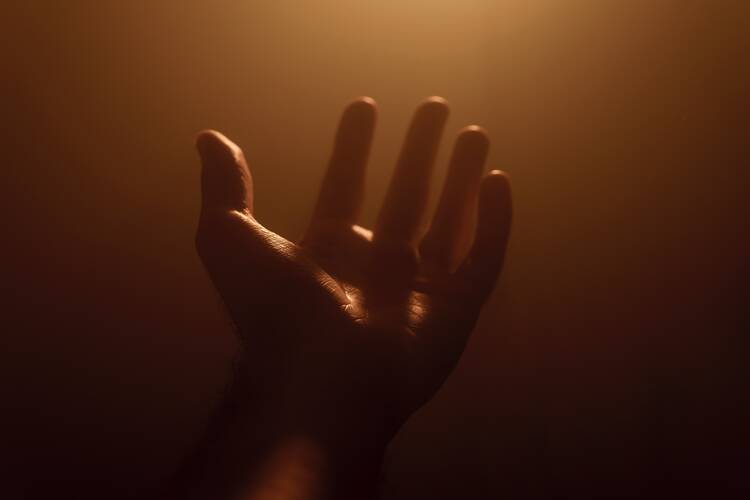 A Reflection for the Second Sunday of Advent

O God, with your judgment endow the king, and with your justice, the king's son; he shall govern your people with justice and your afflicted ones with judgment.
Justice shall flower in his days, and profound peace, till the moon be no more. May he rule from sea to sea, and from the river to the ends of the earth.
For he shall rescue the poor when he cries out, and the afflicted when he has no one to help him. He shall have pity for the lowly and the poor; the lives of the poor he shall save.
May his name be blessed forever; as long as the sun his name shall remain. In him shall all the tribes of the earth be blessed; all the nations shall proclaim his happiness. (Ps 72:1-2, 7-8, 12-13, 17)

If you are of a certain age and temperament, you might have spent some of the 1990s listening to Counting Crows, a band Rolling Stone put on the cover in January 1994 while calling them “The Biggest New Band in America.” In 1996, the band released a beautiful song with these haunting opening lines: “A long December, and there’s reason to believe/ Maybe this year will be better than the last.” The narrator of that song has seen a few things, and both the tune and the lyrics suggest his or her belief in the future is more of a hope than a promise.

The tone is not altogether different from that we hear in today’s Scripture readings, not just from the Psalm verses above but from Isaiah and from the Gospel of Matthew. We encounter prophecies and hopes for the future that make it clear that the present situation of the narrators and audiences are fairly miserable ones. The future tense predominates throughout, and Scripture scholars will tell you there are good reasons why.

Isaiah writes at a time in which the Davidic dynasty of Israel has been destroyed—literally, cut off at the stump—and the people have been turned once again into exiles. Christians use this reading because we see Isaiah’s longing for a future king who brings justice and peace to the world—even to the Gentiles—as a prophecy of the coming of Jesus. For his Israelite audience at the time and after, however, it would have sounded like a much more basic (and perhaps cynical) cry for help: Give us a king, any king, who is strong, who is just, who will fear the Lord, who will end the cycles of violence.

Advent says to still believe that Jesus is coming. He will be nothing like what you expect, but he will fulfill your hope.

And in today’s Gospel verses from Matthew, we encounter John the Baptist in full throat, denouncing not just sinners, and not just Pharisees and Sadducees, but indeed anyone who would imagine themselves because of their station or lineage to be free “from the coming wrath.” Time’s up, John says, and if you think you might need to repent now, wait until you experience the judgment of the one who comes after me. His denunciations of his peers in Israel for hypocrisy and for fruitlessness and his vivid depictions of their future destruction make it clear that he, too, is speaking to an audience undergoing turmoil and facing great injustice. Both Isaiah and John the Baptist look at the world they live in and don’t find much joy; both look to the future and hope for a different world.

That is us, too, is it not? Even those of us who do not face injustice as starkly as others recognize that the world around us is in turmoil and suffering, that it is a world where it can be difficult to be optimistic. And combined with our own faults and failings, it can be difficult to see the light through the darkness. A long December starts to seem like a long year.

Advent says no: Advent says to still believe that Jesus is coming. He will be nothing like what you expect, but he will fulfill your hope. The Jesus who did come to Judea was, I suspect, a terrible disappointment to John the Baptist at first, eating with sinners and tax collectors, just as he was a disappointment to those who imagined an earthly king. But a savior who simply sets the wicked on fire, who simply conquers his (our?) enemies, is just a bigger wolf, a crueler lion, a more powerful Assyrian king. Every cycle of violence or injustice or sin or suffering is just perpetuated. Nothing changes. Next year will be no better than the last.

What we pray for in Advent, what we hope for in our lives and for the world is for the return of Jesus who taught us that all that would end.

Get to know James T. Keane, Senior Editor at America

Not an all-time favorite but a recent one, David Sedaris’s essay collection Holidays on Ice was a gift I received a few years ago and now always laugh with. When I was in my late teens, I worked during summers and school breaks at Mervyn’s, a mid-level department store. At Christmastime, the store’s music soundtrack included only eight songs; this meant that over the course of a full-day shift selling shoes, I would hear Alvin & The Chipmunks sing “The Chipmunk Song (Christmas Don’t Be Late)” sixteen different times. Worse, the songs always played in the same sequence, so you knew it was coming even before it started. The sort of existential dread that causes is well captured in Sedaris’s “Santaland Diaries.”

I have been lucky over the past few years to know a number of the priests who have done the yearly blessing of the Christmas Crèche at the Old Town Bar & Restaurant in New York City. (It is being held this weekend this year: Kevin Spinale, S.J., our Catholic Book Club moderator, is doing the honors.) Going to that yearly celebration and seeing a lot of old school New York literary types is always a lot of fun. Also, there’s a lot of talk about who died that year, which is the Irish sports page.

What project are you most proud to have worked on this year at America?

I have been a Los Angeles Dodgers fan all my life, and their play-by-play announcer for almost seven decades until his retirement in 2016 was Vin Scully—a man whose voice is as familiar to most Angelenos as that of a close friend or relative. When he died on Aug. 2, 2022, I wrote a tribute to him that allowed me both to pay homage to a great man and to take a long trip down memory lane. I still remember Vin’s final words at his retirement ceremony, which I used to end the article: “Don’t be sad that it’s over. Smile because it happened.”

I’m going to be honest here and admit I’ve never cooked anything for Christmas except prime rib, and then my job was mostly to make sure I didn’t overcook it and I didn’t cut my fingers off with the ancient Keane family electric carving knife. Last year I did employ one culinary trick I learned over the years: Use powdered mustard and olive oil for the crust instead of the usual avalanche of salt. No one needs more salt.

Future historians will be able to pinpoint the year of this photo rather easily (Also, R.I.P. Kinko’s, we hardly knew ye): 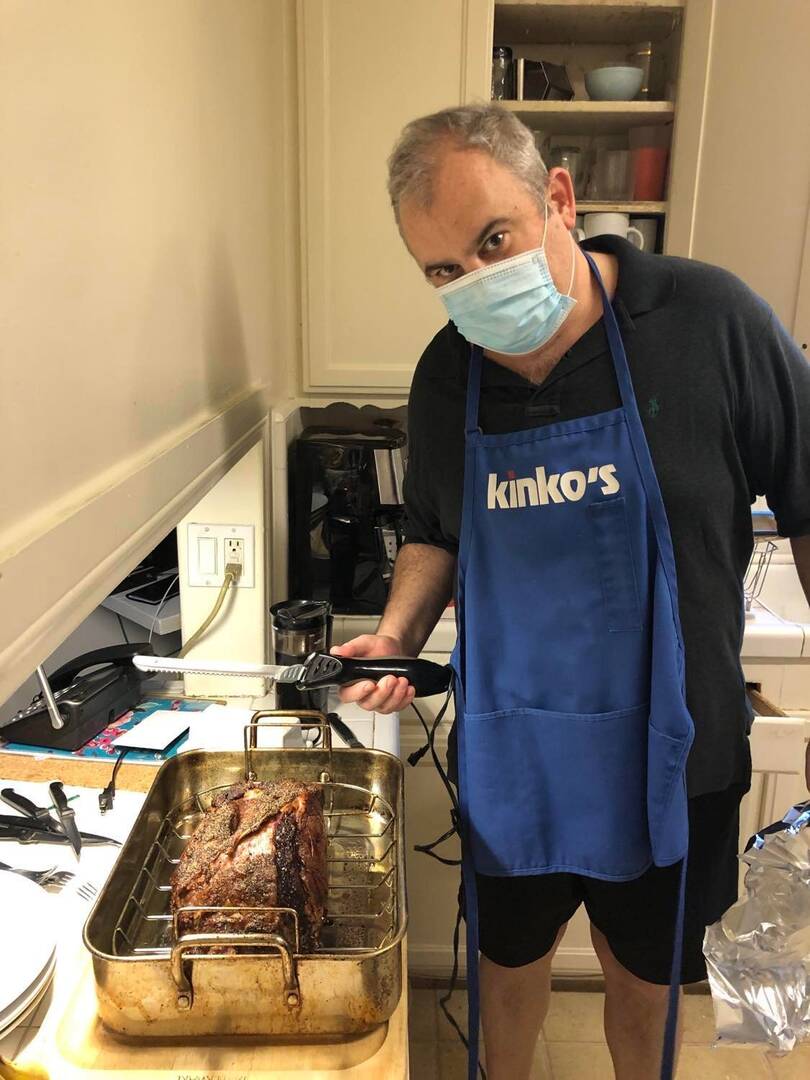 This was a few years before my brother Mike was born, so it shows my parents and their first seven kids in their house in Burbank, Calif. Note the astonishing energy of Dad’s yellow turtleneck. Hard to pinpoint the exact year, though I am wearing a Lawrence McCutcheon Rams jersey, so let’s say 1978. 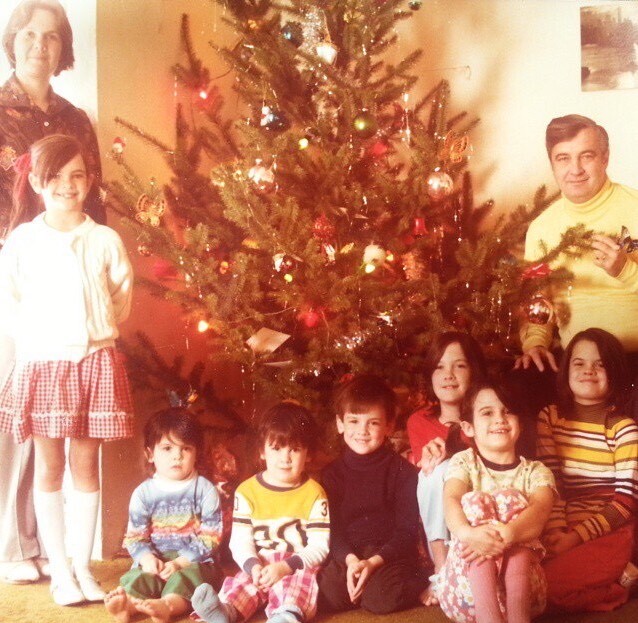