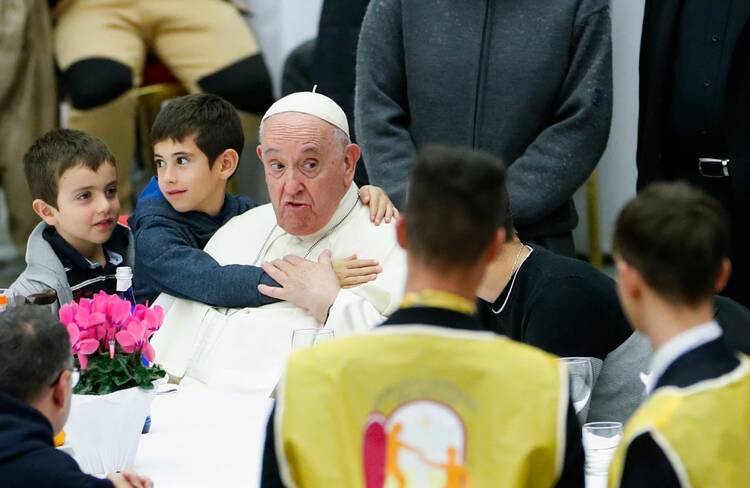 Pope Francis joins some 1,300 guests for lunch in the Vatican audience hall on the World Day of the Poor Nov. 13, 2022. (CNS photo/Remo Casilli, Reuters)

In 2015, Pope Francis addressed the United Nations about global poverty, a cause that would come to define his papacy. “To enable these real men and women to escape from extreme poverty, we must allow them to be dignified agents of their own destiny,” he said. “Integral human development and the full exercise of human dignity cannot be imposed.”

Pope Francis called for both material and spiritual support of the world’s poor, meeting people’s survival needs while empowering them to become leaders and changemakers. The seven areas that Francis called the world to improve on—access to the material demands of food, water, shelter and employment, as well as the spiritual demands of education, civil liberties and religious freedom—caught the attention of Henry Schwalbenberg, director of Fordham University’s International Political Economy and Development.

Together with his students, he asked: How is the world doing on those seven fronts?

“What we did is get together to figure out how we can measure this and aggregate it, and [we came] up with a measurement of human well-being,” Mr. Schwalbenberg told America.

Overall, 26 percent of the world population lives in poverty, according to the index.

Thus began the Fordham Francis Index, now in its sixth year of comprehensively documenting material and spiritual poverty around the world. Mr. Schwalbenberg and his team this year recorded the highest poverty score since the study began: Overall, 26 percent of the world population lives in poverty, according to the index.

Increased rates of malnourishment, greater discrimination against women and widening restrictions on religious freedom have contributed to a higher rate of material and spiritual poverty worldwide.

The F.F.I. for 2022 was released on Nov. 11 during a United Nations event marking the World Day of the Poor, which Pope Francis designated for the 33rd Sunday of Ordinary Time. This year the day fell on Nov. 13.

The index reflects an assessment of data collected between 2019 and 2021 from various U.N. agencies and nongovernmental organizations.

Discrimination against women rose in 2021, according to data collected from the World Economic Forum. Using the sex ratio at birth and the gender gap in healthy life expectancy, the data showed that an estimated 51 percent of women in the surveyed countries faced discrimination, according to the report.

Meanwhile, in 2019, 59 percent of people—nearly 4.5 billion—lived in countries “where religious freedom is severely restricted,” the report said.

According to the index:

The U.N.’s Human Development Index uses certain measurements that show poverty on a scale and in relation to other countries: life expectancy at birth, years of schooling and gross national income per capita. In contrast, the measures for poverty in the Fordham Francis Index look at easy-to-understand, gross measurements, Mr. Schwalbenberg said. For example, where the H.D.I. uses a country’s income per capita to determine overall poverty, the F.F.I. simply tracks the number of people making less than $3.20 a day.

“[The H.D.I. was] looking at number of years completed at school,” he added. “Our measure of education, or lack of education, is illiteracy. So [we’re] really trying to look at the people on the margin.”

The highest material poverty scores occurred in small, low-income states, while the spike in spiritual poverty has been sharpest in more developed countries with large populations like China, India and Russia.

“Lack of religious freedom is concentrated in East Asia and the Asian continent,” said Fordham graduate student Khutso Segooa. She said that religious suppression in the region has remained high since 2017.

When asked how the world should respond to this data, Mr. Schwalbenberg said, “We identified four areas that got worse”—unemployment, food insecurity, religious freedom and gender equity. Some of those problem areas will be easy to respond to, he said; others will require more significant interventions.

Unemployment skyrocketed during the Covid-19 pandemic, according to the index. Mr. Schwalbenberg expects those numbers to be lower next year as the global economy continues its post-pandemic recovery, but some nations experienced significant economic damage during the downturn.

“This is the moment for us not to lose heart but to renew our initial motivation. The work we have begun needs to be brought to completion with the same sense of responsibility.”

Religious freedom and gender equity were affected by choices made by politicians and government leaders. Now that democracy itself appears endangered around the world, the vibrancy of civil liberties remain closely tied to the presence of authoritarian or populist governments, Mr. Schwalbenberg said.

“There is some kind of tension going on between those countries that believe in those kinds of freedoms and those that don’t. Maybe that’s a more fundamental issue that’s going on around the globe, and we’re just reflecting it in those two numbers,” Mr. Schwalbenberg said.

Archbishop Gabriele Caccia, the Vatican’s permanent observer to the United Nations, and Bill O’Keefe, executive vice president for mission, mobilization and advocacy for Catholic Relief Services, also spoke at the announcement of the latest Index. Mr. O’Keefe described the disheartening impact of climate change on the relief and development work sponsored worldwide by C.R.S.

“It’s up to us,” Mr. O’Keefe said. “We have to care for creation and care for the poor and make sure those two ‘cares’ enter into our politics and our economy.”

And just over seven years after his first address to the United Nations, Pope Francis had this to say on 2022’s World Day of the Poor: “This is the moment for us not to lose heart but to renew our initial motivation. The work we have begun needs to be brought to completion with the same sense of responsibility.”

Christopher Parker is an O’Hare Fellow at America. His work has been featured in Notre Dame Magazine, Arches Magazine, the Los Angeles Times and the Berkshire Eagle.