Do you have a favorite psalm? Today’s is mine. 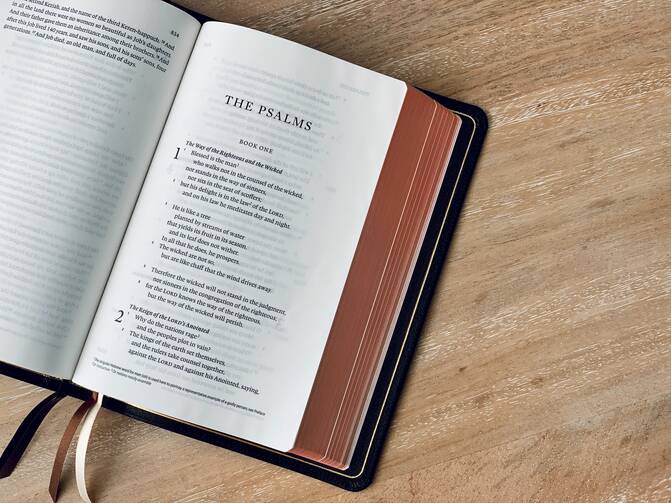 Reflection for Monday of the Thirty-Third Week in Ordinary Time

Blessed the man who follows not
the counsel of the wicked
Nor walks in the way of sinners,
nor sits in the company of the insolent,
But delights in the law of the Lord
and meditates on his law day and night. (Ps 1:1)

Today’s psalm is my favorite. Of all the psalms, it’s probably a pretty basic one to love—the first! Whenever I hear it, I am transported back to grade school daily Mass, sitting with my classmates, listening to the Irishman who always did the Thursday readings at Mass. (This psalm seems to occur way more often on Thursdays than any other day, though I have no evidence to back me up on that.) Go ahead and read this line in a strong Irish accent: “Not so, the wicked, not so! They are like chaff which the wind drives away!” If you were wondering, chaff is the dry casing of wheat or corn that is thrown out or burnt instead of eaten.

The first psalm begins: “Blessed the man who follows not the council of the wicked.”

It’s basic, it’s simple, it’s the idea behind countless biblical teachings, just in short psalm form. Don’t listen to the evil one, or follow what sinners do, or “sit in the company of the insolent”—follow the laws God has taught us, and remember them. A pretty simple command!

The difficult part is getting out of the ruts we’re all in, where we continue sinning or following the wayward paths of others just because they’re easier.

The next verses of the psalm continue with the same idea: The person who follows God’s will is blessed, will “prosper” like the tree planted near running water. John, who writes the first reading, says something very similar to the readers of Revelation when he says, “Blessed is the one who reads aloud / and blessed are those who listen to this prophetic message / and heed what is written in it.” And in the Gospel, the blind man is on the same page; his faith in God has saved him.

These are ideas we hear seemingly every day in the readings. We all know we should be acting like the person who is blessed, not in the way of the wicked. Often that way looks more enticing, though—others are doing it, they seem fine; it’s easier to continue in our vices; they are more satisfying in the here and now. But as we’re told over and over, the Lord watches over the way of the just, and the way of the wicked vanishes.

There’s something necessary about this teaching that bears such repeating, so it should be repeated: Follow the way of the just, the way of God, the way that will last forever. The difficult part is getting out of the ruts we’re all in, where we continue sinning or following the wayward paths of others just because they’re easier.