Pope Francis on Bahrain: Why did I visit a small, Muslim country? Three words: dialogue, encounter and journey. 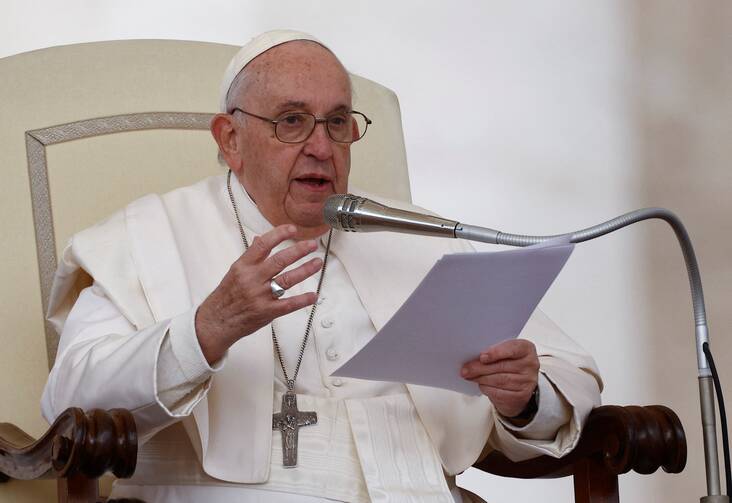 Below is the text of Pope Francis’ weekly Wednesday audience, delivered on Nov. 9, 2022.

Before beginning to speak about what I have prepared, I would like to draw attention to these two children who have come up here. They did not ask permission. They did not say, “I am afraid”. They came up directly. This is how we need to be with God: direct. They have given us an example of how we need to behave with God, with the Lord: go ahead! He is always waiting for us. It was good for me to see the trust of these two children. It was an example for all of us. This is how we always need to draw near the Lord—freely. Thank you.

Three days ago, I returned from my trip to the Kingdom of Bahrain which I truly knew nothing about. I did know really know what that kingdom is like. I would like to thank everyone who accompanied this visit through the support of their prayers, and to renew my gratitude to His Majesty the King, the other Authorities, the local Church and the people, for their warm welcome. And I would also like to thank those who organize these journeys. To do this there is a movement of people, the Secretary of State works a lot to prepare the discourses, to prepare the logistics, everything, there is a lot of movement…then the translators…and then, the corps of the Gendarmeria, the corps of the Swiss Guards who are wonderful…. Everything. It is a tremendous amount of work! To everyone, to all of you, I would like to thank you publicly for all that you did so that the Pope’s journey would go well. Thank you.

Several times, I heard the desire emerge that encounters between Christians and Muslims increase, that they form stronger relationships, that this be taken more to heart.

It comes spontaneous to ask why the Pope wanted to visit this small country with such a large Islamic majority? There are so many Christian countries—why not go first to one or two of them? I would like to respond through three words: dialogue, encounter and journey.

Dialogue: the opportunity for the long-desired Journey was afforded by the invitation of the King to a Forum on dialogue between the East and the West, a dialogue that seeks to discover the richness that other peoples, traditions and beliefs possess. Bahrain, an archipelago formed by many islands, helps us understand that it is not necessary to live by isolating ourselves, but by coming closer. In Bahrain, which is made up of islands, they came close, didn’t they, they brush up against each other. The cause of peace necessitates this, and dialogue is “the oxygen of peace”. Don’t forget this. Dialogue is “the oxygen of peace”. Even for peace in our homes, right? If there is war there between husband and wife, with dialogue they can move ahead in peace. In the family, dialogue, for peace is preserved through dialogue.

Almost sixty years ago, the Second Vatican Council, speaking about building an edifice of peace, stated that “it certainly demands that [men and women] extend their thoughts and their spirit beyond the confines of their own nation, that they put aside national selfishness and ambition to dominate other nations, and that they nourish a profound reverence for the whole of humanity, which is already making its way so laboriously toward greater unity” (Gaudium et spes, 82). This is what the Council says. I sensed this need in Bahrain and I hoped that religious and civil leaders throughout the world might be able to look beyond their own borders, their own communities, to care for the whole.

This is the only way to confront certain universal issues, for example, that God is being forgotten, the tragedy of hunger, the care of creation, peace. These things can be thought of all together. In this sense, the Forum for dialogue entitled: “East and West for Human Coexistence”—this was the title, “East and West for Human Coexistence”—encouraged the choice of the path of encounter and the rejection of confrontation. How much we need this! There is such a need to encounter each other. I have in mind the insanity of war—insane—of which battered Ukraine is a victim, and of many other conflicts, that will never be resolved through the infantile logic of artillery, but only with the gentle power of dialogue. But in addition to Ukraine, which is being tormented, this land. But let’s think of the wars that last for years, and let’s think of Syria—more than 10 years!—let’s think, for example, of Syria, let’s think of the children in Yemen, let’s think of Myanmar: all over the place! Right now, Ukraine is closer. And what does war do? It destroys, it destroys humanity, destroys everything. Conflicts are not to be resolved through war.

Dialogue, encounter, and journey in Bahrain also took place among Christians. For example, the first encounter was ecumenical.

But there can be no dialogue without the second word—encounter. The first word—dialogue. The second word—encounter. We met each other in Bahrain. Several times, I heard the desire emerge that encounters between Christians and Muslims increase, that they form stronger relationships, that this be taken more to heart. As is customary in the Orient, in Bahrain, people place their hand on their heart when they greet someone. I did this too, to make room inside me for the person I was meeting. For without this welcome, dialogue remains empty, seeming, it remains on the level of an idea rather than reality.

Among the many meetings, I recall the one with my dear Brother, the Grand Imam of Al-Azhar—my dear brother—and the one with the young people at Sacred Heart School, students who gave us a huge example: Christians and Muslims studying together. Young people, boys and girls, children need to get to know each other so that fraternal encounter might prevent ideological divisions. And now I would like to thank Sacred Heart School; I thank Sister Rosalyn who has developed this school so well, and the children who participated with their discourses, through prayer, dance, song—I remember it all well! Thank you so much! But even the elderly offered a witness of fraternal wisdom. I recall the meeting with the Muslim Council of Elders, an international organization formed a few years ago that promotes good relationships between Islamic communities under the banner of respect, moderation and peace, opposing fundamentalism and violence.

Thus we move toward the third word: journey. The journey to Bahrain should not be seen as an isolated episode. It was part of a process initiated by Saint John Paul II when he traveled to Morocco. So, the first visit of a Pope in Bahrain represents a new step on the journey between Christian and Muslim believers—not to confuse things or water down the faith, no. Dialogue does not water down, but creates fraternal alliances in the name of our Father Abraham, who was a pilgrim on earth under the merciful gaze of the one God of Heaven, the God of peace. This is why the motto of the journey was: “Peace on earth to people of goodwill”. And why do I saw that dialogue does not water down? Because in order to dialogue you need to have your own identity. If you do not have your own identity, you cannot dialogue because you do not even understand who you are. For a dialogue to be good, it always has to be rooted in one’s own identity, to be aware of your own identity, and from there dialogue can take place.

Dialogue does not water down, but creates fraternal alliances in the name of our Father Abraham, who was a pilgrim on earth under the merciful gaze of the one God of Heaven, the God of peace.

Dialogue, encounter, and journey in Bahrain also took place among Christians. For example, the first encounter was ecumenical, a prayer for peace with the dear Patriarch and Brother Bartholomew, and with brothers and sisters of various confessions and rites. It took place in the Cathedral dedicated to Our Lady of Arabia, whose structure resembles a tent, where, according to the Bible God would meet with Moses in the desert along the journey. The brothers and sisters in the faith, whom I met in Bahrain, truly live “on a journey”. For the most part, they are immigrant laborers who, far from home, discover their roots in the People of God and their family within the larger family of the Church. It’s wonderful to see these migrants—from the Philippines, from India and from other places—Christians who gather and support each other in the faith. And they move ahead joyfully, in the certainty that the hope of God does not disappoint (cf. Rm 5:5). Meeting the Pastors, the consecrated men and women, the pastoral workers, and in the festive and moving Mass celebrated in the stadium with so many members of the faithful who came from other Gulf nations as well, I brought them the affection of the entire Church. This was the journey.

And today I would like to transmit to you their genuine, simple and beautiful joy. Meeting each other and praying together, we felt we were of one heart and one soul. Thinking about their journey, their daily experience of dialogue, let us all feel called to expand our horizons—open hearts, please! Not closed, hard hearts. Open your hearts because we are all brothers and sisters and so that this human fraternity might move ahead. Broaden your horizon, be open, expand your interests and let’s dedicate ourselves to knowing about others. If you dedicate yourself to knowing about others, you will never be threatened. But if you are afraid of others, you will be threatened. Each and every person is needed in order for the journey of fraternity and peace to progress. I can give my hand, but if there is no hand from the other side, it doesn’t do anything. May Our Lady help us on this journey! Thank you!