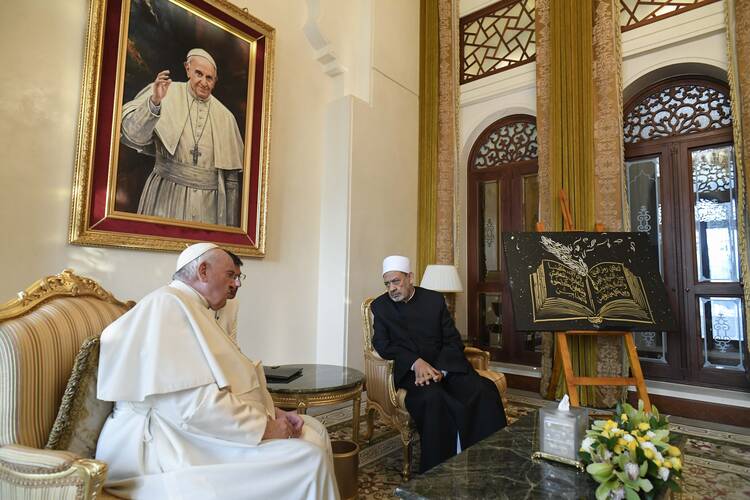 SAKHIR, Bahrain (AP) — With Russia’s war in Ukraine raging, Pope Francis joined Muslim, Christian and Jewish leaders on Friday in calling for the great religions to work together for peace, telling an interfaith summit that religion must never be used to justify violence and that faith leaders must oppose the “childlike” whims of the powerful to make war.

On his second day in the Gulf Arab kingdom of Bahrain, Francis closed out a conference on East-West dialogue sponsored by King Hamad bin Isa Al Khalifa and then met separately with Muslim leaders at the royal mosque.

It was his second such conference in as many months, following one in Kazakhstan, evidence of Francis’ core belief that moments of encounter among people of different faiths can help heal today’s conflicts and promote a more just and sustainable world.

“We appear to be witnessing a dramatic and childlike scenario: in the garden of humanity, instead of cultivating our surroundings, we are playing instead with fire, missiles and bombs.”

Sitting around him in the Sakhir royal palace grounds were leading Muslim imams, the spiritual leader of the world’s Orthodox Christians and U.S. rabbis who have long engaged in interfaith dialogue. Speaker after speaker called for an end to Russia’s war in Ukraine and the start of peace negotiations. The Russian Orthodox Church, which sent an envoy to the conference, has strongly supported the Kremlin in its war and justified it on religious grounds.

Francis told the gathering that, while the world seems to be heading apart like two opposing seas, the mere presence of religious leaders together was evidence that they “intend to set sail on the same waters, choosing the route of encounter rather than that of confrontation.”

“It is a striking paradox that, while the majority of the world’s population is united in facing the same difficulties, suffering from grave food, ecological and pandemic crises, as well as an increasingly scandalous global injustice, a few potentates are caught up in a resolute struggle for partisan interests,” he said.

“We appear to be witnessing a dramatic and childlike scenario: in the garden of humanity, instead of cultivating our surroundings, we are playing instead with fire, missiles and bombs, weapons that bring sorrow and death, covering our common home with ashes and hatred,” he said.

King Hamad, for his part, urged a coherent effort to stop Russia’s war in Ukraine and promote peace negotiations, “for the good of all of humanity.”

The visit is Francis’ second to a Gulf Arab country, following his 2019 landmark trip to Abu Dhabi, where he signed a document promoting Catholic-Muslim fraternity with a leading Sunni cleric, Sheikh Ahmed al-Tayeb. Al-Tayeb is the grand imam of Al-Azhar, the seat of Sunni learning in Cairo, and has become Francis’ key partner in promoting greater Christian-Muslim understanding to promote peace and fight climate change.

Al-Tayeb joined Francis in Bahrain and was on hand last month in Kazakhstan, too. In his prepared remarks, he called Friday for an end to Russia’s war “to spare the lives of innocents who have no hand in this violent tragedy.”

Al-Tayeb also called for Sunni and Shiite Muslims to engage in a similar process of dialogue to try to heal their centuries of division, and added that Al-Azhar was prepared to host such an encounter. The Sunni-Shiite split within Islam is rooted in the question of who should succeed the Prophet Muhammad after his death in 632.

“Let us together chase away any talk of hate, provocation and excommunication and set aside ancient and modern conflict in all its forms and with all its negative offshoots,” he said. Bahrain is ruled by a Sunni monarchy that has been accused by human rights groups of systematic discrimination against its Shiite majority, charges the government rejects.

Later Friday, al-Tayeb met privately with Francis, who praised his opening to Shiites. “Today you were very courageous when you spoke about dialogue within Islam” the pope said.

They both then presided over a meeting at the royal mosque between the Vatican delegation and the Muslim Council of Elders, which began with a young boy chanting verses from the Quran and a young Christian girl reading a Bible verse. As some 20 outdoor air conditioners chilled the mosque’s courtyard, both Vatican and Muslim speakers listed environmental concerns and climate change as a primary concern for humanity.

Francis opened his visit to Bahrain on Thursday by urging Bahrain authorities renounce the death penalty and ensure basic human rights are guaranteed for all citizens.

Francis was also bring his message of dialogue to Bahrain’s Christian leaders by presiding over an ecumenical meeting and peace prayer at the Our Lady of Arabia Cathedral, the largest Catholic Church in the Gulf, which was inaugurated last year on land gifted to the church by Al Khalifa.

Francis opened his visit to Bahrain on Thursday by urging Bahrain authorities renounce the death penalty and ensure basic human rights are guaranteed for all citizens. It was a nod to Bahraini Shiite dissidents who say they have been harassed and detained, subject to torture and “sham trials,” with some stripped of their citizenship or sentenced to death for their political activities. The government denies discriminating against Shiites.

Francis raised the citizenship issue in his remarks Friday, albeit in general terms, stressing the need for countries to “establish in our societies the concept of full citizenship” and reject terms like minorities.

Francis, though, also aimed to highlight Bahrain’ tradition of religious tolerance: Unlike neighboring Saudi Arabia, where Christians cannot openly practice their faith, Bahrain is home to several Christian communities as well as a small Jewish community.

In his prepared remarks to the forum, U.S. Rabbi Marc Schneier, who has long worked to promote Jewish-Muslim understanding and serves as Al Khalifa’s special advisor on interfaith matters, praised Bahrain as a “role model in the Arab world for coexistence and tolerance of different faith communities.”

As the pope visited, activists shared video of a protest Friday south of Bahrain’s capital, Manama, ahead of the island’s parliamentary elections. The demonstrators waved banners calling on the public to boycott the vote. They shared an image of riot police being on hand, watching the protesters.