The patron saint of those who greet us at the door 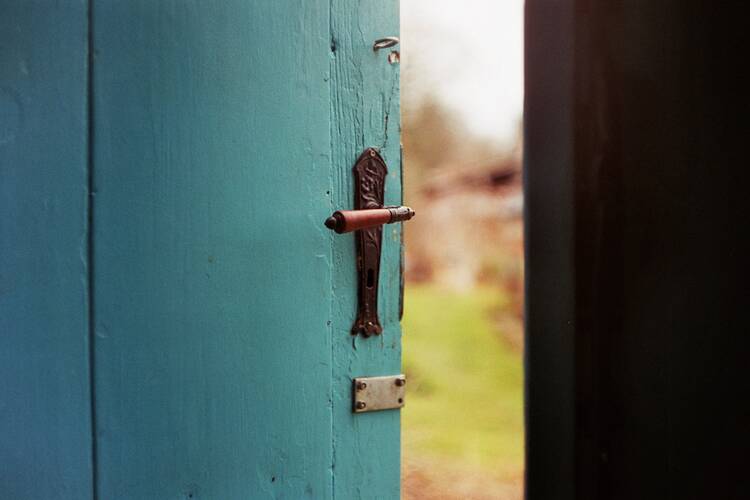 Each time that I leave my Jesuit community, I pass by three men and a woman who serve as security and reception for Xavier High School. The men are all former police officers, a fact they wear very lightly. Always ready with a smile and a friendly word, they seem to spend their days mostly helping people get where they need to go and watching out for the students. Early in the morning you can find them not just at the entrance but down the block at the subway station, making sure our kids get to school okay.

Meanwhile, the woman who sits behind the front desk misses nothing that is going on at Xavier. She reminds me of so many amazing office assistants I have had the privilege of knowing in the Society, people who always know exactly what is going on in our institutions and communities, and also what to do about it. They’re trusted by Jesuits and others as advisers, friends, even confessors. They often provide a better welcome to our works than we Jesuits do. If you’ve ever had occasion to call or visit America Media, you’ve seen this for yourself. Glenda Castro has been with the organization for going on 30 years, and no one is wiser or more helpful.

To stand at the door is to be allowed to greet the world, to stand in the position of God, who welcomes us all with kindness and mercy (even when we’re kind of a mess).

Whether we’re going to the doctor’s office, a bar or out our front door, all our lives are touched by interactions with people whose job is at least in part to “work the door.” And in the life of the church, today we celebrate a man who I like to think of as their patron saint, Jesuit brother Alphonsus Rodríguez. Rodríguez was not your average Jesuit; he entered at 40 years old, after having been married and a father to three kids. His life with them was sadly like something out of the book of Job; each of his loved ones died in quick succession. Then his business failed, too.

But rather than breaking him, those losses somehow brought Rodríguez to a greater faith in God. He decided to pursue religious life.

Six months after he entered the Jesuits, Rodríguez was asked to become the porter at a recently founded Jesuit college (i.e., high school) in Majorca. He stayed in that job for 46 years, and he became an institution. People would come to him for help or counseling, including other Jesuits. And he treated each person with enormous respect. In memoirs discovered after his death, Rodríguez wrote that each time the doorbell rang, he would imagine that it was God on the other side waiting to be let in. “I’m on my way, Lord!” he would say as he went to greet whoever he met there.

Within the Jesuits, reflections about Rodríguez have often centered around his humility. He took a job that others (read: priests and educated people) would not want and made it something special. Personally, I think if he could, he would correct that. To stand at the door is to be allowed to greet the world, to stand in the position of God, who welcomes us all with kindness and mercy (even when we’re kind of a mess). What a privilege to be that person. And what a gift those who have that job are to others.