Borders are our lines, not God’s. 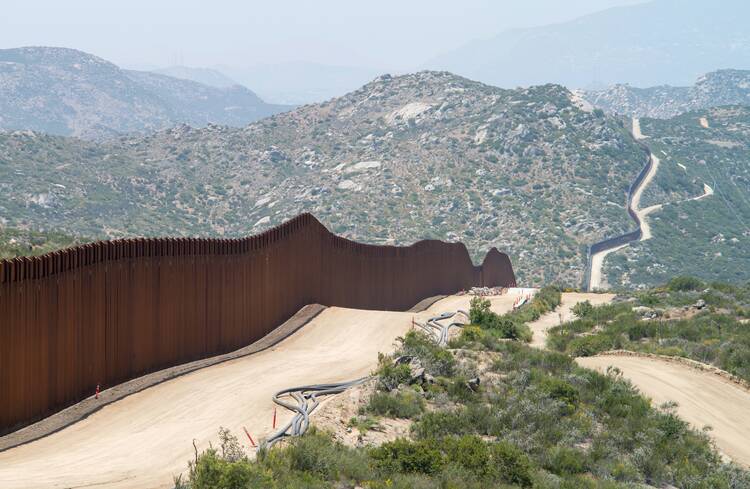 A Reflection for the Twenty-eighth Sunday in Ordinary Time

I was a child, not yet in school, when I first saw the red dirt of Oklahoma. Driving across what my father proclaimed to be “the state line,” he told us kids to look at Oklahoma’s iron-infused red dirt.

We had gone to visit distant relatives, and it was my first time out of Kansas. I remember because when we later first visited farming cousins in eastern Colorado, my father again announced that we had crossed a state line. I protested. “But the dirt looks like Kansas!”

“What do you mean the dirt looks like Kansas? This is Colorado.”

It might have been my mother, who stepped in to explain that state boundaries were not drawn in dirt. No, they are much more arbitrary than that.

I still marvel at the enthusiasm that greets a driver crossing from western Kansas into eastern Colorado. “Welcome to Colorful Colorado,” says the solitary roadside sign pinned onto a plate of uninterrupted prairie. If you do not know that, after almost two more hours of driving, the Rockies will come into view, you will wonder at the audacity of human-made boundaries.

Nonetheless, we draw them; we even kill for them. And they do matter. The limpest lie a liberal tells is that lines are never necessary. Life really is quite different in territory claimed, if not controlled, by the likes of Vladimir Putin. And conservatives kid themselves in thinking that, once a line has been drawn, moral reasoning can simply rest.

The Gospel gently laughs at all this, at the lines we draw.

Either way, one can see some sense in Naaman announcing in today’s first reading that, if it was the God of Israel who had healed him, he would carry home the land’s very soil so that he could worship properly in the future.

The Gospel gently laughs at all this, at the lines we draw. When only a Samaritan returns to give thanks to the God of Israel, Jesus asks,

“Ten were cleansed, were they not?

Where are the other nine?

Has none but this foreigner returned to give thanks to God?”

Then he said to him, “Stand up and go;

Dividing lines do matter. We cannot help but draw them, but the Gospel wants us to know that they are our lines, not God’s. They are a consequence of sin’s entrance in the world: “Our resources are here. Yours are there.” “Life is better on this side of the border.”

Lines drawn on a map do not limit our lives like those that we draw in our hearts.

But lines drawn on a map do not limit our lives like those that we draw in our hearts. “This is what should have happened. What you didn’t do.” “If you lived differently, you could live with me, but you don’t.”

The Gospel insists that “the word of God is not chained” (2 Tim 2:9), but we prefer to say, “If your values were different, we would not have made you distant.” The nature of all aggression, personal and political, passive and direct, is this: To achieve some good, we are willing to perpetrate evil.

It is not a question of declaring wrong to be right. We must acknowledge and struggle against real injustice, but we must not seal off our hearts from others. Closing the self to others is a fruit of sin. The God revealed on the cross of Christ has his arms open. That’s who God is: “the repairer of the breach” (Is 58:12). And the Trinity, revealed by our Lord, knows distinction between its persons, but only for the purpose of love.

Naaman wants to carry home dirt. And we are all too willing to divide it. But on the cross of Christ, a different truth is pinned into the earth.

He was pierced for our sins,

crushed for our iniquity.

He bore the punishment that makes us whole,