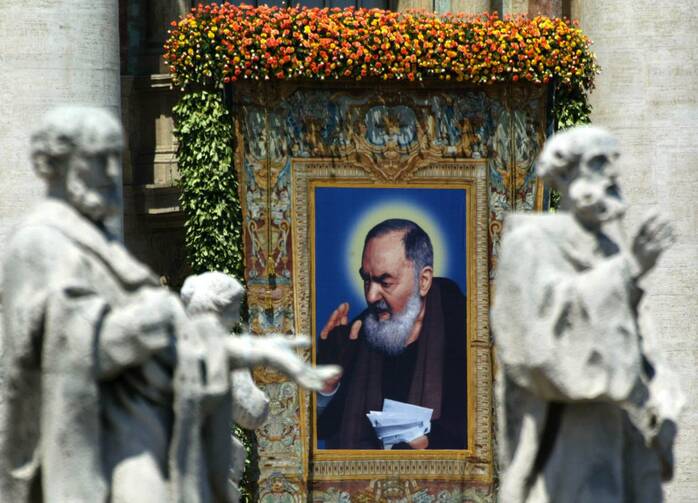 A tapestry depicting Padre Pio hangs from the central balcony on the facade of St. Peter's Basilica during his canonization ceremony June 16. (CNS photo from Reuters) (June 17, 2002) See PADREPIO-CANONIZE June 17, 2002.

A Reflection for the Feast of St. Padre Pio

He said, “The Son of Man must suffer greatly
and be rejected by the elders, the chief priests, and the scribes,
and be killed and on the third day be raised.” (Lk 9:22)

Today is the feast of St. Pius of Pietrelcina, better known as Padre Pio. He is one of the most well-known saints of the 20th century. His ability as a confessor is well-known, as he is said to have the power to read souls. Among his other God-given gifts were bilocation, healing and the stigmata.

But all that’s only if you ask the people who believe it. According to many others, he was a fraud, faking his wounds with carbolic acid and having sex with women in the confessional regularly. Even among devoted Catholics, we have some who say his life was true, while others swear he was a hoax. I count myself among the former, but I find I’m usually more likely to believe in strange Catholic phenomena than others.

Nevertheless, the church celebrates the feast of Padre Pio today—and if you’re worried about his stigmata or other preternatural experiences being the reason for his canonization, have no (or at least less) fear: They weren’t taken into account when his sanctity was being considered. His canonization was based solely on miracles that are attributed to him post-mortem, just like any other saint. (His intercession healed an Italian woman in the 1990s and a young boy in 2000.)

No matter what you might believe about Padre Pio’s miracles during his lifetime, he offers an example to all of us for perseverance through great suffering, physically, mentally and socially.

During his lifetime, he suffered from the stigmata, the wounds of Jesus inexplicably appearing on his body. This caused him extreme pain at all times. And on top of that, he was prevented from celebrating Mass or seeing the public because the Vatican feared his influence on people. That hesitation about him has continued even to this day, though his support outweighed the mistrust eventually.

The life and experience of Padre Pio so clearly bring me back to today’s Gospel reading, in which Jesus says he must suffer and be rejected before he is eventually raised. Now, Padre Pio isn’t Jesus, nor the second coming, but simply another saint. However, his experience of the stigmata for decades of his life, paired with the rejection by church leaders including even the pope, reminds me quite clearly of the way Jesus (and St. Joan of Arc, among others) suffered without approval from the elders of their time.

No matter what you might believe about Padre Pio’s miracles during his lifetime, he offers an example to all of us for perseverance through great suffering, physically, mentally and socially. And we can take a cue from him in terms of facing rejection by society in whatever form that might be, through humble actions and belief in what is right.