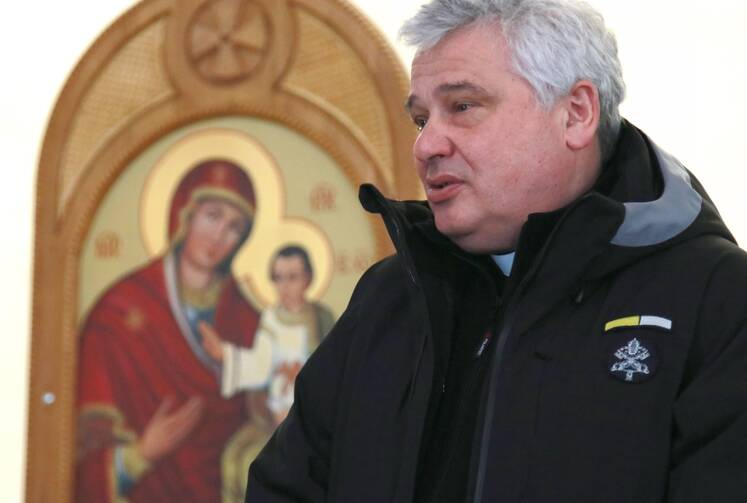 Cardinal Konrad Krajewski, the papal almoner, is pictured near a Marian icon during a visit with Ukrainian refugees in Lviv, Ukraine, on March 10, 2022. (CNS photo/courtesy Ukrainian Catholic Church)

Cardinal Konrad Krajewski, whom Pope Francis sent to Ukraine at the beginning of September to show his “closeness” to the Ukrainian people and to bring humanitarian aid, came under fire near the Ukrainian city of Zaporizhzhia today along with others who were with him. “He emerged unscathed and is continuing his mission,” Vatican News reported. Cardinal Krajewski told the Italian daily, Corriere della Sera, that he had gone into war zones to bring aid to people in need, “zones where only soldiers entered. Then the shooting started.”

Cardinal Krajewski had gone into the war zones to bring aid to people in need, “zones where only soldiers entered. Then the shooting started.”

The Polish cardinal, who is the prefect of the Vatican Dicastery for the Service of Charity, has been sent to Ukraine four times by the pope since Russia invaded the country on Feb. 24. As the papal almoner, he is responsible for performing works of mercy on behalf of the pope. He said Pope Francis had called him during the meeting of cardinals in Rome at the end of August and said to him, “It would be good if you could go again to Ukraine, to the war zones, to visit and bring aid to those communities that are still there after almost 200 days of war.”

The Polish cardinal had driven more than 2,000 miles from the Vatican in a minibus to deliver humanitarian aid. He went first to the southern port city of Odesa, and then to the southeastern city of Zaporizhzhia and the surrounding area; his next planned destination was Kharkiv, in an area which Ukrainians forces have recaptured from the Russians in recent days.

Cardinal Krajewski: “I am now safe and well. I am in Kharkiv, a city that has been most bombed. Here tears are lacking. Words are lacking. One can only pray.”

Cardinal Krajewski, speaking by phone to Vatican News, said that with the help of a Catholic bishop, a Protestant bishop and a Ukrainian soldier, he had loaded his minibus with provisions and set out for an area that “no one besides soldiers enter anymore” because of the threat of attack. His goal was to bring supplies of food and other aid to the people trapped in this no-man’s-land, he said. But as they headed for a zone controlled by Russian soldiers, Cardinal Krajewski and those with him came under fire from light weapons, and their minibus was hit by bullets. He and his companions ran for cover, not knowing what would happen next, the Vatican said.

“For the first time in my life, I didn’t know where to run… because it’s not enough to run. You have to know where to go,” the cardinal told Vatican News. He and those with him “escaped the incident unscathed” and went on to deliver the food and other aid. He also handed out rosaries blessed by Pope Francis.

The Russian invasion of Ukraine has now lasted more than 200 days. The conflict has brought death and destruction to this nation of 41 million people, more than a quarter of whom have been forced to become refugees in other countries or are internally displaced in their homeland.

Cardinal Krajewski told Corriere della Sera, “I am now safe and well. I am in Kharkiv, a city that has been most bombed. Here tears are lacking. Words are lacking. One can only pray.”

Sept 17 also happened to be “a very special day” for him, he told Vatican News, “because it has been nine years since the Holy Father chose me as the Papal Almoner and on this day I was ordained a bishop.” After this most recent incident, Cardinal Krajewski told Vatican News that he reiterated his belief that “we can only pray and repeat: ‘Jesus, I trust in you.’”

@gerryorome
Provide feedback on this article
Join the conversation: Login or create an account
Before you can comment, you need to update your profile to include your first and last name, as required in our comments policy. Then reload this page and you'll be set up for commenting. Update your profile
Show Comments ()
Login to comment.