Miracles should fill us with wonder and awe. Then they should inspire us to action. 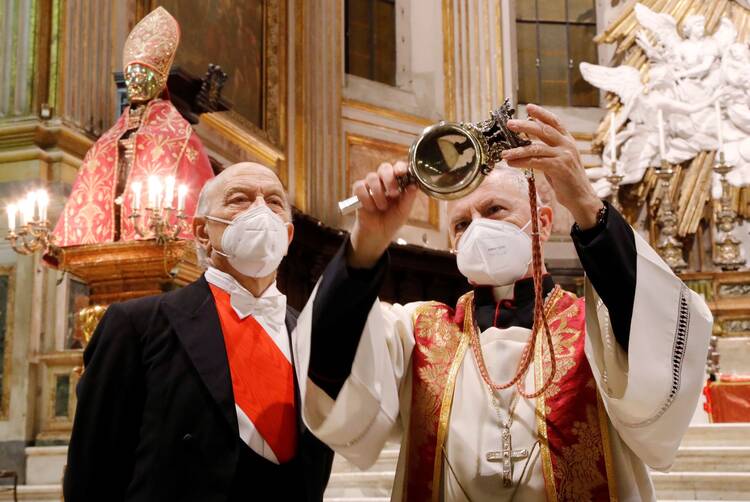 Msgr. Vincenzo de Gregorio, abbot of the Chapel of St. Januarius in Naples Cathedral in Italy, holds a reliquary containing the saint's blood Dec. 16, 2020. Naples residents gauge the saint's pleasure with them by awaiting the blood's liquefaction three times a year, including Dec. 16, the local feast commemorating the averting of a threatened eruption of Mount Vesuvius through his intervention. (CNS photo/Ciro De Luca, Reuters)

A Reflection for the Memorial of Saint Januarius

Today the church celebrates the Optional Memorial of St. Januarius, bishop and martyr. Januarius was a third-century bishop and martyr who possibly suffered under the persecution of Roman Emperor Diocletian. Somewhere along the way, Januarius (known to Italian Americans as “Genaro”) wound up buried in the cathedral in Naples, Italy, which is where I met him.

I was backpacking alone in Italy when I wandered into the Cathedral of St. Januarius. As I was taking in the breathtaking beauty near the altar, something extraordinary happened. A cleric was bringing out what I thought was a monstrance holding the Eucharist. I was suddenly surrounded by a sea of people, all clamoring for a chance to kiss whatever the priest was holding.

I discovered, through some broken Italian-English questioning, that it was actually a vial containing Januarius’ blood. The blood is supposed to miraculously liquify three times a year, his feast day being such an occasion, and I serendipitously found myself with a front row seat. If the blood does not liquify, the Neapolitans take it as an ominous premonition. The church has not officially recognized it as a miracle, but the popular religion of the region takes it as Gospel. (I will let you, reader, decide for yourself.) Lucky for me, it liquified in 2013, a good sign for a 20-year-old ready to explore a new city.

Somewhere along the way, St. Januarius (known to Italian Americans as “Genaro”) wound up buried in the cathedral in Naples, Italy, which is where I met him.

A couple years after I was in Naples, Pope Francis made a visit to St. Januarius’ cathedral. When Pope Francis picked up the relic containing the vial, the blood started to liquify, even though it was not one of the three days of the year when it was supposed to. But only sort of. The archbishop of Naples exclaimed to the crowd, “The blood has half liquefied, which shows that St. Genaro loves our Pope and Naples!”

Pope Francis wasn’t so sure. He chimed in, “St. Genaro only half loves us; he is asking us to make an even greater effort (at conversion).”

I think Pope Francis was getting at the heart of how we should understand miraculous events: It’s okay if they at first inspire awe and wonder, but they then ought to call us to greater conversion, greater action, greater love. I am reminded of the disciples at the Ascension of Jesus, who are admonished by an angel “Men of Galilee, why are you standing there looking at the sky?” The implicit message? Get busy.

Today, let’s remember that after we are gazing up at the sky, or at a liquified vial of blood, we are called to look inward and out toward our brothers and sisters.