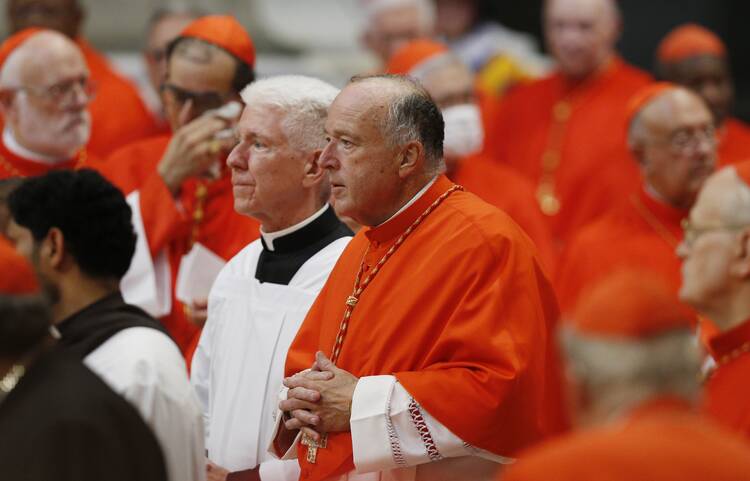 Pope Francis held a solemn but simple ceremony in St. Peter’s Basilica this afternoon in which he created 20 new cardinals. Sixteen of those who received the red hat are electors—including one American, Robert W. McElroy of San Diego, Calif.—meaning they will have the right to vote in the conclave to elect his successor. The other four are over the age of 80 and so do not have a right to vote in a conclave.

By this act Pope Francis has brought the total number of electors to 132, from 69 countries. That number, however, will gradually decrease over the coming year as electors reach the age of 80 and lose the right to vote. By Sept. 17, 2023, it will have been reduced to 120.

Francis has created 83 of the present 132 electors, which amounts to 63 percent of them. The Vatican statistics show that 53 of the 132 electors are from Europe, 38 are from the Americas (north and south), 21 from Asia, Africa 17 and 3 from Oceania. Today’s ceremony means that College of Cardinals now has a total of 226 members from 90 countries, 94 of whom cannot vote in a conclave.

These statistics reveal that Pope Francis has significantly changed the composition of the electoral college since the last conclave in 2013. He has internationalized its membership through a reduction in the number of European and Italian cardinals and a significant increase in the number of cardinals from Asia, Africa and Latin America, by making cardinals from countries that never had a cardinal before. In his eighth consistory, Francis has given the red hat for the first time ever to prelates from Mongolia, Paraguay, Singapore and Timor Leste. He also gave the red hat to the first ever cardinal from Amazonia, and a first cardinal from the Dalits (the untouchables) in India, who make up 64 percent of the country’s 19 million Catholic population.

At the start of today’s ceremony, the 20 new cardinals processed into the crowded basilica, wearing for the first time the scarlet robes that are the distinctive ceremonial dress of a cardinal and a white surplice.

There was an air of excitement among the 180 cardinals present who are already members of the College of Cardinals (the total number before today was 206, but some could not come), and the thousands of faithful in the basilica that had come from countries in Asia, Africa, Europe and the Americas to participate in this historic event, among them government delegations and relatives of the new cardinals. Cardinal McElroy’s brother and sister, for example, together with many of his friends from the San Diego diocese and from across the United States were present in the basilica. However, his 97-year-old mother followed the ceremony on television back in California, the cardinal told America. Cardinal McElroy is the fifth American cardinal created by Pope Francis, bringing the total number of American electors to ten.

As Pope Francis entered the basilica, the schola sang “Tu Es Petrus” (“You are Peter”). After taking his place in front of the confessional (below the high altar), he opened the ceremony by making the sign of the cross. Then the English-born archbishop Arthur Roche, the prefect of the Dicastery for Divine Worship and the Discipline of the Sacraments, and the first named on the list of new cardinals, addressed the pope in Italian, on behalf of the new cardinals, thanking him for conferring this honor on them.

Addressing the pope, Archbishop Roche said, “As diocesan and religious priests, we are at the service of preaching the Gospel in many different ways and in different cultures, but always united in the one faith and the one Church. Now, in manifesting your trust in us, you call us to this new service, in an even closer collaboration with your ministry, within the broad horizon of the universal Church.”

He concluded his expression of thanks to the pope saying, “Our mission today is to help you carry the cross and not to increase its weight. With great joy we wish to walk at your side knowing that to you have been entrusted the keys of the Kingdom.”

Next, a deacon read a passage from the Gospel according to St. Luke (12:49-50) that said, “I have come to bring fire on the earth, and how I wish it were blazing already.” Pope Francis then gave a homily commenting on that text and told the new cardinals: “With those words found in the Gospel of Luke, the Lord calls us once more to follow him along the path of his mission. A fiery mission–like that of Elijah–not only for what he came to accomplish but also for how he accomplished it. And to us who in the church have been chosen from among the people for a ministry of particular service, it is as if Jesus is handing us a lighted torch and telling us: “Take this; as the Father has sent me so I now send you” (Jn 20:21).”

“In this way”, he said, “the Lord wants to bestow on us his own apostolic courage, his zeal for the salvation of every human being, without exception. He wants to share with us his magnanimity, his boundless and unconditional love, for his heart is afire with the mercy of the Father.”

Pope Francis said, “This is the same powerful fire that impelled the Apostle Paul in his tireless service to the Gospel, in his “race”, his missionary zeal constantly inspired by the Spirit and by the Word. It is the fire, too, of all those men and women missionaries who have come to know the exhausting yet sweet joy of evangelizing, and whose lives themselves became a gospel, for they were before all else witnesses. This, brothers and sisters, is the fire that Jesus came to “bring to the earth”, a fire that the Holy Spirit kindles in the hearts, hands and feet of all those who follow him.”

Addressing his “dear brother Cardinals,” he said, “A Cardinal loves the church, always with that same spiritual fire, whether dealing with great questions or handling everyday problems, with the powerful of this world or those ordinary people who are great in God’s eyes.”

He recalled the example of Cardinal Agostino Casaroli, the famous Vatican diplomat who he said was “rightly famous for his openness to promoting, through farsighted dialogue the new prospects that opened up in Europe following the Cold War” and he remarked alluding to the present conflict in Ukraine “may God prevent human shortsightedness from closing anew those prospects that he opened!”

He recalled, however, that “In God’s eyes, however, the visits that he regularly made to the young inmates in a juvenile prison of Rome, where he was known simply as “Don Agostino”, were just as important.”

He also recalled the example of the Vietnamese Cardinal Van Thuân who was “called to shepherd the People of God in another crucial scenario of the 20th century, who was led by the fire of his love for Christ to care for the soul of the prison guards who watched over him at the door of his prison cell.”

Addressing the whole congregation, Pope Francis said, “Dear brothers and sisters, let us once more contemplate Jesus. He alone knows the secret of this lowly grandeur, this unassuming power, this universal vision ever attentive to particulars. The secret of the fire of God, which descends from heaven, brightening the sky from one end to the other, and slowly cooking the food of poor families, migrant and homeless persons. Today too, Jesus wants to bring this fire to the earth. He wants to light it anew on the shores of our daily lives. Jesus calls us by name; he looks us in the eye and he asks each of you cardinals: Can I count on you?”

Jesus calls us by name; he looks us in the eye and he asks each of you cardinals: "Can I count on you?”

He concluded his homily by asking the cardinals to pray for one of the new cardinals–Richard Baawobr from Ghana, former superior general of the Missionaries of Africa (the White Fathers) who came to Rome to receive the red hat but ended up in the hospital some days ago. He will receive the red hat at a later date.

After the homily, Pope Francis read the act by which he created the new cardinals.

He said this act of his papal ministry by which he calls some of “our brothers” to become members of the College of Cardinals concerns not only “the church of Rome” but also the entire church community worldwide, “because they will be united to the See of Peter with a closer bond, become members of the clergy of Rome, and cooperate more intensely with our apostolic service.”

He told them that “having been invested with the sacred purple, they are to be fearless witnesses to Christ and his Gospel in the city of Rome and in faraway regions.” He then proclaimed them to be cardinals and invited them to recite “the profession of faith in the Triune God” and “the oath of fidelity to the holy, Catholic and apostolic Church.”

After that, he invested each of them with insignia of office: a red biretta, a ring and the title to a church in the diocese of Rome.

As he gave the biretta to each cardinal, he said, “receive the scarlet biretta as a sign of the dignity of the cardinalate, signifying your readiness to act with courage, even to the shedding of your blood, for the increase of the Christian faith, for the peace and tranquility of the People of God, and for the freedom and growth of the Holy Roman Church.”

As he gave each new cardinal their ring he reminded him that “your love for the church is strengthened by the love of the Prince of the Apostles.” Finally, he gave each one a scroll (document) containing a title to a church in the Rome diocese, and gave each the kiss of peace.

Pope Francis then led them all in singing the Our Father in Latin.

Then the pope presided over the consistory—that is the assembly of cardinals called by him—for the purpose of approving the canonization of new saints.

After the ceremony in St. Peter’s, Pope Francis took the 20 new cardinals to visit Benedict XVI, the emeritus pope, at the Mater Ecclesiae monastery, behind St Peter’s Basilica, where he lives. There they received his blessing, together with that of Pope Francis and, after praying together the Salve Regina, the new cardinals returned either to the apostolic palace or to the Paul VI audience hall where, following tradition, they received courtesy visits from friends and well-wishers.

The 20 prelates who received their red hats from the pope were Cardinals:

-- Arthur Roche, 72, prefect of the Dicastery for Divine Worship and the Discipline of the Sacraments.

-- Lazarus You Heung-sik, 70, prefect of the Dicastery for Clergy.