The wisdom of ‘Jaws’ and the prophet Jeremiah: Responding to cries for help is a holy thing to do 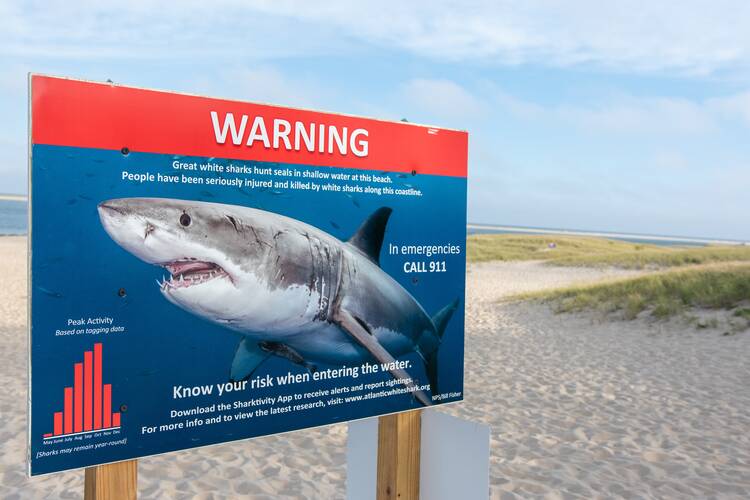 Photo by Rusty Watson on Unsplash

Having come home safely from Cape Cod, and having not been attacked by anything more bloodthirsty than my 7-year-old who wanted to share my ice cream cone, we decided it was safe to sit down and watch the movie “Jaws.”

It is just about a perfect movie, a rare film that is monstrously famous but still somehow even better than all the hype. Even as I mouth each line along with the characters and follow every facial movement beat by beat, I find something different to admire every time I watch it.

This time, it was the girl. Not Chrissie, the girl who launches the film by getting gobbled up, but the girl in the kerchief, the one who is standing on the rocks by the estuary and calls out a warning to the crowd in a quavering voice: “Sh— shark! The shark! It’s going into the pond!”

She’s scared of two things, as far as I can tell. She’s scared of the shark, of course, which by this point has already devoured four people and a dog. But at least for a second, she’s also scared of being wrong.

Just a few seconds prior, the entire beach was swallowed up in a panic when someone spotted a fin in the waves. Someone screamed “Shark” then, too, and there was instant hysteria. Children were trampled; a mother lost her mind with fear and screamed uselessly, clutching her baby and freezing in place. An old man was left to drown in the foam as the entire populace scrambled to escape the water. And as the bathers panted and trembled on the beach, dry sobs rising up from the crowd, the word came back: It was “just a hoax. There are two kids with a cardboard fin.” (See, I told you I could quote the movie line for line.)

But before these summer people have a chance to contemplate how poorly they have behaved, there is another alarm. The girl by the estuary calls out in a trembling voice, rising to a scream: “Sh— shark! The shark! It’s going into the pond! ... Somebody do something!”

“Now what?” grumbles Chief Brody, whose life has been nothing but alarms since he moved to the quiet island of Amity. But his wife reminds him their son Michael is in the pond, so he strides over to investigate. And yes, there is the fin. And this time, it is real.

I think about this girl a lot, the girl who cried shark. I know why her voice quavered. It is the worst feeling in the world to think something terrible is happening, but not to be completely, irrefutably sure. What if you’re wrong, and it’s not a shark at all? What if you look foolish and insane? What if you raise the alarm and everybody runs, and there’s screaming and trampling and sobbing, but it’s all for nothing, and it turns out you’re just wrong and stupid?

But what if you’re right?

Sometimes, you don’t have the luxury to sit around and put your feet up to contemplate the possibilities, because the stakes are so high. And so, even though you are afraid, you shout and scream and hope someone will listen.

If you are feeling weak and quavery, but the stakes are very high, go ahead and shout it anyway.

Vaulting past this fear is a holy thing to do.

Maybe this scene especially stood out for me because we watched it on Sunday, the same day as we heard the reading about Jeremiah the prophet, and how popular he became with his own yelling and screaming. The general sentiment in that town was:

“Jeremiah ought to be put to death; he is demoralizing the soldiers who are left in this city, and all the people, by speaking such things to them; he is not interested in the welfare of our people, but in their ruin.”

So they lowered him into a well and he sank into the mud, and the plan was just to leave him there until he learned to shut up because he was dead, I guess.

The thing that struck me about the day’s reading (which I have heard countless times, although not as many times as I have watched “Jaws”) was that Jeremiah must have called out to God when he was down there in the mud. I imagine he prayed to God to save him, to deliver him, to pull him out. Maybe he was even thinking of other prophets who had been miraculously delivered from the jaws of death by unmistakable divine intervention. Lions’ mouths sealed; waters parted; fire descending from heaven. O Lord, thou pluckest me. Of course he called out to the Lord for some of that.

But what actually happened was a court official went to the king and talked him out of this plan to leave Jeremiah in a well, and the king listened. So he sent some guys and they pulled Jeremiah out of the well. And this surely was an answer to prayer, if not a spectacular one. It even says so in the responsorial psalm that follows:

“The LORD heard my cry. He drew me out of the pit of destruction, out of the mud of the swamp.”

Do you see how that works? How God responds, and what his action looks like? It looks like some guy going and arguing with the king, and then heading over to the well with a bunch of strong friends and a rope. Presumably he heard Jeremiah preaching and listened to what he was saying. Maybe he even heard Jeremiah shouting from down in the well. Either way, it was one man hearing another man’s cries and responding to them.

A holy thing to do.

You all know that, in the movie “Jaws,” the shark is not really the monster. The shark is, Hooper tells us, just “a perfect eating machine” and “all this machine does is swim and eat and make little sharks and that’s all.” It’s not a monster. The monster is the ravenous, tourist-dollar-hungry god Amity and all its the various smiling, sun-tanned acolytes who know there is danger, or think there might be danger, or are told there is danger, and don’t do anything about it, or who actively fight against doing something about it. Or who make the strategic decision to leave 1,100 soldiers bobbing in the dark water all night long, because they have to deliver the bomb.

This is an essay in favor of hearing other people’s cries—and responding—because it is a holy thing to do.

And this is an essay in favor of shouting “shark,” even if you’re scared you’re wrong. If you are feeling weak and quavery, but the stakes are very high, go ahead and shout it anyway. It is a holy thing to do.