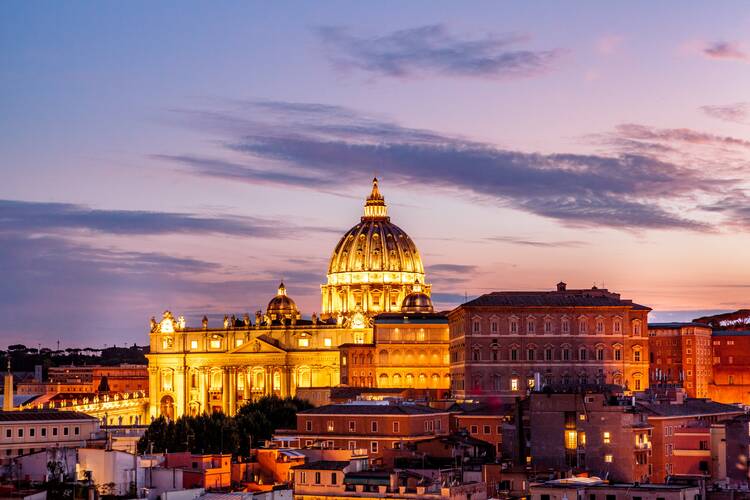 My husband and I arrived for our six month winter stay in Rome on a rainy day in mid-November 2021. We had two large duffels of clothes and one of books, iPads, some kitchen utensils and maps. I had been to Rome countless times over the last 40 years and recently spent two winters in the zone called Testaccio. We loved it so much, we decided to stay there again.

After settling into our rental on the fifth floor overlooking the Tiber River, we took a walk in our neighborhood to help with the jet lag and have a quick bite in a nearby bar. The rain had stopped briefly; the pavement was still wet and peppered with fallen sycamore leaves. In the piazza called Liberatrice a homeless man paced back and forth following what seemed to be a precise 10-foot line reciting something rhythmic.

And tied at his neck with a rope was an old teal blue living room drape.

His headwear was a white cloth helmet like one you might expect on the head of a third-century desert father, and over his bony frame he wore a big loose-fitting shirt with linen pants that were tattered but clean. On his feet, a pair of navy blue crocs over white crew socks.

And tied at his neck with a rope was an old teal blue living room drape. It had faded gold fringe tassels running across the bottom. It flowed down his back like a child playing king. His face, filled with white whiskers, gazed downwards.

The piazza he lived in was central to our new neighborhood, itself much like a village within Rome. It was unsettling to think he was living so close by. He would be unavoidable.

When I am in the states, I live in an upscale Maine town where you see no homeless people on the streets; they are separate from daily life. They dwell in cities, in priests’ homilies and during donation drives. People like me do not interact with them except for dropping an occasional coin.

It was unsettling that he was living so close by. He would be unavoidable.

The next morning, a Sunday, I left my snoring husband in search of coffee. The path to the cafe took me through the middle of Liberatrice in the dark. Every step took me closer to the sound of more snoring until I passed the entrance to the local branch of the Monte dei Paschi. In front of the entrance to the bank was a makeshift wall made of cardboard pasted with an image advertising Parmalat Pomodori. The snoring was coming from here.

Afraid, I crossed to the other side; the city was still empty. I got my coffee and returned home, wondering what I could give the snorer. Leaving our apartment later that morning for Mass, I brought a fresh clementine for my return trip across the piazza. Passing the makeshift shelter, I left the fruit on the stoop barely inside the cardboard, avoiding contact. Immediately, a joyful voice: “Buon giorno.” Startled, I peered over the barricade and saw the homeless man from before. He was flat on his back, wedged into the space with a blue and green plaid blanket, listening to music on a beat-up phone. Looking at the clementine on the stoop he said, “toss it to me.” Out of my element, I picked up the fruit and gently threw it into hands cupped near his neck. “Grazie,” he said.

That this homeless man said “pray for us” and not just “pray for me,” lingered all morning.

Having never spoken to a homeless person and not wanting to linger, I said, “I need to go.” He began to peel the clementine and asked where I was going. When I said to Mass, he said, “prega per noi.” Pray for us.

That this homeless man said “pray for us” and not just “pray for me,” lingered all morning.

A few days later, I wore an Irish cape I had recently bought, made from a mix of cashmere and merino wool. I had wanted a cape so much that, even though they were expensive, I purchased two of them. One was red and the other forest green.

I had always admired tastefully well-dressed Italian ladies, and had longed for the day I might join their ranks. This day, my red cape thrown across my shoulders, I felt like I had arrived. I was in Rome with a luxurious garment, strutting across a piazza where I would have worn a backpack and patched Levi’s in younger student days, too poor to really enjoy the city. Now, feeling confident with my appearance and haircut and handmade stylish “Alcione” glasses, I was finally somebody in Rome; a well dressed Signora who recently retired from a landscaping position on a famous property in coastal Maine.

My red cape thrown across my shoulders, I felt like I had arrived.

The pavement had dried in the piazza, and the cape moved with the breeze and my brisk walk. Children, dog walkers and old timers filled the square—I had an audience. I was that somebody for about a minute. Then a figure like Superman ran toward me. It was the homeless man who was flying on foot in my direction. He had changed out of the curtain he had been wearing when I first arrived and now had a red velvet drape on his back. It was tied at the neck and flowed in the wind; the hue of his drape matched that of my cape. The motion of his garment in the breeze was the same as mine.

He jumped over next to me and held the material of his drape up next to my cape. “Lo stesso, ci siamo lo stesso—davvero!”

He looked at me with piercing blue eyes, smiling in an all-knowing way. I asked his name. He said Mooghi. I said I was Anna. When he ran off, I began to laugh at the absurdity of being puffed up with pride by the new cape, then knocked down to size in a flash.

He held the material of his drape up next to my cape. “The same, we are the same—really!”

Over the next few hours something began to seep into me. I began to see the encounters with Mooghi on a deeper level, the level where the insight begins to pierce the veil.

I have interacted with Mooghi since then. Once, he pointed his hand like an orchestra conductor and sang each letter in my name (A.N.N.A.) on a musical scale, his mouth wide open showing mostly gum. I asked if he was a musician, and hopping back on one foot, holding his right ear, he said in Italian “listening is always important.”

Listening to, and seeing, the other are always important. Because no one is really the other. Nothing separates us, because we are the same. 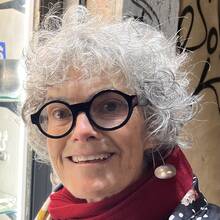 Annie Kennedy recently retired as private gardener for a large estate in Kennebunkport, Maine. She lives in Southern Maine and Rome, Italy.