God, our father, calls for justice and hospitality 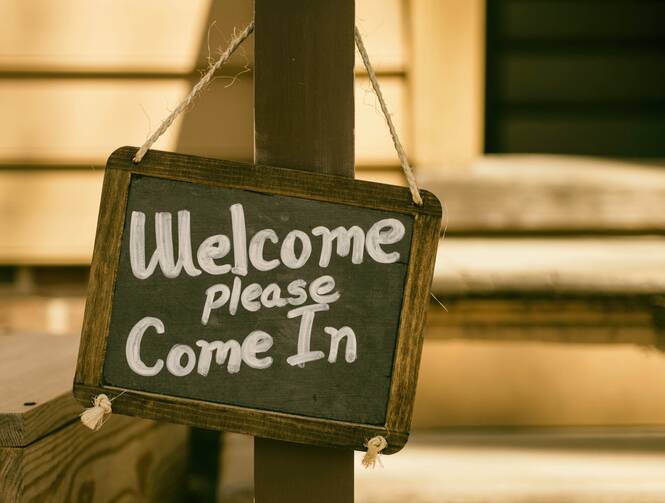 During the Fourteenth Sunday in Ordinary Time, we encountered an image of God as mother. In today’s Gospel, we hear language depicting God using the image of a father. The first reading and the Gospel depict God as a just father who invites us to participate in justice and who requires hospitality from all people. These readings call on us to create a more just and welcoming society.

What can you do to promote justice and equality?

Are you inspired by the themes that are prominent in today’s readings?

How can you welcome the stranger in your community?

The first reading from Genesis describes a dialogue between God and Abraham in which God shares plans to punish Sodom and Gomorrah. Before the destruction occurs, Abraham presses for God to spare those who are righteous: “Should not the judge of all the world act with justice?” Abraham advocates for innocent people who might be just so that they would not perish in the destruction. The cities are destroyed in the following chapter of Genesis on account of their lack of hospitality, as the people attack rather than welcome strangers. The exchange in the first reading shows Abraham’s persistence and interest in protecting innocent parties. Ultimately, in the narrative, the cities are not spared, as no just and righteous people can be found.

The critique against the hospitality of the people of Sodom and Gomorrah is an important element that is not always highlighted. Unfortunately, the story has been misused to attack and condemn people based on sexual orientation, yet the tradition is rooted in a critique of inhospitality and injustice toward outsiders. Abraham and his nephew Lot demonstrated how to greet strangers, offering food, lodging and protection in the land. The people of Sodom and Gomorrah, on the other hand, fail in this regard which leads to their destruction.

The Gospel reading from Luke echoes this concern for hospitality. At the end of the reading, Jesus gives examples and rhetorical questions that call for reflection and action: If a friend asks for three loaves of bread, would you say “do not bother me” or would you offer them food? “What father among you would hand his son a snake when he asks for a fish?” The questions invite hearers to think about how they should respond to the needs of others. These ideas build on the Good Samaritan parable we encountered two weeks ago, which centered on love, care and mercy.

Unfortunately, the story of Sodom and Gomorrah has been misused to attack and condemn people based on sexual orientation, yet the tradition is rooted in a critique of inhospitality and injustice toward outsiders.

The themes of justice and hospitality are incredibly timely, as many people have shown a disinterest in justice and have promoted unwelcoming attitudes and policies. Jesus calls on his followers to be advocates like Abraham, being mindful of those who are unjustly accused and speaking truth to power, even divine power, for the sake of justice. What can we do to be proactive and persistent like Abraham to fight for justice, especially at a time when racism, sexism, classism and other categories of discrimination are widespread?

Our readings also remind us that hospitality and welcoming the stranger are foundational principles of discipleship, principles required and modeled by God, our father. We must work to create a society that promotes inclusion over exclusion.