The joy of wearing Catholic socks 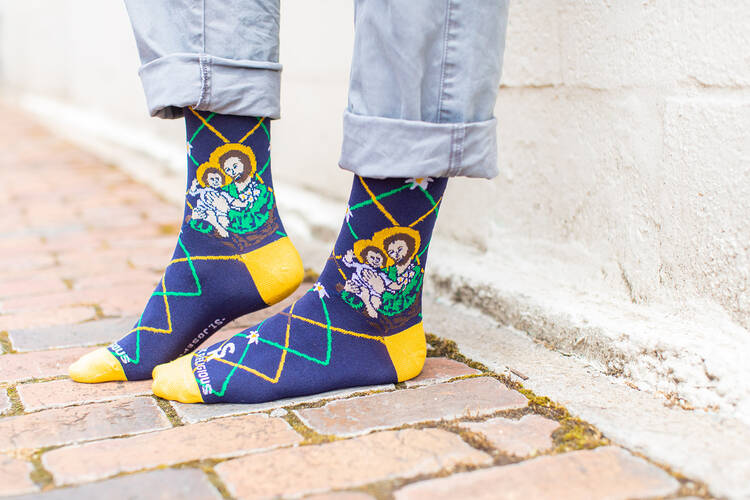 You wouldn’t think the socks you wear would have a great effect on your day, but for some Catholics, they do. Whether it’s in wearing St. Michael for a job interview, Mother Teresa for a day of volunteering or St. Ignatius for a celebration of everyone’s favorite religious order, many place great importance on their footwear thanks to Sock Religious.

Patrons of the Catholic sock-making company, Sock Religious, choose from a wide array of socks, most of which feature an icon of a saint or other Catholic figure, images related to their story and, on the sole, a quote or prayer attributed to them (“Ora et Labora,” for St. Benedict and “Life is worth living” for Archbishop Fulton Sheen). Sock Religious, based in Indianapolis, encourages this kind of devotion. Founded on the principle of “starting conversations through joyful products,” the five-year-old business aims to bring joy to its customers and greater glory to God.

Its first footfall in the hosiery business began with an image of the pope. In the fall of 2017, founders Scott and Elizabeth Williams and Madison Cipoletti completed a design for Pope Francis socks. That November, the National Catholic Youth Conference came to Indianapolis, so the team set up a booth to test the product.

Its first footfall in the hosiery business began with an image of the pope.

“We ended up selling out of socks on the first day-and-a-half of the conference,” Ms. Cipoletti recalled, and they realized their idea had real potential. Ms. Cipoletti is now the creative director of Sock Religious and its umbrella brand, Catholic Concepts.

The company expanded quickly, advancing from fulfilling orders out of a spare bedroom to a complete sock-knitting factory. “It was always a dream of Scott’s to be able to make our own socks, to manufacture them [in the United States] and not have them made overseas,” she said. “We knit our first sock in-house on Feb. 18, 2021.”

Now housed in a 10,000-square-foot facility, Sock Religious employs 22 people and sells to tens of thousands of customers. “God has really blessed every part of the growth of our company,” Ms. Cipoletti said.

Now housed in a 10,000-square-foot facility, Sock Religious employs 22 people and sells to tens of thousands of customers.

The company's spiritual impact has tracked its material success. Customers say they often don the socks as a form of prayer; some have worn them through cancer treatments. “I’ve even heard recently that someone’s been buried in our socks,” Mr. Williams, the C.E.O., recalled. “When they need a little extra strength for a job interview, they’ll wear their St. Michael socks.”

“A lot of women will wear them while they’re giving birth,” Ms. Cipoletti added. “It’s just beautiful to have a tangible, physical reminder that the saints are always with us.” The Sock Religious website also shows groomsmen wearing their favorite socks to wedding ceremonies.

Augustine Preziosi, a junior at Fordham University, is a member of Sock Religious’s “All Saints Sock Club.” He gets a new pair of saintly socks each month.

“When I go to class, people are always looking at my feet to see what pair of socks I’m wearing,” he said, recalling his theology classmates’ joy at seeing him wearing St. Thomas Aquinas socks on the days that they studied the Summa Theologica. “It really excites people.”

“When they need a little extra strength for a job interview, they’ll wear their St. Michael socks.”

Ms. Cipoletti and Mr. Williams also said the socks may be a means of divine intervention. “The Lord has definitely worked through this greater visibility of the saints in the world,” Ms. Cipoletti said.

They shared a story of a woman who had been experiencing a period of spiritual desolation. She promised one morning in prayer that if something outlandish happened, like an interaction with the pope, she would return to her faith. Later that day, while boarding a plane, she did indeed run into the pope—woven on another passenger’s socks.

“There’ve been some really cool ‘God moments,’” Ms. Cipoletti said. For example, the company's Padre Pio socks read, “Pray, hope and don’t worry.” “That sock launched like two weeks into the Covid shutdown.” Pointing her index finger upward, Ms. Cipoletti added, “I think someone else was doing the planning.”

“Especially during times of sorrow and struggle,” Mr. Preziosi said, “why not have St. Padre Pio reminding you to hope and pray and not to worry?”

The Sock Religious team recently expanded their operation to manufacture a wider array of products. Under a new brand name, Catholic Concepts, the Williamses and Ms. Cipoletti are launching products like Live Liturgically, a Catholic family planner; States of Faith, shirts that depict the parts of a rosary; and 4 Marks Printing, which partners with parishes and communities around the country to create clothing and products for special events.

It’s a serious mission, but the people of Sock Religious don’t let it interfere with their sense of humor. Indeed, they exemplify a kind of tongue-in-cheek piety which extends to the brand’s very name. (“Say it out loud,” their Twitter profile instructs, for those who may not get the joke.) They’re not averse to self-deprecation—claiming on their website to be the “World’s Largest Catholic Sock Company…probably”—or even a light ribbing of certain saints, such as St. Joseph, whose socks display no words but only empty quotation marks, a playful reminder of Joseph’s distinct reticence in the Gospels.

This light-hearted approach to evangelization has proved a crowd pleaser, Mr. Preziosi said, a welcome distraction among his friends from “negativity” and gloomy piety.

This is exactly the company’s goal, Ms. Cipoletti affirmed, quoting Teresa of Ávila: “From silly devotions and sour-faced saints, good Lord, deliver us!”

Far too often, evangelism neglects the joy of Christianity, in Ms. Cipoletti’s opinion: “We need joyful Catholics,” she insisted. “Humor and joy are so contagious, and when you encounter someone who has joy about life or about their faith, it’s attractive and appealing…. Christ is joy, and we want to spread that.”