What happens when an all-male Jesuit school goes co-ed? 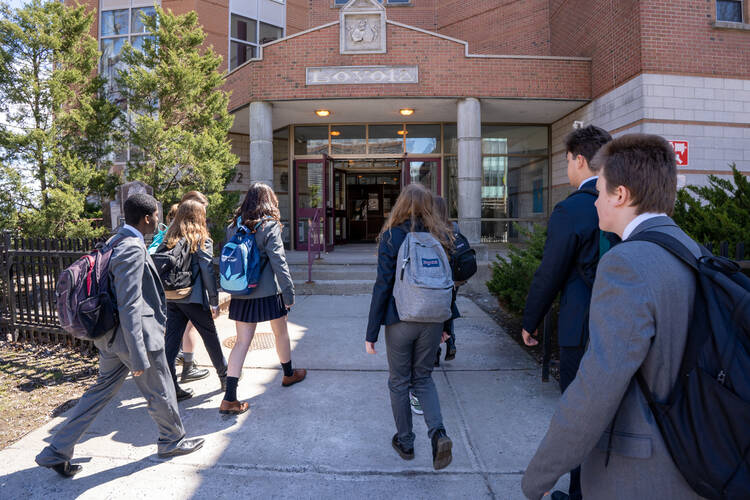 For the past 125 years, Loyola High School in Montreal has been an all-male Jesuit school. But following a bold announcement that the high school will be going coed, that is about to change. To undertake its new mission to educate men, and now women, for others, Loyola will soon be undergoing sizable shifts.

Loyola is the only all-male Catholic school in Montreal and the only Jesuit school in all of Quebec. It is no secret that single-sex educational institutions have been disappearing in recent years; financial struggles and a decline in the number of vocations to religious orders have both contributed to the closing of all-girls and all-boys schools. An accelerating trend of rapid secularization, particularly noticeable in Quebec, only intensifies these effects. But Loyola’s shift to coeducation isn’t a failing or a folding to difficult circumstances, school officials say—it is an intentional transformation, driven by a desire to make Jesuit education more accessible to students. “To open the doors to a Jesuit Catholic school for as many students as we can in the Montreal area is really important to us,” says Annie Beland, vice principal of academics for the junior school and newly appointed vice principal of coeducation.

“To open the doors to a Jesuit Catholic school for as many students as we can in the Montreal area is really important to us.”

Quebec’s educational system is unique, even among other provinces in Canada. Although some of Loyola’s classes are taught in French and most students leave “functionally bilingual,” according to school leaders, Loyola is considered an English-language school. Because of Quebec’s unique system and Francophone culture, to attend English institutions like Loyola, students first need a government certificate of permission. In trying to make Jesuit education easier to access, this is an obstacle that has been hard for the school to mitigate. The solution? Make Loyola more accessible in a different way: by going coed. Although the change does not remove the need for governmental certification, it now will welcome every student who has it, broadening the reach of Jesuit education in the province.

The shift has not been without its controversy. A petition circulating online was signed by nearly 360 people lamenting the loss of the unique atmosphere of Loyola as an all-male school. But Andres Canella, head of the social studies department and both a Loyola alum and a parent himself, does not see it that way. “[With] any change, particularly to a longstanding institution like Loyola, there’s going to be hesitation,” he admits. But “as an alumnus myself, you look back and you say, ‘You know, what was it that made up my experience at Loyola? Was it the fact that it was just boys, [or] was it the fact that it was Jesuit?’”

“The more diversity of any kind you add to an environment, I would argue it makes you a more empathetic and compassionate person.”

Ultimately, he feels the importance of his time at Loyola can be found in the values it instilled in him, not just the single-sex education. He says that other parents and families feel similarly and have long been asking Loyola to accept their daughters alongside their sons, so that both can receive a quality Jesuit education.

“The more diversity of any kind you add to an environment, I would argue it makes you a more empathetic and compassionate person. Being able to befriend people of all kinds makes you understand the situations people are in,” Mr. Canella says. He is excited for the shift and hopes that his two sons will one day attend Loyola. With coeducation, “It’s not about what gender you are. You’re a Loyola student now. It kind of takes that out of the equation.”

Vice Principal Beland agrees. Like Mr. Canella, she enjoyed her own time in single-sex education as a high school student. But despite that, she still feels it is time for Loyola to diversify. “My experience was really, really positive. But I think an environment that mirrors what the world actually is is really important in 2022,” she says. “[As a student,] would I have benefitted from having boys at the school? Absolutely, 100 percent.”

In Quebec, high school runs for five years, from seventh to eleventh grade. (Following graduation is a two-year program between high school and university called cegep, from the French collège d’enseignement général et professionnel, “general and vocational college.”) Accordingly, Loyola’s first coed class will be admitted to their seventh grade for the 2023-24 school year. This allows the upper grades to remain all-male, respecting that those parents and students chose to enroll in Loyola while it was a single-sex school.

Preparations for becoming coed are already underway. Focus groups convened in September, meeting throughout the year to iron out the details of everything from uniforms to sports teams. Construction will start this spring to retrofit bathrooms and locker rooms. The next open house in September 2022 will be open to all prospective students, male and female. And school-wide discussions are being held around teaching pedagogy and student thoughts about coeducation, preparing the students who will be student body leaders when the first coed class arrives.

Coeducation also brings some financial benefits. Although diversity and inclusion were driving factors in the decision to go coed, school leaders say, a boosted enrollment keeps tuition affordable for students while also helping the school thrive. It makes Jesuit education more accessible in more than one way, both opening the doors to girls and making sure that rising costs do not price out lower-income students. The school’s financial aid program helps in that regard as well.

Although the school is changing, “What makes Loyola special is not the fact that it’s an all-boys school. What makes Loyola special is its Jesuit Catholic identity and its values,” Ms. Beland says. “Opening our doors to all genders is something that we feel is going to enhance our community. And then it allows for the mission of being men and women for and with others.” It is a dramatic shift, and one that will take time and careful consideration to do right. But ultimately, in the shift to go coed, Ms. Beland says: “Good teaching is good teaching for all.”

Jesuit School Spotlight is a monthly feature focusing on Jesuit middle and secondary schools. It is underwritten in part by Jesuit high schools of the USA East Province of the Society of Jesus.