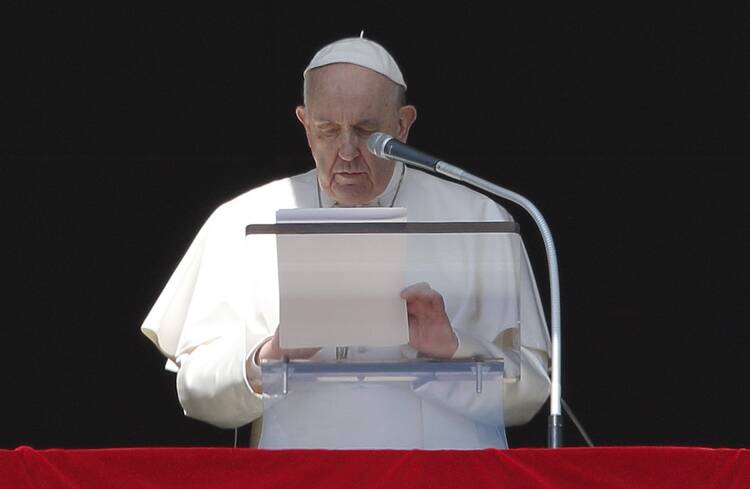 Pope Francis leads the crowd in a silent prayer for peace as he leads the Angelus from the window of his studio overlooking St. Peter's Square at the Vatican in this March 13, 2022, file photo. (CNS photo/Paul Haring)

As the Russian attack on Ukraine entered its 67th day, Pope Francis called on Catholics worldwide to pray the rosary every day during the month of May for peace. He made a new passionate plea to all sides “to avoid a continual military and verbal escalation” and to “embark on the way of dialogue and peace.”

Greeting some 30,000 pilgrims in St. Peter’s Square on Sunday, May 1, Pope Francis said: “Today, we begin the month dedicated to the Mother of God. I would like to invite the faithful and all communities to pray the rosary every day during the month of May for peace.”

He told them, “My thoughts go immediately to the city of Mariupol, the city of Mary, that has been barbarically bombed and destroyed.” When Russian President Putin ordered the invasion of Ukraine on Feb. 24, Mariupol had a population of over 400,000 people. While three-quarters of the population managed to flee, 100,000 remained and are surviving underground in what is now an almost totally devastated city after daily bombing by Russian forces.

As the Russian attack on Ukraine entered its 67th day, Pope Francis called on Catholics worldwide to pray the rosary every day during the month of May for peace.

The mayor of Mariupol reports that 20,000 inhabitants have been killed during the bombing, and the only part of the southern port city that remains under Ukrainian control is the Azov steel plant, which is being bombed every day by the Russians. Pope Francis spoke about that today and said, “Again today, from here, I renew the request that secure humanitarian corridors be made available for the persons trapped in the steel plant of that city.”

Ukrainian sources say there are some 1,000 civilians—including women and children—and around 2,000 Ukrainian soldiers (including some 600 wounded soldiers) inside the steel plant. Most of the civilians are said to be family members of the soldiers. Those inside the plant now lack food, water and medicine and are living in inhuman conditions.

Both Pope Francis and U.N. Secretary General António Guterres, who recently visited Moscow, appealed to President Vladimir Putin to allow the evacuation of those inside the steel plant. On April 30, some 20 people, including women and children, managed to escape, seemingly with the help of the United Nations and Red Cross. The United Nations and International Committee of the Red Cross confirmed that further evacuations are underway today but gave few details as of this writing.

“Today, we begin the month dedicated to the Mother of God. I would like to invite the faithful and all communities to pray the rosary every day during the month of May for peace.”

It also seems that the agreement “in principle” to an evacuation given by President Putin to the U.N. secretary general only related to civilians and not to soldiers, and for this reason the wives of four of the soldiers came to Italy to plead for the inclusion of the soldiers in the evacuation program.

Speaking more broadly of the war, to which there is no end in sight, Pope Francis said, “I suffer and I cry thinking of the suffering of the Ukrainian population, and in a special way for the elderly and the children.” When the war started, Ukraine, the second largest country in Europe after Russia, had a population of 44 million people. Today, more than five million have become refugees in neighboring countries, and over six million are internally displaced. Many towns and cities have been reduced to rubble.

Pope Francis also drew his audience’s attention to “the terrible news” that comes from Ukraine “of children expelled and deported.” On April 30, the Russian Federation’s foreign minister, Sergei Lavrov, said “one million people” have been “evacuated” from Ukraine to Russia since Feb. 24 when Russian forces entered the country. Ukrainian authorities, on the other hand, accuse Russia of deporting them against their will, a great many of them children or minors, and charge that many orphaned Ukrainian children are being put up for adoption in Russia. Some of the deported who managed to escape confirmed this news to international media.

“I beg you, let us not surrender to the logic of violence, to the perverse spiral of weapons. May the path of dialogue and peace be taken!”

“And while we are witnessing a macabre regression of humanity,” Pope Francis said referring to those reports, “I wonder, along with so many anguished people, if peace is truly being sought; whether there is the will to avoid a continued military and verbal escalation; whether everything possible is being done to silence the weapons.”

He added, “I beg you, let us not surrender to the logic of violence, to the perverse spiral of weapons. May the path of dialogue and peace be taken!” He then invited everyone to join him in a silent prayer.

Aware that no less than seven journalists have already been killed during the war in Ukraine and others have been injured, Pope Francis recalled that we celebrate World Press Freedom Day on May 3, a day that was established by the U.N. General Assembly in 1993.

“I render homage to the journalists that have paid with their own lives in service of this right,” the pope said. He recalled 47 journalists were killed and more than 350 were imprisoned around the world last year. He extended “a special thanks” to all those who “with courage, inform us about the wounds of humanity.”

Earlier, on March 6, Pope Francis expressed his appreciation and praise for the women and men journalists “who put their lives at risk” to inform the world about the war in Ukraine. “Thank you, brothers and sisters, for this service that allows us to be close to the tragedy of that population and enables us to assess the cruelty of war,” he said.