When you’re afraid, keep your eyes on Jesus 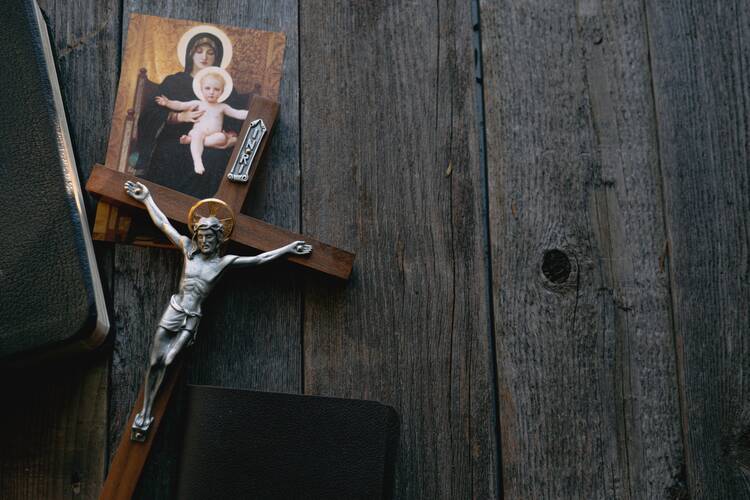 A Reflection for the Third Sunday of Easter

Remember that old phrase, “custody of the eyes?” It means looking away from that which might be tempting us to do wrong. Good advice, because the longer you look, the harder it is to turn away. But the Gospel proposes a more fundamental custody of our eyes. We need to keep them fixed upon the Lord, especially when we are afraid.

The Red Badge of Courage, the most famous novel of the American civil war, is not about strategies or the clash of armies. It is the experience of a single Union soldier, a boy named Henry Fleming. Remember when a terrified Henry runs from battle? Do not forget that the youth and his regiment had stood firm in the face of the first charge. But when the rebels charge a second time, Henry loses all focus.

To the youth it was an onslaught of redoubtable dragons. He became like a man who lost his legs at the approach of the red and green monster. He waited in a sort of horrified, listening attitude. He seemed to shut his eyes and wait to be gobbled.

A man near him who up to this time had been working feverishly at his rifle suddenly stopped and ran with howls. A lad whose face had borne an expression of exalted courage, the majesty of he who dares give his life, was, at an instant, smitten abject. He blanched like one who has come to the edge of a cliff at midnight and is suddenly made aware. There was a revelation. He, too, threw down his gun and fled. There was no shame in his face. He ran like a rabbit.

Others began to scamper away through the smoke. The youth turned his head, shaken from his trance by this movement as if the regiment was leaving him behind. He saw the few fleeting forms.

He yelled then with fright and swung about. For a moment, in the great clamor, he was like a proverbial chicken. He lost the direction of safety. Destruction threatened him from all points.

Directly he began to speed toward the rear in great leaps. His rifle and cap were gone. His unbuttoned coat bulged in the wind. The flap of his cartridge box bobbled wildly, and his canteen, by its slender cord, swung out behind. On his face was the horror of those things he imagined.

It may not seem so at first glance, but St. Peter is doing the same in the Gospel. He has taken his eyes off the Lord, and therefore Peter is falling back in fear, becoming Simon once again.

The Gospel proposes a more fundamental custody of our eyes. We need to keep them fixed upon the Lord, especially when we are afraid.

How do we know that he has lost his focus? Mary Magdalene has already proclaimed her good news to him. He has seen the empty tomb. Peter and the disciples with him at the lake were in the upper room when Jesus appeared to them, not once but twice. These men know that the entire world has changed. The Christ, who was their teacher, is now their risen Lord.

Yet Peter proposes to the others the first, most fundamental temptation of any disciple: taking our eyes off the Lord.

Simon Peter said to them, “I am going fishing.”
They said to him, “We also will come with you.”
So they went out and got into the boat,
but that night they caught nothing.

Of course, they caught nothing. Their vocation is no longer to pull fish from the sea. It is to seek souls. But Peter and his companions are like Henry Fleming and his comrades. They are scared. So they take their eyes off the Lord. Once you do that, you open yourself, like Henry, “to the horror of imagined things.”

Something fearful charges at each of us. And what terrifies us most is not what is happening now but the thought of what might come next.

Something fearful charges at each of us. And what terrifies us most is not what is happening now but the thought of what might come next. We need custody of the eyes. We need to keep them on the Lord. That is the only way to keep from hiding like Peter, or worse, running like Henry.

In our fear and frustration, in the place where we have run or hidden ourselves, Jesus says to us, “Children, have you caught anything?” We must admit we have not. And then we are told to change our ways. “Cast your net over the right side of the boat.”

The charging beast is different for all of us. It was crafted by a malignant creator for each of us alone. But the question and the charge we are given by the Lord remains the same: Do you love me? Keep your eyes on me!